From the moment I met William in 2012, he made it clear that he wasn’t the “commitment type”—he wasn’t interested in marriage, kids, or even getting so much as a goldfish together. For the first two years of our relationship that was perfectly fine with me. I was still in college and he was focused on his career so keeping things low key was ideal.

Eventually though, between our different jobs and hobbies, it felt like we were living two different lives. We loved each other but our future wasn’t clear and I feared that one day we would start to grow apart and split up if we didn’t have anything tying us together. And, I realized that I wanted more with this man I was falling madly in love with.

I decided the easiest way to test the commitment waters was to bring up the idea of getting a dog together though at the time we lived separately. At first, the answer was an automatic “no” and I began to get discouraged. I could see myself possibly marrying this person and he couldn’t even handle the idea of getting a dog together? How would our relationship last if we had such different life goals? Had I made a mistake agreeing to a no-strings-attached relationship in the first place?

But I wasn’t ready to give up on us and it’s a good thing I didn’t because it turns out that William had just needed some time to think about a dog. After a few months, he decided on his own that he was ready to commit—at least to being dog parents—and he had started looking for Chihuahua puppies in secret to surprise me. Then one day he called me out of the blue to tell me about some weeks-old chihuahua puppies at a shelter nearby. I was shocked but I couldn’t have been happier and we started our search for a pet.

Eventually, we decided on Koko, an eight-year-old Chihuahua. We’d wanted a puppy but there was just something about the older dog curled up in a ball on a blanket in the back of the cage at the shelter that tugged at our hearts. She had been in the shelter for over two months and had lost all the hair on her ears from the stress of being there for so long. Her lack of teeth, the fact that she’d birthed multiple litters of puppies, and her fear of people made it even more apparent she had lived a very hard life and had not known much love. It was also clear that we were likely her last chance at being adopted. These are 14 reasons you should consider adopting an older dog.

Surprisingly, it was William who decided that Koko—a dog who would need an immense amount of care, patience, love, and, dare I say it, commitment—was our dog. It was a huge decision but it was the best decision we’ve ever made as a couple. We thought we were rescuing her but from that first moment we got her home to William’s, it was apparent that we needed her as much as she needed us.

Koko immediately brought us closer because she added a new level of responsibility to our lives. Having a dog requires a lot of work and it was something we had no choice but to do together. Taking care of someone else taught us how to jointly talk about and manage our time, money, and resources. Instead of our relationship being about what each of us wanted separately, she gave us a common goal. Great dog owners do these 15 things every day.

She also brought us closer by giving us a reason to spend more time together. William and I had gotten used to making separate plans but we started looking for things we could do together so we could bring Koko. Every weekend we tried to find a new adventure to show Koko everything she’d missed out on previously and we became inseparable. The three of us did everything together, including boating, biking, and going on road trips and vacations, parties, and out to eat.

Then she brought us together literally. When I graduated from college I moved in with the two of them full time. William didn’t even blink at moving up to the next level of commitment to living together—of course, we would live together, we had to take care of Koko!

Through this process, I watched my boyfriend go from a carefree, working professional without any major commitments, to a man with a family and a bigger purpose in life. He’d gone from someone who would change the subject any time I even brought up the word commitment to a man who loved fiercely and openly. Finally, on Christmas Eve in 2017, he decided to make the whole thing official and proposed to me. Even at that moment, Koko stole the show. In the video his mom took of William proposing to me, there she is in the background, eating food off a plate. She’d used the distraction as an excuse to sneak a forbidden treat.

We got married in 2018 and it was a given that Koko would be a part of all of it. We made her an honorary bridesmaid, complete with matching dress, and she walked down the aisle with us, sitting patiently while we shared our vows. We even planned our honeymoon so we could take her with us. We could have traveled anywhere in the world for our honeymoon but we decided to take a ten-day road trip around our home state so that she could come with us.

Our friends and family were surprised at our choice and it definitely involved some extra work. We had to pay extra for pet-friendly rental homes in each city we visited. Not only did we have to load the car up with all of our items, but we also had to pack hers too—you’d be surprised how much gear a seven-pound dog travels with! Throughout the entire trip, we planned our days around going places that we could take her and if we did need to leave her back at the rental home, we made sure it was only for a short time. But every inconvenience was worth it for us to be together.

Back home, Koko continued to strengthen our relationship as husband and wife. By increasing our capacity to love her we also were able to love each other more. That year after our marriage was one of the happiest times of my life. But then she got very sick and it was time to learn a different lesson from her—how to handle extreme stress and loss as a couple.

In 2019 she was diagnosed with pulmonary hypertension, Cushing’s disease, and congestive heart failure. Her illnesses tested us not just emotionally but also physically and financially as she required a lot of vet appointments, expensive testing, several daily medications, and near-constant care. We were devastated that our healthy, vibrant dog was facing these challenges but instead of allowing the stress to pull us apart, our love for her made our relationship stronger. Just like when we first adopted her, the two of us had to band together for the sake of her; the only way to get through this was together. Find out the signs your “healthy” dog is actually sick.

As we did everything we could to help her, we realized that when you truly love someone you’ll sacrifice anything for them and it won’t even feel like a sacrifice, it will be a choice you are privileged to make.

Koko passed away on February 8, 2020. To say we were heartbroken is an understatement. To be honest, we are still completely heartbroken. We only had her for five and a half years, but they were the best years of our lives. But she left us with a lasting gift: Because of her we still have each other. Even though she is physically gone, our marriage continues to stay strong in honor of her.

Thinking about adopting a dog? These are the 14 things you need before bringing home a puppy. 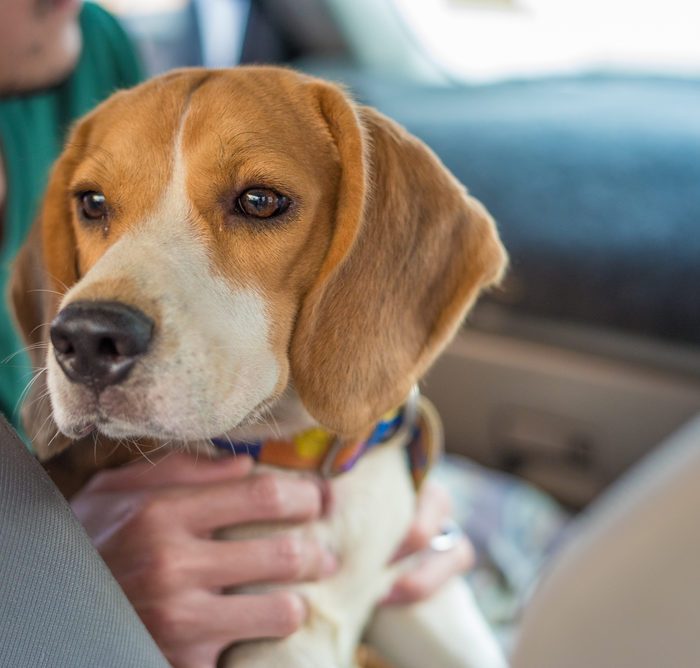 Benefits of Adopting a Shelter Dog 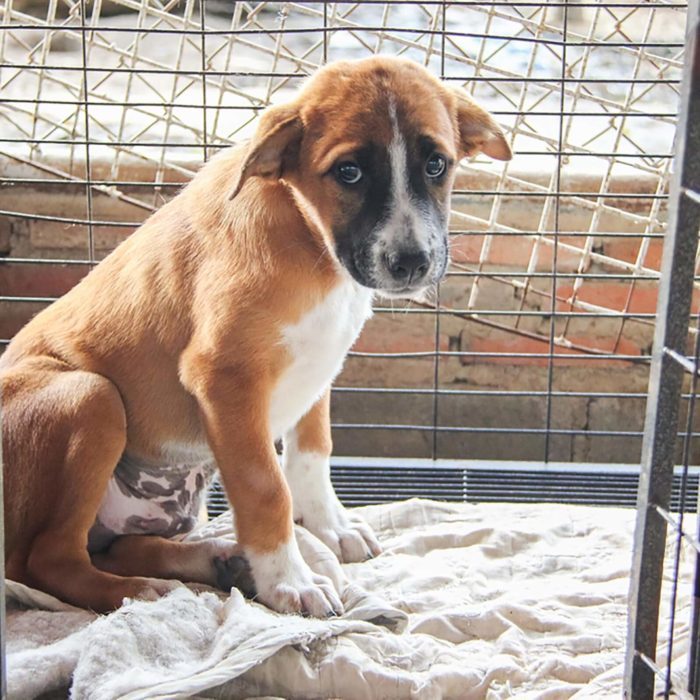 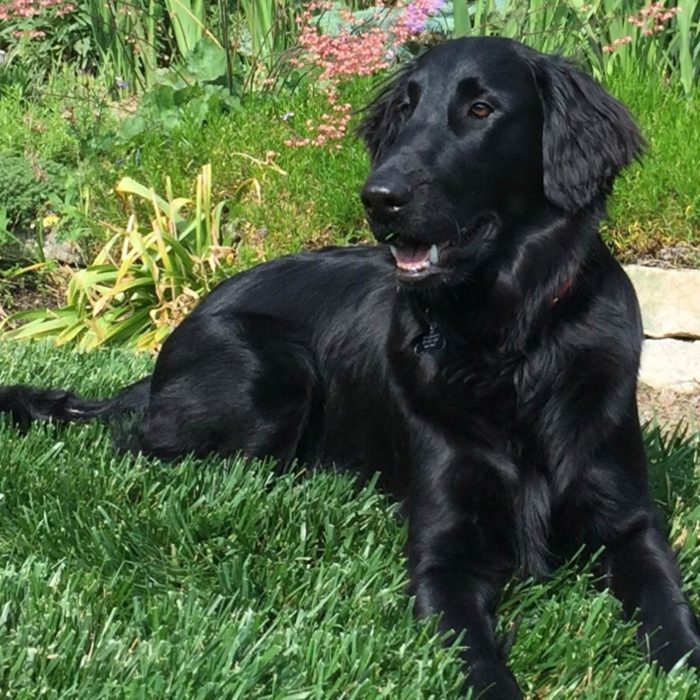