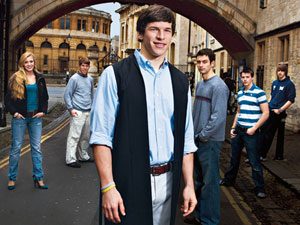 David Fajgenbaum remembers the exact date that his life imploded: July 17, 2003. It was a warm evening in Washington, D.C., and the 18-year-old freshman had just finished his first football practice at Georgetown University. “It was awesome,” the former quarterback recalls.

He called his parents in Raleigh, North Carolina, to let them know how well things were going. David’s dad, an orthopedic surgeon, was oddly subdued. Finally, in a soft voice, he said, “Son, your mom has brain cancer.”

“I went from being happier than I’d ever been to total shock,” says David. Rushing home, he announced he was dropping out of college to support his mother through her illness. But Anna Marie Fajgenbaum (pronounced “Fay-gen-baum”), just 52 years old and diagnosed with stage 4 glioblastoma, was adamant that her son return to Georgetown.

David threw himself into his studies and grew increasingly isolated. “I felt I was the only person on campus with a sick parent. When everyone’s sitting around laughing and talking, you don’t bring up your mother’s latest MRI or say you’ve been crying.”

One October evening when David was home visiting, Anna Marie woke up weeping. She was worried about David and his two sisters. “Mom, I’m going to be okay,” David assured her. Then, out of the blue, he said, “And I’m going to help other kids cope with loss.” A smile spread across his mother’s face. He decided on a support group called Ailing Mothers and Fathers—based on his mom’s initials, AMF.

When Anna Marie died later that month, David started hearing from friends who’d never even known his mom was sick. Some had gone through the same experience. “The mother of one of my best friends had also died of a brain tumor,” says David. “How did we not know that? Because we didn’t talk about it.”

He invited five students who’d lost relatives or friends to his D.C. apartment to talk. They decided to meet every other week, to share what they were going through and how they were coping. But they did more than talk. They also raised money: They participated in the Ironman 10K for cancer research, walked to battle ALS, and ran to defeat lung cancer.

David learned that nearly half of college students had lost a loved one within the previous two years. And every one of them has a story to tell. Julie George, who heads the Georgetown chapter, found out her dad had ALS during her freshman year. “I went to my first AMF meeting and felt like a huge weight had been lifted. It gave me a place to talk about the concerns for my family, the things that don’t come up over pizza in the common room or by a keg in someone’s backyard.”

David graduated from Georgetown last year and is studying public health at the University of Oxford. Now 23, he plans to become an oncologist and will attend medical school at the University of Pennsylvania in the fall. This is how one therapist’s advice helped her patient grieve.

The National Students of Ailing Mothers and Fathers Support Network (studentsofamf.org) has 2,000 participants on 23 campuses. “This organization,” says David, “is about one thing: being there for one another. And every time I see those initials—AMF—I see my mom, and I know I am honoring her by helping others. She would have liked that.”

27 Things You Should Do for Yourself During Self-Quarantine