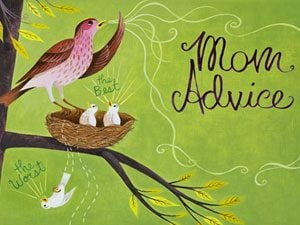 Jody Hewgill
The most valuable thing my mother ever told me was: “Who’s going to remember 100 years from now?” She said it a lot, often accompanied by a world-weary shake of the head. I was a bit of a perfectionist, not an easy child. So when I went overboard, my mother would throw me the lifeline of pulling back, getting a grip, gaining perspective.

It helps to bear in mind that even though it may not be the best of times, it’s not the worst; and that life goes on. A hundred years is my mother’s generous frame of reference; indeed, she is now nearly a hundred herself, with a long and very sharp memory. She has lived through the Great Depression, World War II, the invention of the atomic bomb, the arrival of men on the moon, and the addictive pleasures of the iPad. She has enjoyed her life by prioritizing the things she invests with mental energy: friendships, family, and good books. She lets go of the petty, the political, the imperfect.

My mother taught me that a century is a good cycle by which to measure the things that matter. By then, the village gossip has died down, whispers have been borne away on the wind, wounds have been healed by the passage of years. A quiet anonymity settles over the errors of our lives, and they fade, forgotten, into the panoply of human frailty and common humanity.

Patricia J. Williams is the author, most recently, of Open House: Of Family, Friends, Food, Piano Lessons and the Search for a Room of My Own.