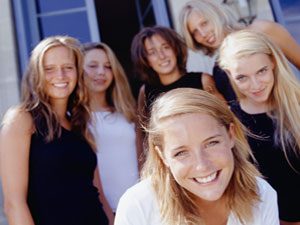 When I saw this recent New York Times story about a growing industry of college sorority rush consultants, I had to click. Another bogus trend piece, perhaps? No, it was real: The article describes consultants who charge anywhere from $125 an hour to $8,000 for a “weekend intensive.” That buys you one day “devoted to carrying yourself properly and the art of conversation” and another to your physical appearance, including help putting together specific outfits and with photos so the rushee can remember how to style herself later. The writer also describes women who spend all summer working out and trying to lose weight in anticipation of rush, along with a mom who says she lost 6 pounds from stress during her daughter’s rush week at the University of Texas.

It’s hard to read stuff like that and not smirk at least a little. My own rush days as a Delta Gamma at Northwestern University are more than a decade behind me, and while I’ll admit that going through the process was a little stressful, I couldn’t imagine hiring anyone to make it easier. Nor could I imagine my parents subsidizing such a demand. On the surface, this trend seems to epitomize every punch line about the superficiality of sororities. But there is something to be said for empowering young women with confidence and networking skills—one consultant compared her services to the same kind of coaching she does on Wall Street.

What do you think: Is image coaching for sorority rush a little (or a lot) absurd?