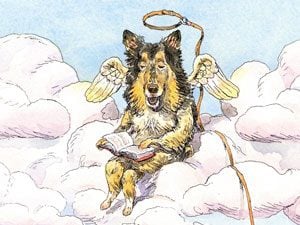 When I went into the memoir game, I knew I was working at a horrific disadvantage: As much as I would hate this getting around in literary circles in New York, the fact is that I had a happy childhood. At times, I’ve imagined how embarrassing this background would be if I found myself discussing childhoods with other memoirists late at night at some memoirist hangout.

After talking about their own upbringings for a while — the glue-sniffing and sporadically violent grandmother, for instance, or the family tapeworm — they look toward me. Their looks are not totally respectful. They are aware that I’ve admitted in print that I never heard my parents raise their voices to each other. They have reason to suspect that I was happy in high school. I try desperately to think of a dark secret in my upbringing. All I can think of is Chubby, the collie dog.

“Chubby, the collie?” they repeat.

We owned Chubby when I was two or three years old. He was sickly. One day Chubby disappeared. My parents told my sister, Sukey, and me that he had been given to some friends who lived on a farm, so that he could thrive in the healthy country air. Many years later — as I remember, I was home on vacation from college — Chubby’s name came up while my parents and Sukey and I were having dinner. I asked why we’d never gone to visit him on the farm. Sukey looked at me as if I had suddenly announced I was thinking about eating the mashed potatoes with my hands for a while, just for a change of pace.

“There wasn’t any farm,” she said. “That was just what they told us. Chubby had to be put to sleep.”

Somebody — my mother, I think — pointed out that Chubby would have been gone in any case since collies didn’t ordinarily live to the age of 18.

“Isn’t it sort of late for me to be finding this out?” I said.

“It’s not our fault if you’re slow on the uptake,” my father said.

I never found myself in a memoirist gathering that required me to tell the story of Chubby, but, as it happened, I did relate the story in a book. A week or so later, I got a phone call from Sukey.