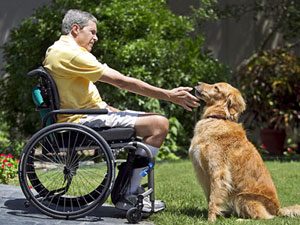 Ralph Barrera/Austin American-Statesman
As Paul Horton, a 59-year-old retired mechanical engineer, rolls his wheelchair around his Austin, Texas, home, his six-year-old golden retriever, Yogi, trails closely behind him. Yogi and Horton, who was paralyzed from the waist down two years ago in a cycling accident, have always been buddies, but now there is an unbreakable bond—all because of the day that Yogi ran away.

One October morning in 2010, Horton, an avid outdoorsman, climbed onto his mountain bike and took off through his neighborhood near Lake Travis. Yogi came along, as he had every morning for nearly three years, trotting happily beside his master. The two-mile route wound through hilly suburban roads to a narrow, forested trail. Shortly after turning around to go home, Horton approached a nine-inch-tall curb where the trail met the pavement. He had jumped the curb dozens of times before, but on this morning somehow didn’t get enough height, and the bike’s front wheel rammed the curb and twisted sharply. Horton, who wasn’t wearing a helmet, flew over the handlebars, slamming headfirst into the pavement. He was knocked unconscious. When he came to, he found himself lying crumpled on the ground near a cul-de-sac half a mile from home.

By Horton’s side was Yogi, anxious to continue the trip home. As Horton tried to rise, he realized he could not feel anything below his chest, and blood began to fill his mouth. Horton whispered “Go home. Go get Shearon.” Horton spoke the phrase slowly, again and again, words he knew the dog would understand. Go get was a familiar command. Shearon was the name of Horton’s wife. For about 45 minutes, Yogi refused to leave his companion’s side. Horton continued pleading, commanding Yogi to go. Finally, the dog bounded away.

That morning, Bruce and Maggie Tate, two of Horton’s neighbors, were on a walk in the area when they spotted Yogi running loose down the street, which they found strange. They had been sitters for Yogi and knew him as a calm and obedient dog. He darted toward them, then away, seeming to beg for their attention. When they followed, Yogi dashed off, leading them somewhere, it seemed.

The wait was agony for Horton. He lost track of time, and it became hard to breathe.

Then Horton heard the faint sound of a dog barking. Yogi bounded toward him, panting hard and nuzzling him. The Tates, who were right behind him, saw Horton’s condition and called for help. Horton was rushed to St. David’s Round Rock Medical Center, where surgeons did what they could to mend his damaged spine. Soon after, Horton was transferred to St. David’s Rehabilitation Hospital. His first two visitors? Shearon and Yogi.

Horton is still adjusting to his new circumstances, but he has regained some movement in his arms and hands and recently went scuba diving with a group of sports-minded paraplegics. Horton says that Yogi has grown even more devoted since the accident. Says Horton, “He’s my watchdog and my hero.”