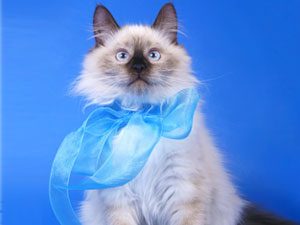 © iStockphoto/Thinkstock
We parents work so hard to relay the historical and spiritual import of religious holidays. No, we explain, Hanukkah is not primarily about gift giving; it’s about a long-ago freedom struggle. The eight-day winter holiday celebrates the successful resistance of the Jews against King Antiochus IV Epiphanes of Syria and the restoration of the Second Temple 21 centuries ago. All our traditions — from lighting the menorah to frying the potato pancakes called latkes to spinning a top in the game of dreidel — contribute to the commemoration of these events.

Unfortunately, the Hanukkah observance that has stayed with my children as the most significant of their childhoods has nothing to do with religious freedom. One night in the 1990s, we tidied up wrapping paper and toys in the den while the lit menorah stood on the kitchen table. In our absence, as the many-colored candles snapped and dripped, our long-haired black-and-white cat, Ladybug, hopped onto the kitchen table and brushed past them.

“Do you smell something?” asked my husband, Donny.

“Is something burning?” asked Molly, our oldest, age ten.

It was Ladybug! The fur on her left flank had been singed down to the skin. She wasn’t hurt, but she wore a peeved expression all evening, and for the rest of the week she hid whenever we began chanting the Hebrew blessings over the candles. Though her fur grew out as thick as ever, Ladybug took a dim view of Hanukkah after that, clearly preferring less flammable holidays, like Labor Day.

The following year, for a fifth-grade assignment about family traditions, Molly wrote about Ladybug’s encounter with the Hanukkah candles. The teacher, Lynn Fink, a sporty and funny woman, enjoyed Molly’s story and gave it an A.

Three years later, Seth got Ms. Fink for fifth grade. He also worked the scorching of cat fur into a writing assignment, and he, too, got an A.

Ditto our son Lee, three years later: same teacher, same story, same A. We had no idea these retellings were piling up.

The year Lily got Ms. Fink for fifth grade, she also felt inspired to pen an account of the night of a feline afire. By now, we were very fond of Ms. Fink. We invited her to join us for a night of Hanukkah. It was her first time to experience the Jewish holiday. Happily, she ate her latkes with sour cream and applesauce. Gamely, she spun the dreidel. Delightedly, she opened the small gift of homemade cookies the children had prepared for her. As the evening seemed to be winding down, she clapped her hands, rubbed them together as if before a banquet, and exclaimed, “So! When do we torch the cat?”

• Melissa Fay Greene’s new book, No Biking in the House Without a Helmet, is about her family of nine children: four by birth and five adopted at older ages from orphanages abroad. She is a two-time National Book Award finalist.

Meet the Newest Dog Breeds at the Westminster Dog Show

20 Things You Do That Your Cat Actually Hates