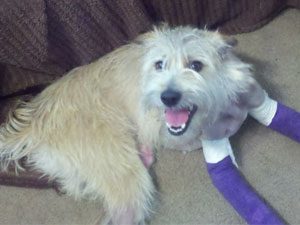 Courtesy Mason's family
Any dog’s love and loyalty can feel like a miracle. By that measure, Mason, a one-year-old terrier mix, may be the most miraculous dog on Earth.

The long-legged pup in North Smithfield, Alabama, rode out a tornado in his family’s garage last spring. His family thought he would be safe there, but the tornado blasted through the garage door and Mason disappeared.

Dozens of people perished that day from the twister. Mason’s family was grateful just to be alive, even if the storm had left their home uninhabitable. But they were heartbroken at the thought that their sweet, playful companion had died. They combed the neighborhood, hoping by chance to find him, but Mason didn’t turn up.

Three weeks after the disaster, Mason’s family stopped by the house to collect some belongings. There Mason sat on the front porch, so ecstatic to see his family that his entire body was wagging. They were overjoyed. Where had Mason landed during the windstorm? What did he eat for those long weeks? How did he find his way back home?

There was no answer to those questions and no time to ponder. Mason was terribly thin and couldn’t stand properly. The family quickly sought help and learned their beloved dog had crawled home on broken front legs. “He was literally on his elbows,” says Phil Doster, adoption rescue coordinator for the animal shelter that assessed Mason.

Doster had spent days reuniting pets with their owners and took an instant liking to the courageous terrier. He contacted Dr. William Lamb of Vulcan Park Animal Care in Birmingham, who volunteered to perform the needed surgery for free. Lamb inserted two metal plates and 17 screws in an operation that lasted more than three hours.

Mason’s injuries were so significant that he required weeks of recovery to heal. By the time he returned home to his family in September, he was bouncing around like a puppy again. “There were no ill effects whatsoever, which is a miracle in itself,” Doster says.

The clinic set up a Facebook page for Mason. It attracted fans all over the world, drawn to the story of a little dog’s triumph over a deadly force.