Can You Match the U.S. President with His Dog?

Pop quiz! It’s time to put your presidential (and pup) knowledge to the test. 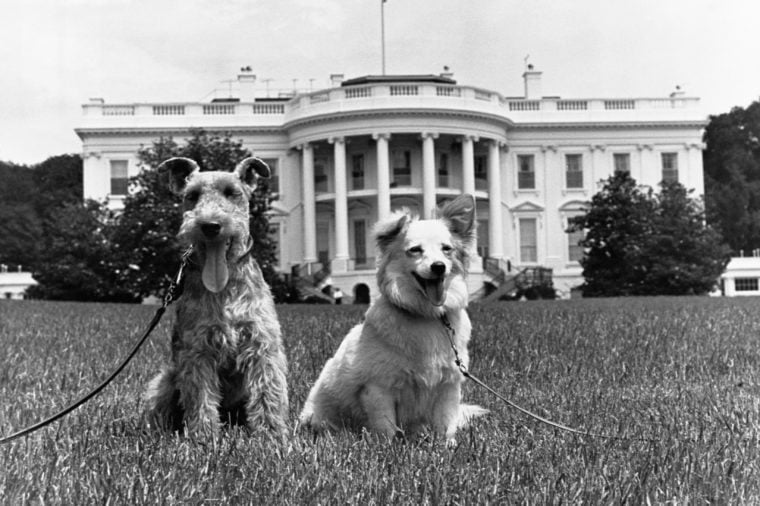 A long history of lucky dogs

We'll give you one hint right off the bat: None of the dogs featured here are matched to President Trump. He is the only president who hasn't welcomed a dog (or any pet) to live at the White House since President Harry Truman. If you can really even count Truman, that is. He was given an adorable Cocker Spaniel puppy by a woman from his home state of Missouri, but he didn't want it and eventually gave "Feller" away. According to Steve Coren, author of Why We Love Dogs The Way We Do, Truman told the press, "I didn't ask for him, and I don't need him." But hey, we don't want to start this quiz on a sour note. Let's have some fun and see if you can match these adorable White House dogs to their presidential parents. And once you've tallied your results, try answering these U.S. presidential trivia questions everyone gets wrong. 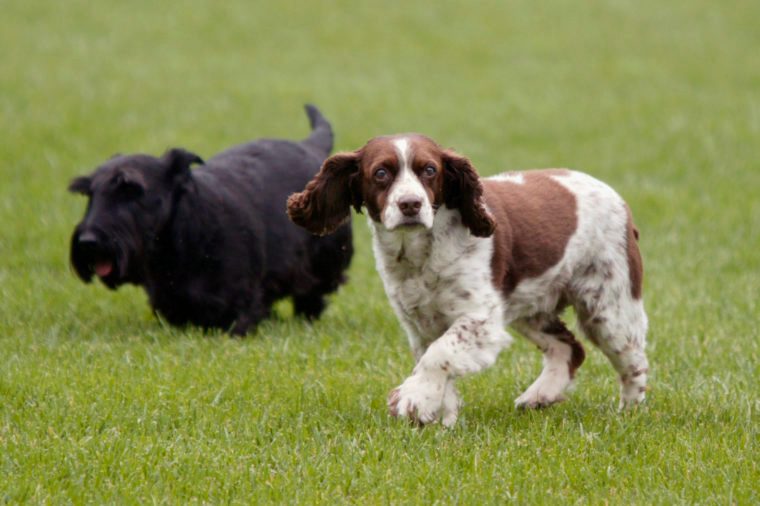 This English Springer Spaniel was born at the White House on St. Patrick's Day, but that wouldn't be her home...not for another 12 years. Her mom, Millie, was also a resident of the White House, but she lived with a different president. Springer Spaniels are known for their bird-hunting skills, which Spot practiced on the White House grounds. When she wasn't chasing birds, she was often in the Oval Office during briefings and other important meetings, and the president once quipped, "Spot understands the decorum of the Oval Office, so she gets to go in." This pup also loved to fly, and she regularly accompanied her president on Air Force One to Camp David and to the family ranch in Texas for vacation. 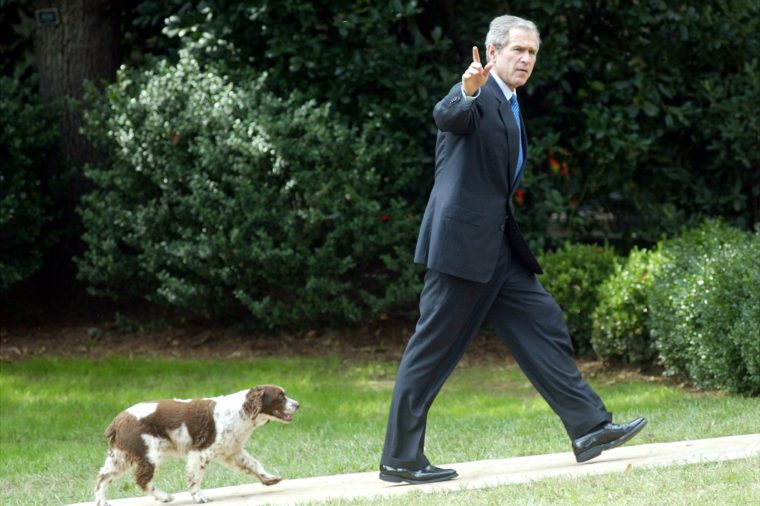 If you guessed Dubya, you guessed correctly! Spot's full name, according to the Presidential Pet Museum, was Spot Fetcher, "a nod to Texas Rangers shortstop Scott Fletcher, who played for the Rangers when Bush owned the team." Of course, Spot isn't the most creative dog name out there, and President Bush once joked, "People often ask me how I came up with that name. I don't know; I'm just a creative kind of guy."

Of course, it wasn't all belly rubs and presidential treats when Spot was at the White House. During Bush's first term, the nation faced a monumental crisis: the 9/11 terrorist attacks. Domestic security and the threat of terrorism became the chief focus of the administration, which declared a global "war on terrorism." Here are 12 facts about the White House you missed in history class. 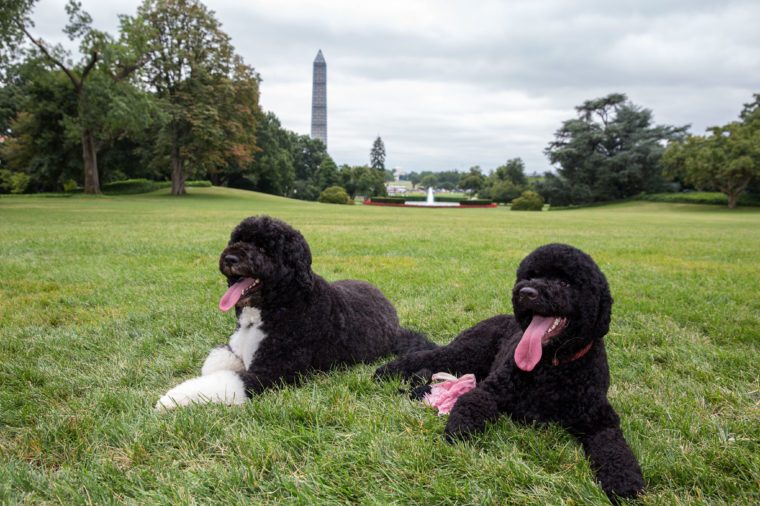 This president kept a promise he made to his daughters that win or lose, once the election was over, they would get a dog. He won the election, and the new First Family welcomed Bo, a male Portuguese Water Dog to the White House. He witnessed his president be named Time's Person of the Year (twice) and receive the Nobel Peace Prize. (And no, he didn't eat his dad's birth certificate.) Sunny, a female Portuguese Water Dog, joined the family four years later. 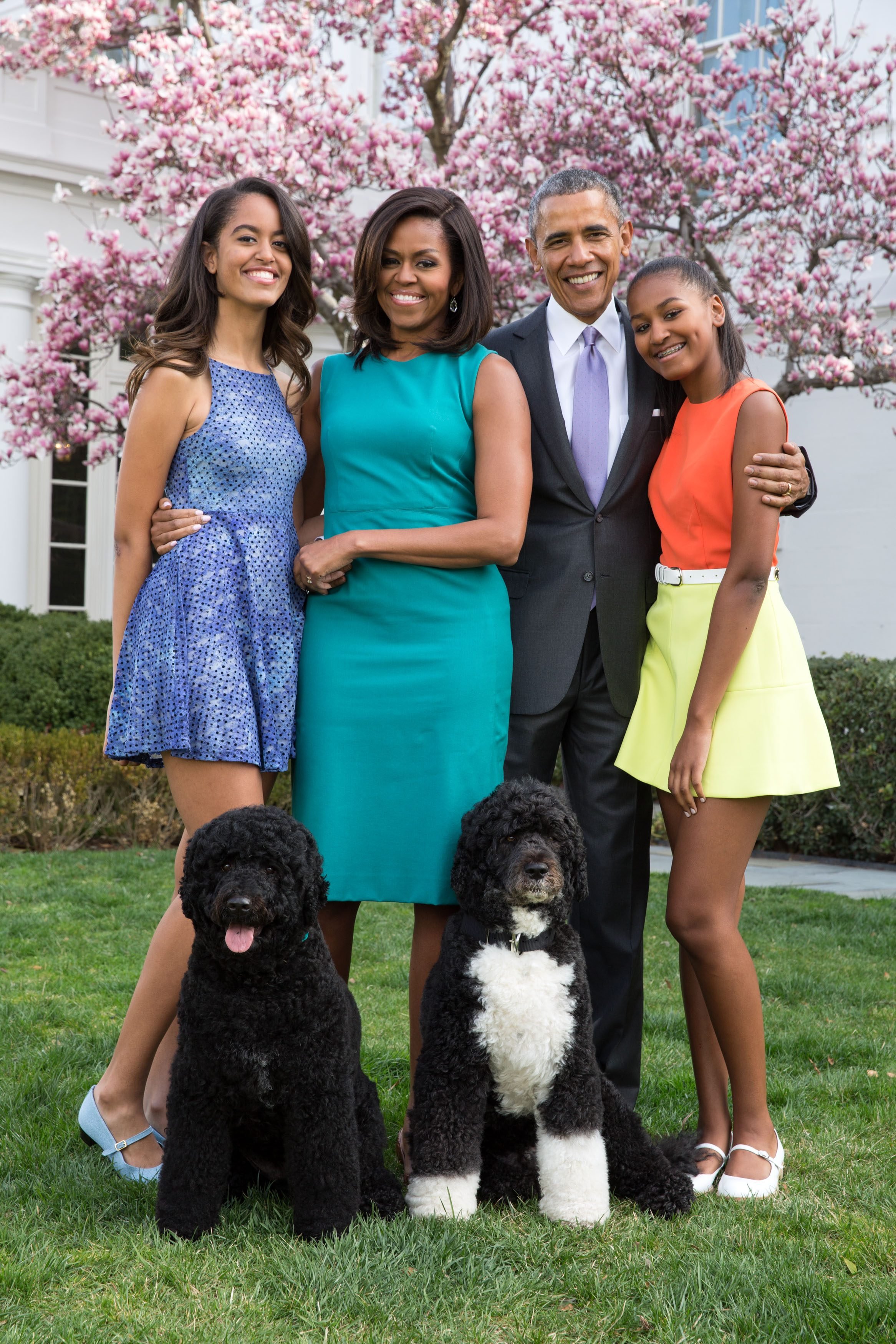 This one should have been easy since this dynamic duo called the White House their home not all that long ago. Bo and Sunny were hugely popular during President Obama's tenure. In fact, First Lady Michelle Obama told PBS that she received so many requests for pictures and appearances of them, she got a monthly memo to approve them all. We're glad that pet appearances don't make the list of things presidents aren't allowed to do while in office. 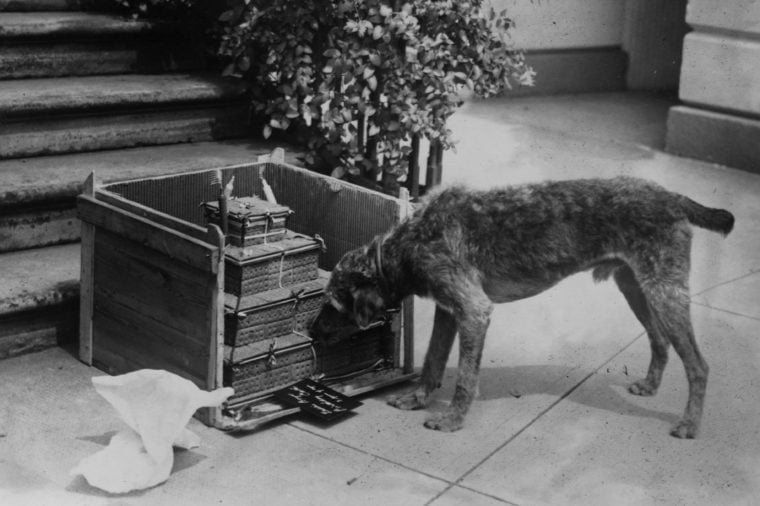 This president won the election by the greatest popular vote margin of the time, but he didn't accomplish much in his presidency. Yet Laddie Boy, an Airdale Terrier, was a media darling. Laddie Boy was 6 months old when he arrived at the White House, a day after the inauguration. Almost daily, the Washington Star and the New York Times featured Laddie Boy, a good distraction from the scandals that marred his pet parent's administration. 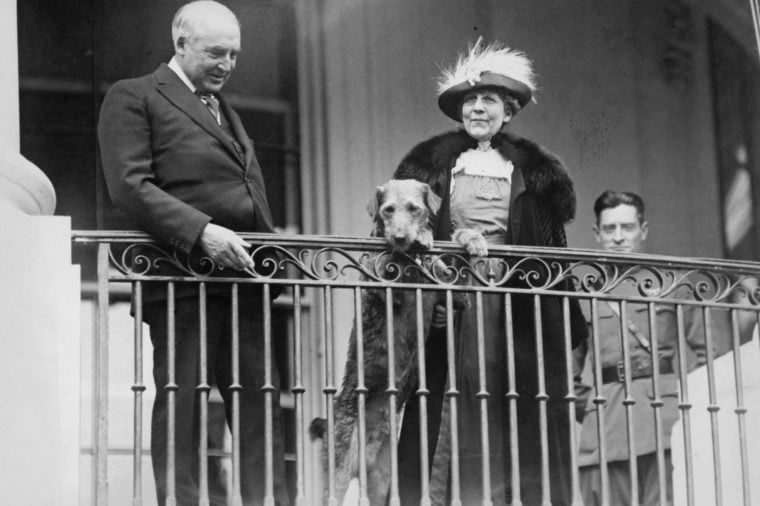 If Instagram were around back in the 1920s, Laddie Boy—and President Harding—would've been splashed all over it. As it was, according to Smithsonian Magazine, he was "the White House's first celebrity dog." One Smithsonian Institute historian explained, "That dog got a huge amount of attention in the press. There have been famous dogs since, but never anything like this." It was hard for Laddie Boy not to photobomb President Harding and his wife, Florence because they took him everywhere—the golf course, cabinet meetings, and fundraising events.

Unfortunately, Laddie Boy's popularity only went so far. Harding appointed a mix of prominent leaders and shady politicians, and what followed was a series of scandals and corruption that cast a dark shadow over his third year in office. Harding eventually went to Alaska in 1923 to escape the conflicts in Washington but died before he returned to the White House. Check out these surprising legacies left behind by U.S. presidents. 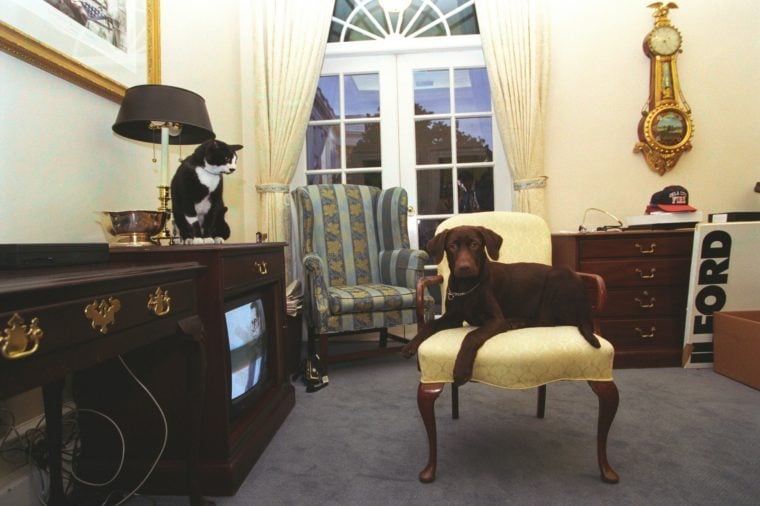 Buddy, a chocolate Labrador Retriever, was a gift to this president during his second term. He loved the spotlight but didn't want to share it with his cat sibling, Socks, whom he often pestered. Thankfully, things were more peaceful outside the animal kingdom at the White House (for a while, anyway). In fact, while Buddy resided in D.C, the United States enjoyed more peace and economic well-being than at any other time in its history, courtesy of this president. Buddy was no stranger to the Oval Office, and he also often took walks with his president on the White House grounds and traveled to Camp David with him. 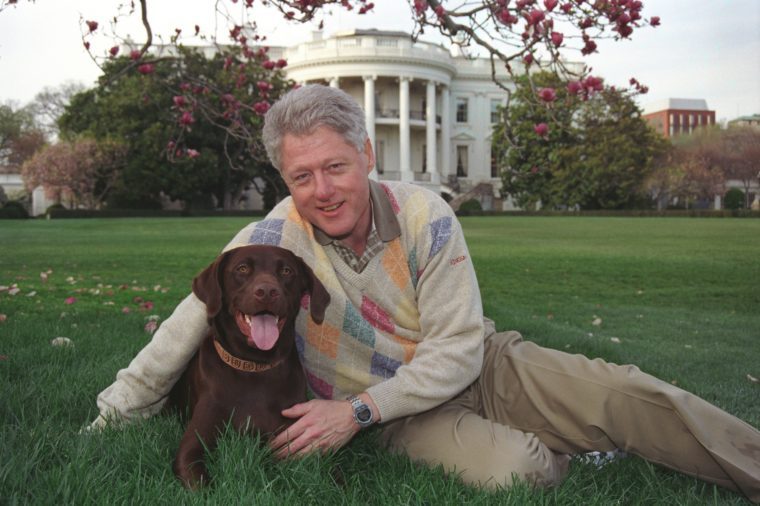 Did you get this one right? Buddy was President Clinton's beloved pet. According to WhiteHouse.gov, while the two of them were in office, the country experienced the lowest unemployment rate in modern times, the lowest inflation in 30 years, the highest homeownership in the country's history, dropping crime rates in many places, and reduced welfare rolls. Clinton proposed the first balanced budget in decades and achieved a budget surplus. No matter how well the country is doing during a president's tenure, it's stressful to be a world leader, whether or not you've got a furry BFF. Take a look at these dramatic before-and-after photos of how presidents have aged in office. 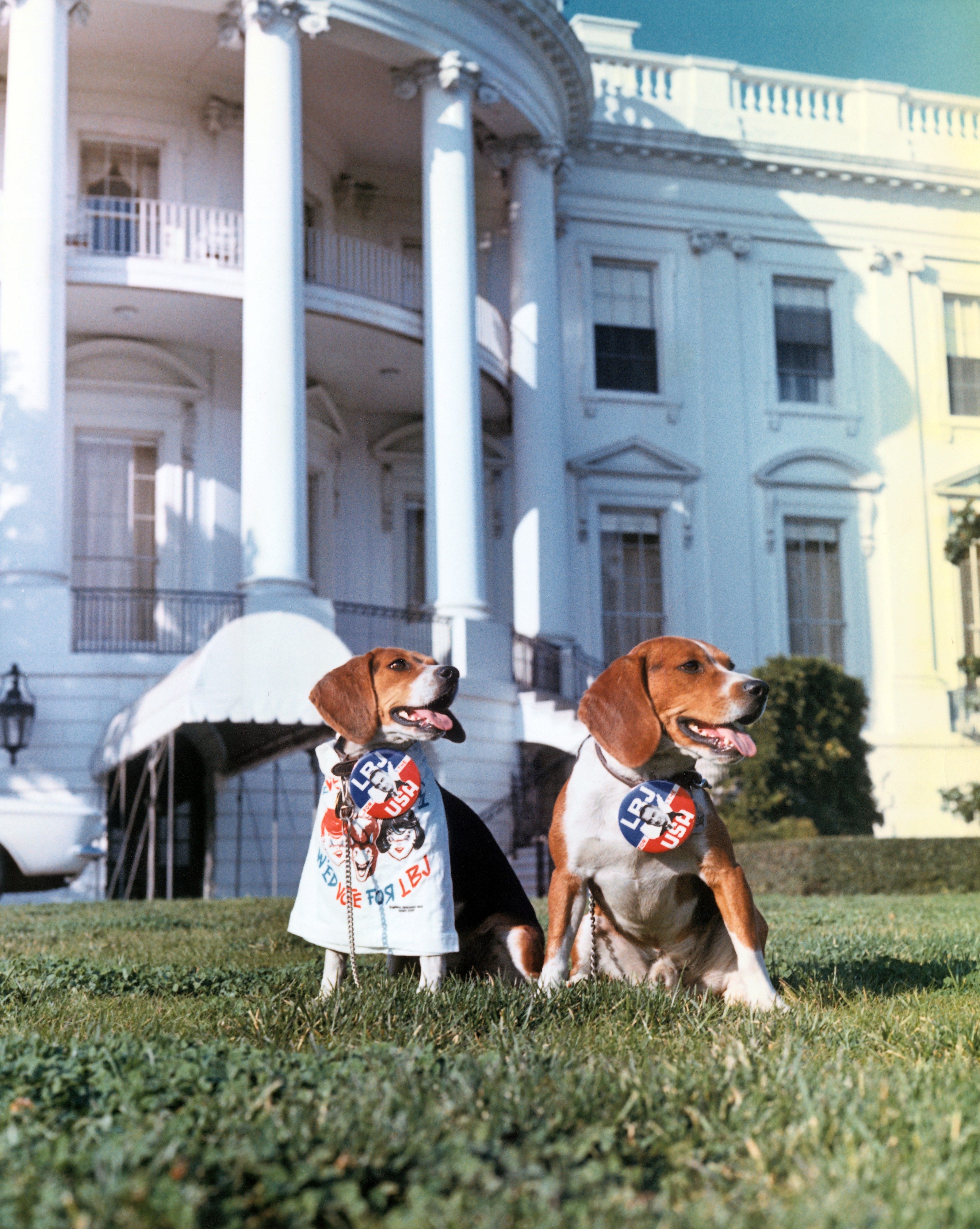 These two Beagles didn't end up in the White House after an election but after a national tragedy. They arrived shortly after the inauguration, during the first cabinet meeting. Their pet parent often invited the press to go on walks with Him and Her on the grounds at the White House. They also rode along in the president's car, watched astronauts orbit the moon, swam in the White House pool, and attended a formal tea party, where Him peed on a chair. Maybe he was protesting the bacon-free scones!