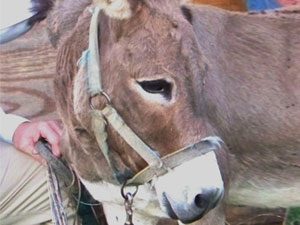 Courtesy Jake Dunlow
Everyone in tiny Askewville, N.C., knew Molly the donkey from her years of starring in a local church’s live outdoor nativity scene. “She was so laid back and sweet, she was like an old lap cat,” says Skip Dunlow, whose dad, Jake, owns Molly.

But it looked like Molly might have seen her last Christmas after a tornado in April leveled many structures in town, including her stable. There was a report of the donkey flying through the air during the storm. Rescuers didn’t have time to look for her until the next day. They found her in a ditch on her back, all four legs waving in the air. Skip’s heart sank: The tornado had either carried or rolled her, and surely the donkey suffered too many broken bones to last much longer.

He underestimated his family pet. No only did Molly recover, local Humane Society officials were so cheered they offered to re-build her stable, dubbing it Molly’s Mansion. Molly is even more of a star now as the donkey who wouldn’t give up on life. “It didn’t feel like a miracle,” says Jake. “It was a miracle.”

What Does Catnip Do to Cats?