The “Kim Kardashian of Cats” started life out in a shelter, just waiting to be loved. Today that dream has surely come true, as Nala has over 4 million followers on Instagram, a feat which earned her the title “Guinness World Records Most Popular Cat on Instagram.” Since finding her forever family with moms Varisiri Pookie Methachittiphan and Shannon Ellis, she’s built an empire to include her own cat food line. Nala was recently named the “most popular cat on IG” by Business Insider and is currently nominated for a People’s Choice Award.

In 2010, Methachittiphan was a student living in Los Angeles. From time to time, she would visit shelters in her neighborhood without any plans to adopt. She just liked being around the animals. In fact, she recently told Reader’s Digest that the day she met Nala, she’d been visiting a high kill shelter in L.A. purely to spend time with some of the cats—that’s something these 50 shelter dogs that need homes before 2020 would probably enjoy as well.

“I had no intention to adopt a cat that day,” Methachittiphan says. But when she saw Nala in her metal cage, “We made eye contact and I couldn’t resist her big blue eyes.”

At that point, she was done for. “Nala was so small. I asked the shelter if I could hold her. Once I had Nala in my arms, Nala looked up at me and licked my face.” And that was when she knew she had to take this kitty home. “It was meant to be.”

Still, Methachittiphan never imagined Nala would become an Insta-star. “I started Nala’s Instagram account in 2012 as a way to share photos with my close friends and family in Thailand,” she explained. The possibility of Nala gaining attention beyond that small group of people hadn’t occurred to her…until it happened.

A star is born

“I had no idea that people would enjoy photos of Nala so much until her photo landed on Instagram’s popular page,” Methachittiphan says. “Each time Nala’s photo was featured on Instagram’s popular page, her account would gain 1,000 new followers. I was overwhelmed with the response and began to realize she had something special here!” That’s something the owners of the pets featured in these ridiculously adorable animal Instagram accounts can relate to.

The rise of an influencer

From there, Nala’s popularity snowballed. “When Nala’s fans started to reach out and inquire about merchandise, we began to realize just how popular Nala was becoming.” But that was just the beginning. Next, large nationwide brands messaged Methachittiphan about hiring Nala to do sponsored ads. “This took us by surprise because Nala’s account grew organically.” They couldn’t believe that a big brand wanted to pay them to take photos with their products next to Nala. “That was the beginning of Nala’s influencer journey.”

Since adopting Nala, the family has only grown. “We have a house full of adopted and influential furry babies!” Methachittiphan says. Nala’s brothers and sisters include five other kitties and one pup, all of whom have their own social media followings to brag about. This man who only adopts “unadoptable” animals has a similar tale to tell.

Stella was the first kitty Ellis adopted, and she was originally meant for her nieces. “Stella was owner surrendered to a rescue when she was two years old and now she’s 13 years young!” Methachittiphan says. Together with her brother Steve, she has over a hundred thousand Instagram followers. And it’s no wonder with that sweet face!

Ellis later adopted Steve as a companion for Stella. “Steve was found behind a dumpster and dropped off at an animal hospital when he was four months old,” Methachittiphan said. “The animal hospital called to see if we could foster him, which we did and later adopted him. Today, Steve is nine years young and still handsome!”

Spencer was adopted from the Hawaiian Humane Society when Ellis was there for visit. “She took Spencer for a walk and he stole her heart,” Methachittiphan says. “Today Spencer is our only pup and he loves his kitty siblings very much.” He also likes to dress up as a taco and show off for his 80,000 Insta fans. And if you like his photos, you’ll definitely want to check out these adorably funny cat and dog photos.

“Coffee is our five-year-old cancer survivor that has been an inspiration to us all!” Methachittiphan says. “Coffee’s first owner couldn’t take care of him and asked my sister, Ping, to adopt him. It was hard to resist his bright blue eyes, round face and gentle personality.” Like Nala, Coffee has an engaged following on Instagram, with 2 million fans and counting.

“We found Luna listed on Craigslist and we knew that she needed to be part of our family,” Methachittiphan recalls. Also affectionately nicknamed “Baby Loon,” Luna’s original owner lived in New York. But because of Luna’s mild orthopedic issues, they felt it was best for her to be rehomed with a family who could meet all her needs. “Today Luna is three years old and a very hungry kitty.”

“Apollo is our newest addition and the baby of our family,” Methachittiphan explained. “Apollo was rescued from a high kill shelter last November and we fostered him back to health.” Once he was ready to be adopted, the family realized they weren’t ready to say goodbye. “Our connection and bond was too strong to see him leave our family.”

In addition to managing her Insta fame and keeping up with her siblings, Nala is also quite the entrepreneur. After years of working with, and being asked to test, various cat food brands, she decided to start one of her own. “It seemed like a natural next step to take our combined experience and passion to develop a company called Love, Nala with pet wellness and giving at its core,” Nala’s moms said. “Love, Nala is more than just a cat food line. Love, Nala is our chance to share the love we have been blessed with to help create a better life for other animals, so they can thrive and bring joy to the world like Nala has.”

But Nala also works tirelessly to promote several causes near and dear to her feline heart. “Pet adoption & rescue are very important to our family,” Nala’s moms said. That’s why they started the #ShowtheBow campaign to encourage people to adopt and not shop for pets. “People can upload a photo of their pet wearing a real or GIF bowtie and use the #hashtag #ShowtheBow to show your support and raise awareness about the importance of pet adoption.”

Nala is also passionate about decreasing overpopulation, which is why she promotes spaying and neutering. “Considering that more than 2,000 healthy animals are euthanized every day across the United States alone, the goal is to end euthanasia due to lack of resources and overcrowded shelters.”

Next, read on for 21 before and after cat adoption photos that will melt your heart. 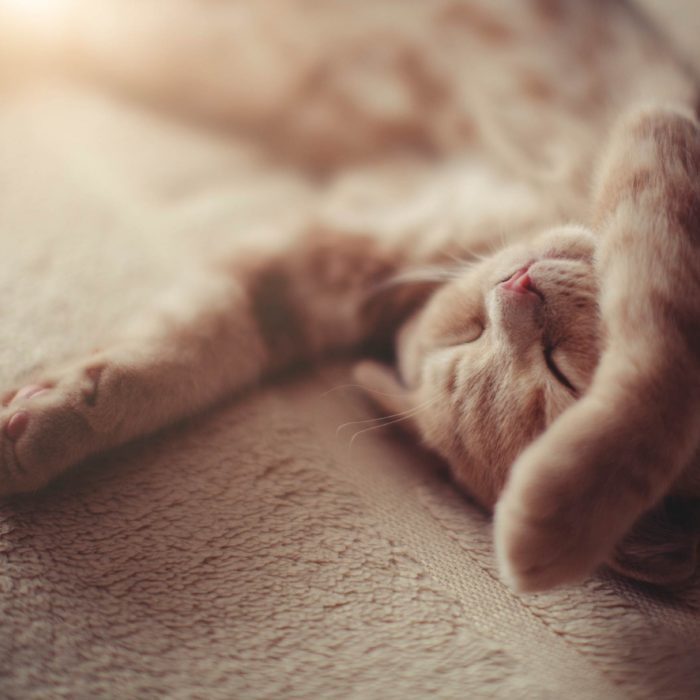 Things You Never Knew About Your Cat 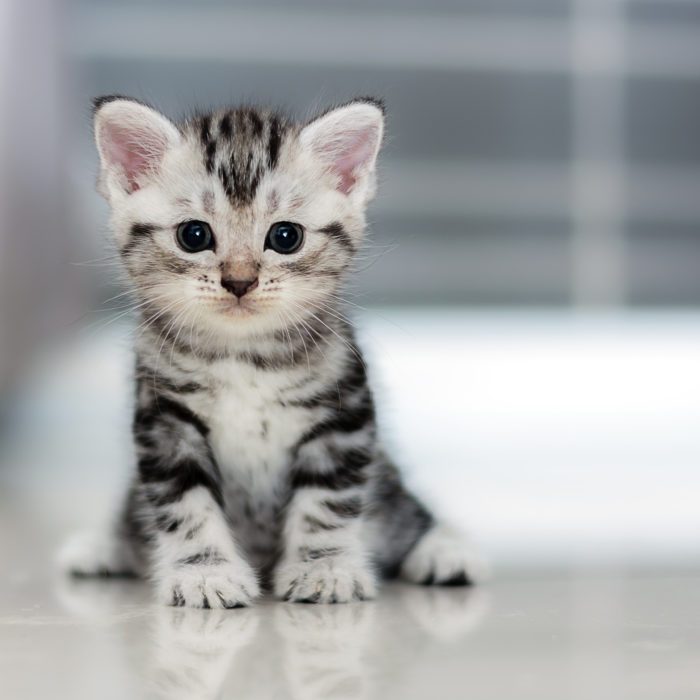 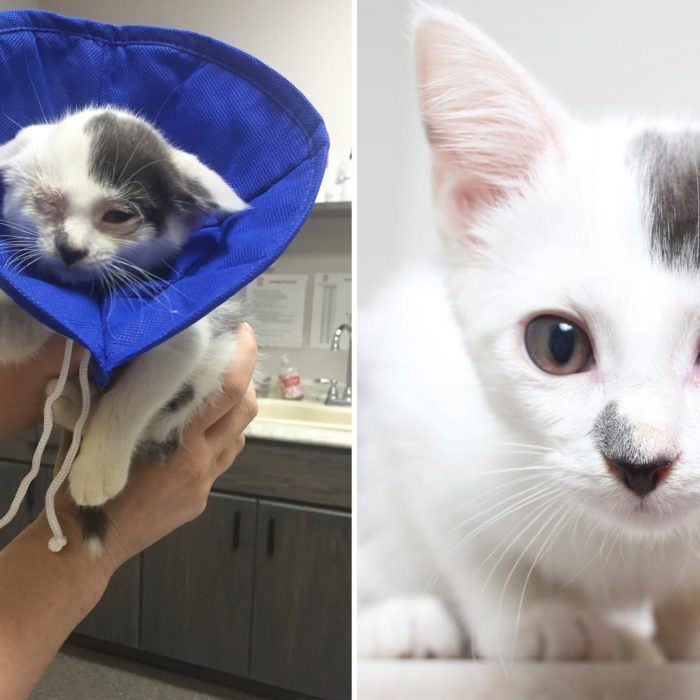 Cat Adoption Photos That Will Melt Your Heart