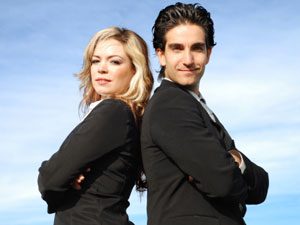 © Hemera/Thinkstock
According to Paula Szuchman and Jenny Anderson, authors of Spousonomics: Using Economics to Master Love, Marriage and Dirty Dishes, “Economics is the surest way to marital bliss,” whether that means figuring out the best division of labor or allocating your resources—time, money, energy—most efficiently. Here are a few ways in which marriages resemble businesses, and how you can use the concepts of the corporate world to fix what’s not working in your relationship.

Market failure. A marriage is like a market, with the two partners exchanging goods and services (often it’s the working spouse who provides the former and the stay-at-home spouse who provides the latter). But when one resentful partner doesn’t feel his or her contribution is being valued fairly, the market fails. Solution:  Target those things that you both agree are being undervalued and trade them for something you think it’s worth. For instance, if you think no one appreciates the ten loads of laundry you do a week, ask your spouse if he would come home early every Thursday and let you have a night out with the girls. He swaps one night at the office for his clean laundry—and your sanity.

Perverse incentives. In the business world a “perverse incentive” is one that encourages a worker to do the opposite of what he should. For example, Medicaid reimburses doctors more for diagnostic tests than for time spent with patients. Hence, doctors don’t spend much time with patients. In a marriage, a perverse incentive could be when one partner refuses to acknowledge problems because it’s easier to just tune them out and pretend everything is fine. Working seven days a week means we’ll have more money to enjoy ourselves, right? Solution: Switch perverse incentives for smart ones. Going into the office five days and spending Saturdays with your spouse might mean you’ll have to focus more at work, but it will make everyone happier at home.

Inequity aversion. Economists say that in a market economy, people inevitably face trade-offs between equity—what’s fair—and efficiency—the optimum allocation of resources. Those who obsess over the fairness part of the equation often end up losing out. Same thing in a marriage. Stewing over that one dirty dish partner left in the sink is going to irk both of you. Washing it yourself may not be fair, but you’ll probably forget doing it sooner than that blowout fight your nagging will inevitably lead to.

This Is Why January Is the Biggest Month for Divorce