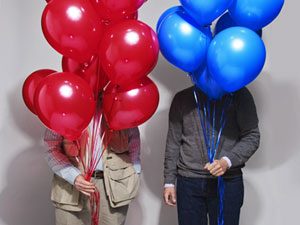 Photograph by Erin Patrice O'Brien
Things were going great. On the last night of our family reunion two years ago, my 62-year-old father and I walked along a beach in South Carolina, glasses of wine in our hands, and soaked in the warm air, the full moon, and the gravity of the years. I’m my dad’s first child and only son, now married with three kids, a career, and a mortgage. From the surf, we could both see his grandchildren silhouetted in the glowing windows of the rented beach house. The moment for a toast had arrived.

And that’s when my dad started talking about the Tea Party.

Somewhere along the way, my dad had come to believe that trying to sell me on his conservative politics was the equivalent of bonding. His opining, however, has always had the same effect on me: My jaw clenches, my back stiffens, and the charge of political discord transforms the most beautiful moon on the East Coast into a naked lightbulb hanging in an interrogation room. Suddenly, I’m trapped with a right-wing pundit who happens to be my dad.

Ever since George W. Bush beat Al Gore in 2000, the chronic red-blue conflict in America hasn’t just been a spectacle on cable news; it’s invaded our family’s phone calls, vacations, e-mails, text messages, Facebook posts. It nearly destroyed my relationship with my own father.

Our father-son differences date back to high school, when my dad, an officer in the U.S. Coast Guard, personally wrote the essay for my application to a military academy, which I passionately opposed with a declaration that I was a “nonconformist” meant for unconventional pursuits (i.e., tramping around like Jack Kerouac). But the arguments we’d had about politics in recent years had been of a different intensity altogether.

During phone calls and visits home, the day’s news headlines were like a background hum growing louder and louder, overwhelming us. It would start innocently enough: My dad would coyly ask what I thought of, say, the latest skirmish over gay marriage. “It’s certainly a complicated issue,” I’d say, as if trying to tiptoe past a sleeping dragon.

Inside, however, I was roiling, considering some close friends who were gay and in committed relationships. Unable to resist, I’d throw out a line to bait him: Hey, isn’t tolerance an option?
“I’m not a live-and-let-live guy,” my dad would assert gruffly, now freed to unleash his own opinions. “I’m live-and-let-live within a certain set of moral values!”

Global warming, immigration, Iraq, Nancy Pelosi—it didn’t matter the subject: Before long, we were both on our soapboxes, red-faced and yelling. Hang ups were frequent. During weekend get-togethers, the simple act of rustling a newspaper to the op-ed page or clicking my tongue at Fox News was enough to send my dad skulking out of the room like a wounded animal. I’d sit on the couch, depressed and confused. My beleaguered mom was left to mediate, trying to cool everybody down so we could at least have dinner together. 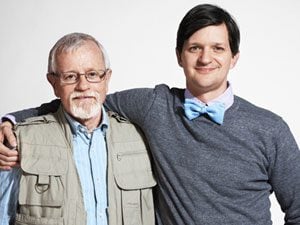 Photograph by Erin Patrice O'Brien
In 2004, I had the bright idea of writing a book about the divisions between my father and me, how they related to the larger national political dialogue. I typed up a sample chapter for publishers, full of scenes from our lives. I made some oblique references about the book to my father, but he somehow came to believe that I was writing an homage to him in the spirit of the late Tim Russert’s Big Russ and Me. Far from it: I was painting him as a modern-day Archie Bunker, spewing harsh opinions from his recliner.

Not long after, while babysitting my nephew, Dad found a copy of my proposal on my sister’s computer while checking his e-mail. My sister called me the next day, apologizing profusely for having left it open on her desktop but also warning me that things were about to blow up.

I didn’t hear from Dad for several days, and every hour that passed became freighted with more dread. For a couple of days, I thought we’d never speak again. When we finally did, it was a tense, emotional conversation. His voice was shaking. How could you think these things about me? You think I’m some kind of bigot? An ignorant redneck? I apologized profusely, nearly in tears.

Given the emotional opera of the election that year, the consequences of our differences felt more significant than ever. It pained me to hear him say that he thought the war in Iraq was justified, for instance, or that women didn’t have the right to choose. In my insular New York world, friends whose parents shared their liberal political views talked about my father the Republican like he had an unfortunate medical condition.

Something had to change in our relationship. I decided it was me.

I forced myself to pay closer attention to my father’s life. While he was occasionally bellicose in his rhetoric, in everyday life, he was a different person. Actually, he was probably the most open and tolerant person I knew, my supposedly tolerant friends included. He had a warm, southern hello for total strangers in my Brooklyn neighborhood, socialized with liberal retirees in his own North Carolina neighborhood, had a gay photographer friend in town with whom he traded camera tips, and spent every Wednesday delivering food to the housebound. It reminded me of the old adage: Liberals love humanity but dislike people; conservatives dislike humanity but love people.

Over time, my dad’s tolerance went from a confounding outlier (he’s a Republican, and he likes people!) to a more complex reality—and a personal challenge to my own biases. My dad forgave me for the things I wrote in the book proposal (the book was never published). It was a quiet and, to my mind, major act of love. If I couldn’t look past my own politics and extend a hand to my father now, who was less tolerant, he or I? And how important to the future of the United States of America was my winning an argument over taxes and deficits with my dad anyway? It was the man I wanted to have a relationship with, not his political agenda.

Bridging the divide required time and patience from both of us. We slowly began to migrate our conversations to new subjects, carefully finding topics that didn’t naturally lead us down the warpath: his interest in photography, the successes and trials of my sisters, home repair, raising children. It was awkward at first, but after a while, I began to look forward to talking about real estate values or the price of heating fuel. And when politics did crop up, as time went by, I noticed we both came to agree on something: that polarization, so corrosive to our own relationship, was corroding every­thing else as well. “I can’t stand to watch the constant partisan bickering anymore,” he told me recently.

So when that night on a South Carolina beach was threatened with a sudden squall of Rush Limbaugh, I took a deep breath and decided only to listen, not to fight. It’s not that I agreed with him. But I knew what was in his heart, and it wasn’t the Tea Party. Mid-sentence, my dad caught himself too. He took a deep breath, sighed. We both just listened to the surf, falling into a temporary spell. When we came to, we were standing in this glorious place, that moon overhead, the whole country at our backs. A father, a son, a real family—a better union.

Joe Hagan is a contributing editor for New York and Rolling Stone. He lives with
his family in Tivoli, New York.

How to Complete a Renovation Without Getting a Divorce