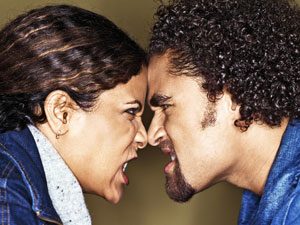 Jon Feingersh/Getty Images
You fight. You don’t want to, but you do. You fight because of things she does that you don’t like and things you do that she doesn’t like. The things themselves are not important; what’s important is that you both always do them. You may say you are fighting about her habits, and she may say she is fighting about yours — that you are fighting over the nearly daily discovery that habits are inextinguishable. But really, you are fighting because you are married, and fighting is as intrinsic to marriage as sex.

Fights are not just arguments that don’t end. They are arguments that enter a dimension different from the one in which they started. They’re volatile, often imaginative, and always terribly personal. They are, in other words, what sex should be.

People know a lot more about your fighting than you think they do. Your children are especially unfooled, for though you don’t have sex in front of them, you fight in front of them, or at least within their earshot, and your fights will forever serve as their introduction to the complexities of adulthood. You think that some fights are trivial because they are over trivial matters. Your children understand that there are no trivial fights, because each fight has the potential to grow into the kind of fight that ends your marriage.

But how do you do that? Well, you don’t go to sleep angry, as the old saying goes. And you don’t say what can’t be unsaid. And you don’t fight drunk. And you never end a fight by having sex with someone else instead of each other. Infidelity is the final measure of victory and defeat.

How to Complete a Renovation Without Getting a Divorce