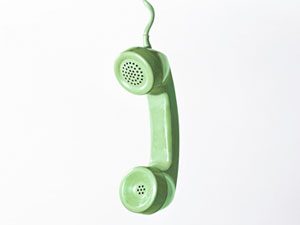 Last fall, in the days following Hurricane Sandy, hundreds of New Yorkers lined up not for tickets to a hot Broadway show but for their turn to use a pay phone. The storm had knocked out 25 percent of the cell phone towers from New Hampshire to North Carolina, leaving millions of people without cell service and forcing them into the streets to search for the no-longer-ubiquitous telephone booth.

Even with this almost quaint resurgence, landlines have been mostly turned into vintage holdovers by the rise of the mobile phone. By 2006, about 10 percent of households had ditched their landlines completely, and between 2008 and 2011, the number of wireless-only households nearly doubled. Even pay phones in major cities and elsewhere fell into disrepair. “Landlines in homes began to collect dust and serve an increasingly decorative function,” writes New York Times reporter Andrew Keh.

Still, telephones have proved themselves useful ports in a storm for decades. Because they rely on underground copper wire rather than electricity and radio waves, they’re usually dependable when other forms of communication break down. There are other reasons, too, to keep your landline, say experts. For instance, when you dial 9-1-1 from a cell phone, operators will not be able to immediately identify your location, as they can from a telephone. And some home-security companies depend on a landline­ to trigger the alarm from their automated system, which connects you to a dispatcher.

Most rural households have traditional phones because cell phone towers are few and far between. “Wireless service can be spotty and expensive. Landlines are lifelines for rural communities,” says Coralette Hannon, a senior legislative staffer at AARP.

Then there are the important everyday concerns that keep people plugged in. “Our cell numbers have changed several times in the past few years, but our home phone has stayed the same,” writes Laura Grace Weldon on wired.com’s GeekMom blog. “It’s the line our elderly relatives use, the line we list on documents, and yes, the line we rely on when disasters knock out wireless networks.”

Why More People Are Going to Portugal to Retire