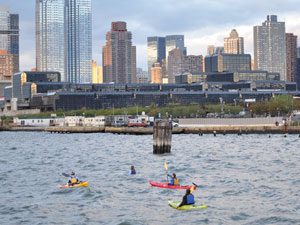 If you’re visiting New York City or Houston, TX., get off the beaten track and check out these unusual ways to tour these two great American cities.

Although it’s easy to forget, Manhattan is an island. So what better way to experience the Big Apple than by taking to the water and sightseeing via kayak? Head to the Manhattan Kayak Company on Manhattan’s West Side and sign up for its Sunset Tour, the most enthralling of the company’s 30 trips ($65 per person).

You’ll start with 30 minutes of practice on land before taking to the waters of the Hudson River in a canary-yellow kayak. The sunset route takes you south along the riverbank, past Battery Park and the towering skyline of lower Manhattan. Then, as the sun begins its slide into the water, you’ll get an unforgettable view of New York’s steel and glass illuminated by a whiskey-golden glow.

When people think of Houston, they tend to think of cowboys, steak, and the Astrodome. Or, perhaps, “Houston, we’ve got a problem.” They do not typically think, “quirky art scene.”

Yet Houston, the fourth largest city in the U.S., has an art scene as offbeat as they come. Take the Beer Can House, at 222 Malone Street. In 1968, John Milkovisch, a retired upholsterer for the Southern Pacific Railroad, began to cover his house in aluminum siding. But instead of traditional siding, Milkovisch used beer cans—an estimated 50,000 of them. Today his famed Beer Can House is owned by a non-profit arts group and is open to visitors on weekends.

After drinking that in, hit Project Row Houses, at 2521 Holman Street, which turned a block of abandoned homes into a mixture of workshops and galleries for artists in residence. The project has expanded to include community improvement projects, such as a garden, a sculpture park, and renovation of the Eldorado Ballroom—a former nightspot that had been closed since the early 1970s.

The macabre can check out the National Museum of Funeral History at 415 Barren Springs Drive, whose slogan is: “Any day above ground is a good one.” It boasts 33,500 square feet of funerary exhibits, including historical hearses and Victorian mourning jewelry made out of human hair. Don’t forget to check out the video on the history of embalming.