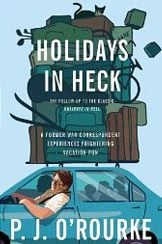 For more than 20 years, journalist P. J. O’Rourke was a foreign and war correspondent – or, as he put it in his 1988 book Holidays in Hell, “what I’ve really been is a Trouble Tourist — going to see insurrections, political crises, civil disturbances and other human folly because…because it’s fun.” At least it was until the Iraq War, when the realization finally dawned that “I was too old to be scared stiff and too stiff to sleep on the ground.” Which is why we now get Holidays in Heck, a collection of milder globetrotting experiences. Fortunately, all O’Rourke’s other characteristics – his boozy hedonism, his political irreverence — remain in place, along with his trademark one-liners. In one chapter, he even manages to make gags about being diagnosed with cancer: “I’m told I have a 95 per cent chance of survival. Come to think of it — as a drinking, smoking, saturated-fat-hound of a reporter — my chance of survival has been improved by cancer.”