Preston Sharp understands what these men and women have sacrificed for our country. 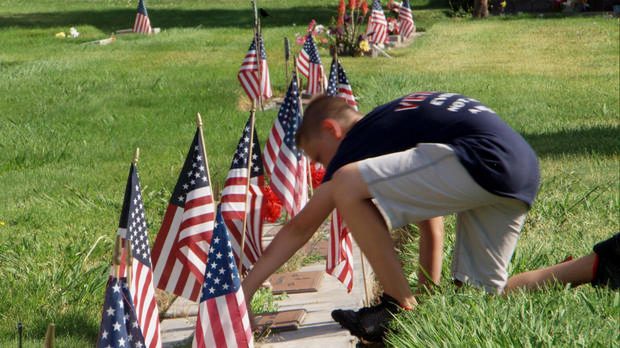 “Yeah, I was surprised,” Preston said. And disappointed.

Preston’s mom, April Sharp, had never seen him like that before. “Not this angry and passionate,” she said.

What upset her son so much was visiting his grandpa’s grave in Redding, California, and realizing that not every veteran in the cemetery had a flag. So April told him, “Son, if you’re going to complain about something, you have to do something about it or let it go.”

Next thing April knew, Preston was taking on odd jobs and soliciting donations to buy flags and flowers for every veteran in his grandpa’s cemetery. And when that cemetery was covered, he moved on to another, and then another.

Here we are, nearly three years and an estimated 65,000 graves later. And he does it every week, rain or shine—especially rain. “They were out there in the rain doing their job, protecting us,” Preston said.

His devotion is contagious. When word gets out that Preston will be at a cemetery—he has a Facebook page, Preston Sharp/Vet flags and Flowers—folks feel compelled to join in. People like Vietnam veteran Fred Loveland. “It’s amazing,” Loveland said. “What he’s doing brings them out because they can’t believe a young man in this country is doing what he does.”

It is a movement of young and old, of those who served and those who are so grateful they did, all led by a proud grandson who saw an injustice and decided to do something about it.

For more ways to help those who’ve served our country, here are 10 simple but powerful ways you can support veterans.