22 Secrets a Locksmith Won’t Tell You 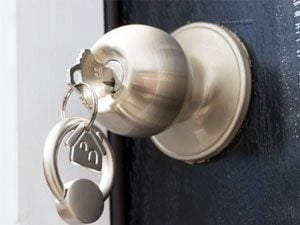 1. Many locksmiths in the phone book or online are scam artists. They’ll quote you a great price, but when they get there, they’ll say you have a special lock they can’t pick, so they have to drill it open. Then they charge you $125 for a replacement lock you can buy at Home Depot for $25.

2. Find someone reputable at findalocksmith.com, the official website of the Associated Locksmiths of America.

4. It’s easy to defeat the cheapo locks from big-box stores. Most are mass-produced by reputable manufacturers but to very low standards. Look for at least a grade 2.

5. The best lock is a dead bolt that’s properly installed. It should have at least a one-inch “throw,” and on the “strike side,” there should be a security plate with screws at least three inches long that go all the way into the door’s wood frame.

6. If you have a window on or near your door, a thumb-turn dead bolt won’t do much good. They knock out the glass, stick a hand in, and turn. Get a double cylinder lock that needs a key on the inside.

7. Keys stamped “Do not duplicate” are duplicated all the time. Ask me about high-security locks with keys that can’t be replicated at the hardware store.

8. Don’t believe a car dealer who says only he can duplicate keys. In most cases, a locksmith who specializes in automotive work can make you a key—usually cheaper.

9. Divorce lock-outs are a challenge. The soon-to-be-ex wife will call and say she’s locked out, so I get her in and change the locks. Then the husband calls with the same request. I refer him to a competitor.

10. Have a housekeeper who needs a key? Ask me to key your door so that your master key works on both the dead bolt and the doorknob, but hers works just on the knob. On the day she comes, lock only the knob.

11. Try the door. I’ve gone to houses and found it open. (I’m still going to charge you for the service call.)

12. If your key won’t turn, try WD-40 or silicone spray. Sometimes the pins get jammed up, and 25 to 40 percent of the time, that solves the problem.

13. If you’re locked out, please call just one of us. More than once, I arrived at a lock-out to find two competitors’ trucks already there. At that point, we all agreed to leave and abandon the inconsiderate victim.

14. Think twice before you buy a locked safe at a flea market, estate sale, or auction. It’s probably going to cost you $300 or more to open it, and chances are, all you’re going to find is mouse poop.

15. Contractors stink at installing dead bolts. I can’t tell you how many times I go out to rekey one or let someone in, and I find problems. If it’s not installed right, it won’t protect you.

16. A lot of us do undercover work for the cops. We make keys for them and get them into places at 3 a.m. so they can set up surveillance equipment or put the bugs in place. It’s part of the thrill of doing what we do.

17. When you buy a new house, always have your locks rekeyed. Otherwise there’s probably a master key out there that can easily open your home.

18. You’re supposed to check ID before you open anything. But half the time when someone is locked out of their house or car, where do you think their ID is?

19. The biggest mistakes people make with their safe: spinning the dial too fast, trying to open it before it’s unlocked, and forcing it closed when there’s obviously a problem.

20. I’ve seen my share of dead bodies. It’s always a bad sign when the landlord calls to get into an apartment, and nobody’s seen the tenant for ten days.

21. Don’t feel bad if you have to call me twice in a short span of time. I once had a guy lock himself out of his house three times in one day.

22. Never tell me, “Don’t worry. It’s an easy lock.” Every time someone says that, it takes an extra ten minutes to get it open. It’s the kiss of death.