He Waited 39 Years to Apologize to the Teacher He Wronged. Too Late to Say Sorry?

Larry Israelson walked out on his favorite teacher's class with no explanation. Decades later, Larry mailed Mr. Atteberry a letter that he hoped would change everything.

When he was 12 years old, the boy did something he only later realized probably hurt his seventh-grade teacher. It was minor—he was, after all, a kid. But in time, when he was older and wiser, he wanted to find this teacher and apologize. But the teacher seemed to have vanished. Over the decades, the boy—Larry Israelson, now a man—occasionally turned to the Internet, typing the teacher’s name into search boxes. He never found anything. But he never quit looking. Last year—by now nearly 39 years after the event happened—he got a hit.

Stunned, he started reading a story I had written in the Oregonian about a program that helps at-risk kids. He studied an accompanying photograph and recognized his teacher, who was a volunteer. He then e-mailed me:

You published an item involving retired teacher James Atteberry. Mr. Atteberry was a teacher of mine in the early ’70s, and I wish to apologize to him for a regrettable incident that occurred when I was his student. Would you be willing to serve as an intermediary and deliver a message on my behalf?

I contacted Atteberry. Intrigued, he told me to respond to this former student and see what happened. Shortly thereafter, I received an overnight package containing a sealed envelope, which I then forwarded to Atteberry.

When I mentioned this letter to people, they all reacted in the same way: They each had someone they wished they could apologize to. And they told me that by the time they realized that truth, it was too late.

In my case, it was someone who has haunted me for decades. 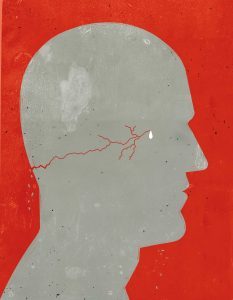 My third-grade teacher had organized a Christmas gift exchange. On the big day, we sat in a circle, taking turns ripping open a fancy package containing a new toy. Then it was my turn. The teacher handed me something that had been wrapped in paper that was clearly reused. It was so wrinkled and re-taped that the colors had faded. With everyone watching, I peeled back the paper and pulled out a cheap paperback book with torn and dirty pages.

Tucked inside was a handwritten note identifying the girl who gave it to me. When I announced her name, my classmates started laughing. Her gift was yet another indication of just how different this girl was from the rest of us. She’d arrive late to class, her hair wet and unkempt. She didn’t have friends, and the popular students made fun of her because she was poor and wore old clothes.

Even though this incident happened nearly 50 years ago, I remember that afternoon as if it were yesterday. As the class laughed, this eight-year-old girl turned in her chair to hide her tears while the teacher unsuccessfully tried to restore order in a class that had turned on the weakest among us.

At that moment, I was worried that the popular kids would think that this girl and I were friends. So I didn’t thank her or even acknowledge the gift. Only decades later—like Larry Israelson—did I realize that what I did next was unforgivable: I tossed the book in the garbage.

For years I wanted to apologize. So while waiting to see what became of Israelson and Atteberry, I typed her name into an Internet search field. I found nothing. I realized then why Israelson was so intent on finding Atteberry. It was all about getting a second chance.

As James Atteberry read the letter, he was brought back to 1973, when he was a middle school history and composition teacher in Huntington Beach, just south of Los Angeles. He was 37, got great reviews, and was well liked. He was also gay.

“If a teacher was found to be gay, his contract would not be renewed,” Atteberry said. “Gay teachers kept their mouths shut. People of this era might not understand it. But it was an intense time. An art teacher in the school made a stupid mistake, and that was the end of his career. I never talked about my life.”

And yes, he told me, he remembered Larry Israelson.

I am truly sorry for asking to be transferred out of your seventh grade social studies class during the 1972–73 school year. I don’t have many memories from school, but at the top of one of my assignments you wrote “You will go far in life. Your command of the English language is exceptional.” Looking back on my younger self, I am certain that I reveled in being one of the teacher’s pets. As comfortable as I was in a classroom, however, the boy’s locker room was something else entirely.

On the phone, Larry Israelson’s voice is low, strong, and confident. He stands, he says, six feet five inches and played water polo in high school and in college.

“But when I was 12,” he said, “I was a scrawny little kid who was into books. A lot of the athletic guys loved to tease those of us who were weak. You know what it is to feel powerless?”

Some students suspected Atteberry was gay. A boy in class asked Atteberry what he thought about a proposed law banning gay teachers. When Atteberry asked the boy why he’d posed the question, the student said his father had specifically told him to ask Atteberry. The teacher chose his words carefully.

Israelson was one of his best students. Bright and articulate, he submitted essays that Atteberry thought were remarkably good. “I would praise Larry in class,” Atteberry said. “That was his downfall.”

In the locker room, boys began picking on Israelson.

“They started saying ‘Larry’ and then ‘fairy’ and rhyming it with ‘Atteberry,’” Israelson recalled.

When he pleaded with them to stop, he was challenged to a fight.

The teasing intensified, with the taunts becoming more sexually explicit and graphic. Israelson told no one. One day, when he could no longer stand it, he showed up at the principal’s office and said he needed to leave Atteberry’s class. The principal couldn’t understand why, but he eventually signed a transfer slip and handed it to Israelson. The student walked into Atteberry’s classroom, interrupted the lesson, and handed Atteberry the slip. Without a word, Israelson gathered his books and walked out the door.

“There was no goodbye, no explanation,” Israelson said. “I just disappeared. I never talked to Mr. Atteberry again.” 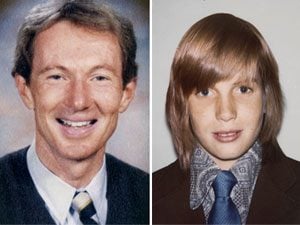 When it comes to apologies, no one gets a pass in this life. Everyone deserves one, and everyone needs to give one. When Israelson married, he was the first Anglo to marry into a Mexican-American family. More than a decade into the marriage—by this time, he and his wife, Conny, had two daughters—his brother-in-law invited him out for a beer. After some small talk, his brother-in-law took a deep breath and got to the point.

“He apologized,” Israelson said. “He said that he hadn’t wanted an Anglo in the family. He’d lobbied behind the scenes to try to get his sister to break up with me. He said he’d felt bad about it for all these years and decided it was time to make it right.”

That phrase made Israelson think of Atteberry. The man had inspired and encouraged Israelson at a time when a compliment or praise scrawled across the top of an essay so mattered in a boy’s young life. He thought about what it must have been like for Atteberry to hide who he was. Israelson intensified his search. A decade later, he found my story.

Israelson had been writing an imaginary letter to Atteberry for over 30 years. But now he struggled to find the right words. He was “truly sorry” for asking to be transferred, he wrote. “I know my age was a mitigating factor, but when I replayed this incident in my adult head, it shamed me.”

He sealed the envelope and sent it to me to be forwarded to Atteberry. He expected nothing more. He had done what he had set out to do, and now it was over.

When Atteberry read the letter, he, too, remembered what it had been like to be a boy. Like Israelson, he had been bullied. Two athletes had grabbed him when he was walking home, forced him to pull down his pants, and whipped him with a belt. Shamed, he told no one, the matter made worse when the athletes tormented him by demanding each day that he turn over his lunch money to them.

In a strange way, this letter allowed Atteberry to come to terms with his own past. He was not alone.

Atteberry had always wondered why Israelson had left his class. Was it something he did or said to this student? Now he knew.

He set the letter aside, went to his computer, and typed Israelson’s name into a search box. He found the address and a telephone number.

One thousand miles away, a phone rang. A man answered.

“Larry,” a voice on the other end said, “this is your teacher.” 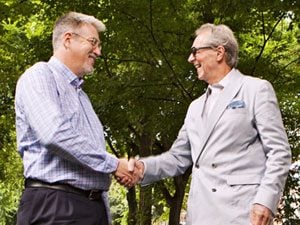 Reader’s Digest arranged for James Atteberry and Larry Israelson to meet after 40 years. The former teacher arrived early at the hotel lounge. He sat peering at everyone to see if he could recognize his old student. Then he spotted a tall man ambling toward him. “What happened to that little guy?” he asked, smiling.

“He grew up,” said Larry Israelson.

After a long hug and some catching up, Atteberry jumped into the subject that had brought them together in July—that article published in the Oregonian. “I was puzzled why you left the class. I knew it wasn’t because you were rotten,” Atteberry said with a laugh. “It was survival. In junior high, it is survival of the fittest.”

Both men voiced surprise over the attention the article had received—the calls, letters, and e-mails sent their way from around the world.

“The takeaway is optimism,” reasoned Israelson. “There are universal themes of an apology sought and forgiveness granted.”

At the end of their reunion—which included lunch with Israelson’s wife, Conny—Israelson accepted an invitation to visit Atteberry and his partner next year.

“How wonderful it is that we can go back into our past,” said Atteberry later. “All of this has made me think about what a wonderful life I have lived.”

Tom Hallman, Jr., is the author of A Stranger’s Gift: True Stories of Faith in Unexpected Places and Sam: The Boy Behind the Mask.