5 Great Reads To Take You Inside the Inauguration

While second presidential inaugurations tend to lack the fireworks of the first—it will be hard to top Aretha’s hat, as 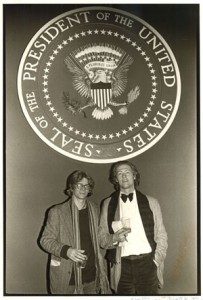 While second presidential inaugurations tend to lack the fireworks of the first—it will be hard to top Aretha’s hat, as well as the million-plus visitors that poured into the capital for 2009’s historic event—they remain the symbolic commencement of a fresh term. The important date is really Sunday (according to the Constitution, the President’s power expires on at noon on January 20), but the official ceremony will take place Monday. We’ve rounded up five reads to get you pumped for the big event.

– For a quick recap: CSPAN condensed every presidential inauguration speech since Reagan into 36 seconds of inspiring video.

– For a history lesson: As this light-hearted and thoroughly detailed history of second inaugurations points out, a President’s second term is typically heralded with much less fanfare than the first (even by the President himself). My favorite piece of trivia from the article: George Washington’s second inauguration speech is the shortest in inaugural history at a mere 135 words.

– For a brain teaser: See how much you retained from your Middle School Social Studies class with this inaugural quiz from the National Archives.

– For a behind-the-scenes: Since we can’t all be in D.C. to see for ourselves, The New York Times’ politics blog, The Caucus, has had daily updates on inauguration planning, like an insider look at the eight floats that will ride in Monday’s parade and a preview of the weekend’s schedule.

– For a lazier read: This slideshow of past presidential inaugurations from Yahoo News is worth a look, if only for the first few slides. The earliest inaugural photographs from the early 20th century portray Presidents Theodore Roosevelt and Howard Taft in an almost unrecognizable capital city.

And just for fun, the New York Times launched a new interactive, Build Your Own Inauguration Speech, compiled from excerpts of addresses past.