6 Compelling Reasons Why Gary Busey Should Be the Next Pope

In focusing exclusively on established cardinals, Vatican judges have ignored the obvious frontrunner for the world's next Top Pope: prolific actor-turned-altruist Gary Busey. 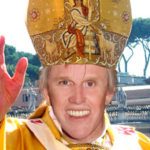 Hear us out. According to the New York Times, Vatican talent scouts seek a pope with “charisma,” “grit,” and “magnetic charm”—and Gary Busey’s got the holy trinity in a way that pretty much locks down this whole papal race for us.

Non-believers, look no further than Twitter. Pope Benedict XVI became the first pontiff in history to transmit 140-character homilies to more than 1.2 million followers around the world. Busey preaches to a considerably smaller flock, but nonetheless utilizes his tweet feed to spread unfiltered messages of love, faith, and pancakes. Here’s why the guy has our vote.

5. He is a master of religious rhetoric.

6. Above all else, He is penitent.

18 Funny Wedding Photos That Will Make You Laugh Out Loud