We’ve read about so many heroes of that fateful day, yet somehow this mission—the largest of its kind in history—remains largely unknown 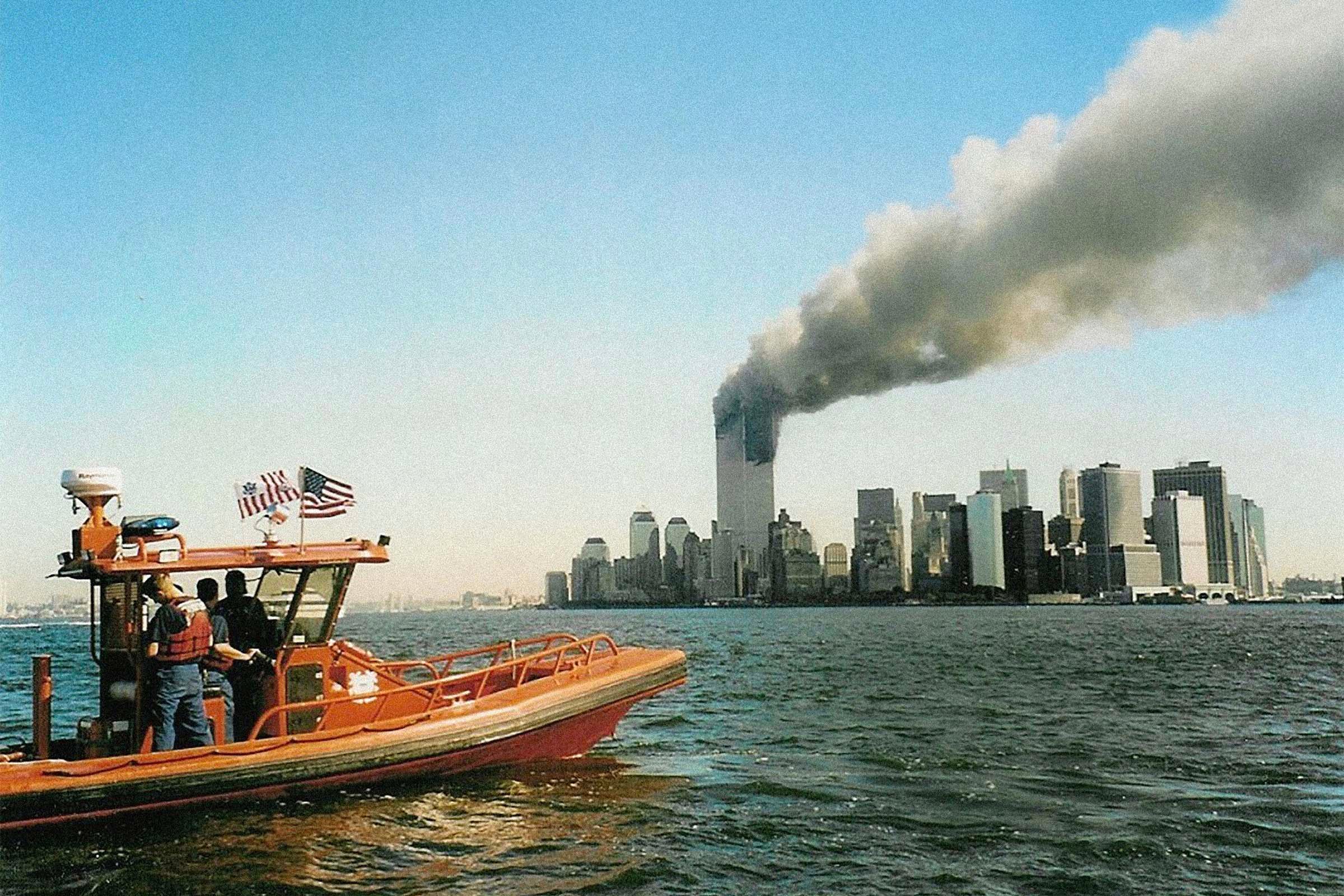 On a bright-blue morning 21 years ago, Coast Guard Lt. Michael Day was at his office on Staten Island, looking out over lower Manhattan. He was a relatively junior officer whose job involved the safety and navigation oversight of the New York waterways. He also dealt with all the odd questions that tend to crop up in the congested rivers and harbor of one of the largest cities in the world, like queries related to charity swims and the Macy’s Fourth of July fireworks. He had negotiated with the Mets when their new stadium lights blinded mariners, and he’d had to tell David Letterman that, no, he could not launch watermelons across the Hudson River toward New Jersey.

It hardly seemed a job destined for history. So, soon after 8:46 a.m., when he heard that a plane had crashed into one of the World Trade Center towers, Day had the same thought that so many Americans did: What an odd accident. Likely a small plane—maybe a helicopter. He watched CNN for a few moments, then went back to his desk and kept working. Every so often, he’d glance over his shoulder at the plume of smoke visible out the window, but he wasn’t alarmed. He’d worked in the Twin Towers in his previous job with the Port Authority, and everyone knew how robust they were—the legend was that they could withstand a Boeing 707 crashing into them. Whatever had happened, it was not a job for the Coast Guard.

Then the second plane hit. And the chaos began.

The beginning of the 9/11 boat lift

Over the hours ahead, Day and his colleagues at the Sandy Hook Pilots Association—the specially licensed sailors who help larger vessels safely get in and out of the harbor—would help orchestrate the largest maritime evacuation in world history, larger even than the famous British rescue at Dunkirk.

With no plan and little direction, they would cobble together a makeshift civilian armada of fishing vessels, pleasure yachts, tugboats and passenger ferries that would evacuate an estimated 500,000 people from the tip of lower Manhattan—desperate, worried, dust-enveloped people trapped by the closure of the island’s bridges and tunnels. Today, the maritime rescue and evacuation of lower Manhattan remains one of the least-known dramas of that day—perhaps the greatest mostly unknown story of 9/11.

In that first hour, the morning kept turning from bad to worse. The ­collapse of the South Tower and the ensuing cloud of debris rendered the Coast Guard’s harbor radar blind. ­Reports began to come in of panicked crowds piling up along Battery Park at the southern tip of Manhattan.

Day decided to head there himself. He met up with a Sandy Hook pilot at a nearby dock, and with the crew of the Pilots Association’s main station boat, the 184-foot New York, they steamed toward lower Manhattan. The scene looked almost biblical as they drew closer, with gray smoke hanging over the Hudson. This, Day recalls thinking, is Pearl Harbor.

“You could see everyone on the piers,” Day told a Coast Guard historian in 2002. “It was wall-to-wall people.”

By the time the New York arrived at Battery Park, some boats were already beginning to ferry people away. It was clear to Day and the Sandy Hook pilots, as they nosed around the southern edge of Manhattan, that the scale of the ad hoc effort was being dwarfed by the swarms of evacuees. Some people ended up in the water, jumping for safety in fear of further collapses, or falling in amid the confusion.

Calling in backup for the 9/11 boat lift

At midmorning, they called for help—lots of help. As Day told me, “We decided to make the call on the radio: ‘All available boats, this is the United States Coast Guard aboard the pilot boat New York. Anyone available to help with the evacuation of lower Manhattan, report to Governors Island.’ ” The Coast Guard’s Vessel Traffic Service for New York—the equivalent of the harbor’s air traffic controllers—put out a similar call. New York’s mariners answered, and within 15 to 20 minutes the horizon began to fill with boats of all shapes, sizes and functions.

The flotilla that day included upward of 130 boats: harbor launches, fishing vessels, sightseeing ships and dinner-cruise boats, as well as 33 ferries and 50 tugboats, plus numerous fire department, police department and Coast Guard rescue boats. An NYPD marine officer, Keith Duval, had even commandeered a pleasure yacht from the nearby North Cove Marina. “Rich people always leave the keys in the boat,” Duval told a fellow officer. Sure enough, after finding the keys, Duval and his colleagues made 10 trips to New Jersey and back over the course of the day.

For hours, Day and the Sandy Hook pilots played traffic cop, ushering boats in and out of the area. The harbor was so crowded with vessels that Day and the pilots switched to communicating with the other boats by hand signals—the radio channels were too overloaded for the finesse needed to navigate safely. Waves of boats came in empty, loaded up and moved back out.

At one point, someone suggested emptying North Cove Marina of the rest of the fancy yachts docked there. Day gulped and gave the go-ahead, watching as tugboats pulled out one multimillion-dollar vessel after another. Oh boy, I hope I’m doing the right thing, he thought.

“I broke more rules that day than probably I’ve enforced in my whole Coast Guard career,” Day said later. “We authorized a lot of regulations to be broken.”

A Staten Island ferry, for example, which normally handles 5,200 passengers, left on one trip carrying more than 6,000. Day was amazed at how naturally people reacted to authority—any authority.

At one point, a diesel barge pulled up at the seawall to begin refueling the fire trucks that were tirelessly throwing water on the still-burning blazes at ground zero. A city official tried to protest that the barge needed a permit. Day intervened, making it up as he went along, announcing, “This is a Coast Guard operation, and I’m telling you that it’s authorized right now.” The official accepted the explanation and left.

The volunteer crews began to hang banners from their bows with their intended destinations—Brooklyn, Staten Island, New Jersey—but mostly they found people eager to leave to wherever. “All I wanted to do was get off that island,” said a teacher at a high school that was located in the shadow of the towers.

The line of evacuees stretched for blocks, with some people waiting more than three hours for a ride. ­Every boat seemed to pull away overcrowded. “It was like being the last lifeboat on the Titanic,” ferry captain Rick Thornton recounted later to writer Jessica DuLong, whose book Dust to Deliverance is one of the few accounts of the boat lift.

Many of the evacuating boats carried away injured victims. Day and other officials tried to coordinate where ambulances were waiting in New Jersey, Staten Island and elsewhere. “We were getting calls from cell phones,” he said. “I remember someone on Ellis Island saying, ‘We’ve got 40-odd ambulances lined up—bring them over here.’ And then hearing someone else, ‘We’ve got ambulances over here in Brooklyn. Bring them here.’ ”

When boats pulled away from lower Manhattan, evacuees got their first glimpse of the changed skyline behind them—and that’s when they understood the enormity of the attacks. Frank Razzano, who that morning had been staying in the Marriott hotel nestled between the Twin Towers, recalled how he hadn’t even understood that the buildings had completely fallen.

“As we were going across the river, I was looking back at the city, expecting to see the World Trade Center—expecting to see a tower with the top off. They weren’t there,” he said later. “I said to the guy driving the boat, ‘Where’s the World Trade Center?’ He said, ‘Buddy, they’re gone.’ I said, ‘Look, I was there when the tops of the buildings came down, but where’s the rest of the buildings?’ He said, ‘Buddy, it wasn’t the tops of the buildings. They collapsed down to the foundations.’ ”

As lower Manhattan gradually emptied boat by boat, the mission of the boat lift shifted. Instead of taking civilians out, by around 4:30 p.m. the flotilla began to bring rescuers and supplies in from New Jersey. “We started getting calls that supplies were coming into Jersey and all the bridges were shut down into Manhattan,” Day said. “They said, ‘Hey, can we get someone to pick up some supplies?’ I asked if anyone would mind going over to Colgate in New Jersey and picking up some supplies, and I was inundated. ‘Sure, I’ll do it.’ ‘I’ll do it.’ ‘I’ll do it.’ Great. It wasn’t my intent—it just kind of happened.”

As the hours passed and the needs grew, the supplies multiplied—bottled water, acetylene for steel cutting, oxygen, wrenches, meals. At one point, Day saw a request from New York City officials for 20,000 body bags.

This Herculean effort went largely unnoticed by the media at the time. And yet, the boat lift stands out as one of the most illustrative threads of the day. First, it is an example of an event that, on any other day, would rank as among the most dramatic in American history. But like the air traffic controllers who urgently landed 4,500 planes nationwide, or Vice President Dick Cheney’s mustering the U.S. government’s response from the bunker underneath the White House, the maritime evacuation of lower Manhattan was initially unnoticed in the midst of the enormous calamity of the attacks.

Second, and perhaps more important, the boat lift is the largest-scale example of what is the ultimately hopeful legacy of 9/11—that in reaction to the worst evil humankind can offer, Americans of all stripes that morning came together to help.

Late that evening, Lieutenant Day and the Sandy Hook pilots walked into lower Manhattan for the first time. The devastation awed him. “There are papers coming down—there’s always like snow, from the white ash, whenever a breeze would come up,” he said. He paused, considering the buildings that he’d once worked in. “Unrecognizable.”

But most of all, in the dark of that night near ground zero, with the power off and fires burning all around, he remembers the chirping emergency distress signals from scores of firefighters buried in the rubble. In a day where his efforts had helped rescue the equivalent population of a midsize city, the sound that haunts him is that of all the people who weren’t saved.

Originally Published in Reader's Digest
New York Magazine (September 11, 2021), Copyright © 2021 Vox Media, LLC.
Now Trending
These Are the Best Black Friday Deals You Don’t Want to Miss in 2022
I Survived 9/11—These Are the 13 Questions Young People Ask Me the Most
9/11 Survivor Stories: Twists of Fate That Saved These People’s Lives