A small secret: I enjoy a drink with my reading every now and then, but I’m not fancy. After grabbing 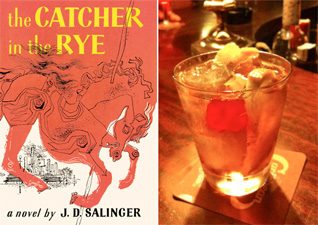 A small secret: I enjoy a drink with my reading every now and then, but I’m not fancy. After grabbing Haruki Murakami’s long-awaited “1Q84” last year, I opened a Brooklyn Lager and started reading.

A bit more enterprising is Flavorwire‘s Emily Temple, who’s put together a list of 10 great novels and the cocktails you should pair them with. One simple, perfect match is J. D. Salinger’s “Catcher in the Rye” with an Old Fashioned: “We know Holden is a Scotch and Soda man himself, but it’s the Old Fashioned that most reminds us of existential angst and dark evenings in New York City in the fifties,” writes Temple. Check out her recipe below:

Other inspired picks: a Salty Dog for “Moby-Dick,” an absinthe-green Death in the Afternoon for “Alice’s Adventures in Wonderland,” and the over-the-top French 75 for “The Great Gatsby.” See all of the pairings at Flavorwire »