A Movie That Sings, From a Member of the Dave Matthews Band

When I trace back the events that have led to my greatest happiness, inevitably I arrive at this little musical 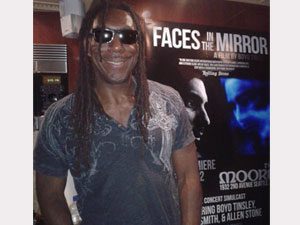 When I trace back the events that have led to my greatest happiness, inevitably I arrive at this little musical group from Charlottesville, Virginia: The Dave Matthews Band.  So when I found out that Boyd Tinsley, violinist for the band, has a film out, I two stepped, erm, I mean jumped, on the chance to review it.

Have you ever watched a film that effects you so viscerally that weeks later it still informs your actions and colors your perceptions? What about a film that inspires you to finally make that one apology you haven’t been able to muster the courage to make? Or one that permeates your thoughts so much you’re suddenly hosting impromptu viewing parties at your house to share it with others? Nope, neither have I — until I watched “Faces in the Mirror.”

The story dances colorfully around Ben Fisher, a twenty-something who has come home for his father’s funeral. Regret — for the “what could have been” —along with anger — for being neglected by a workaholic dad — swirl with notes of joy and hedonism as Ben goes on a Homeric-worthy journey through mystical worlds. “This is a film that’s not only meant to be seen, it’s meant to be experienced. An experience of music, visuals and emotion,” says Tinsley. The catharsis may never come for Ben in the film’s 80-minutes, but it will for you.

A month later, I still catch a different nuance every time I watch — whether it’s another mirror symbol in the background or a new riff in the music — and that, just like the band’s albums, is the pull that keeps me coming back.

Purchase the film on Amazon or iTunes and follow along with the fun @BT_DMB and @FacesFilm.

You can watch the trailer here:

Recently, I was lucky enough to sit down with Boyd to hear more about his feature film debut:

Filming and Photography Courtesy of Jacob A. Vogel

Smart Strategies for Organizing Your Kid’s Closet
How Star Wars Helped Me Bond with My Dad
12 Titanic Survivors: What Happened to Them Next