All that stood between them and a raging flood was a tiny cement shack—and time was running out. 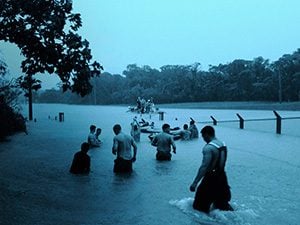 Courtesy U.S. Air ForceFor two days, Typhoon Neoguri had battered the Japanese island of Okinawa with 100 mph winds, uprooting trees and ripping wooden buildings from their foundations. On Kadena Air Base, the hub of U.S. air power in the Pacific, 20,000 residents—service members, families, and civilian employees—had been confined to quarters under an emergency order. By nightfall on July 8, 2014, however, the worst seemed to be over. At 10 p.m., when Airmen First Class Brandon Miles and Roderick Jones arrived for their shift at the munitions-dump guard shack, all that remained of the tempest was the relentless rain.

As their ride dropped them off, Miles noticed that a small pond had collected in an underpass 200 yards away. “Bro, I bet that water’s going to be up to the shack by morning,” he said with a laugh. Jones agreed, adding, “Hopefully, not until we’re off duty.”

Inside the concrete shack, it was dry and snug. Jones—a husky, six-foot-two-inch 20-year-old from Houston—settled behind the single desk. Miles, 21, an Oklahoma City native who was four inches shorter and 50 pounds lighter, hunkered on a bench. Although both men wore the uniform of the security forces, the branch of the Air Force responsible for law enforcement and base defense, their personalities were as different as their physiques. Jones was quiet, easygoing, and upbeat; Miles was outspoken, intense, and irascible. Jones loved to explore the local beaches and restaurants; Miles disliked swimming and was leery of foreign food. But they relished each other’s company and had been close friends since basic training. In their free time, they often took long drives around the island. Jones let Miles—a former college DJ who played piano, trumpet, and drums—pick the tunes on the car stereo.

Tonight, they spent the watch studying their workbooks for a career-development course and opening the entrance gate for the few vehicles that came through. At dawn, the rain was still sheeting. Glancing out the window, Miles grinned. “See? I told you,” he said. Several inches of water covered the pavement. Around 6:30 in the morning, the men heard a metallic crashing sound, like a ship being battered by waves. Looking out, they saw that what had been a shallow pool was now a knee-deep, chocolate-colored torrent, carrying twigs and other debris and rising rapidly. Miles went to the door, but it wouldn’t budge; the pressure of the flood was too great. “You try,” he said to Jones. “You’re bigger.”

Jones threw his weight against the door, without success, as water began seeping across the threshold. Grabbing his two-way radio, he called the base defense operations center, half a mile away. “We’re in trouble,” he said. “We’re going to need somebody to come and get us.”

T. Sgt. Kevin Spain took the call. “We’ll send someone out there as soon as we can,” he said, “but our patrols are tied up right now.” There was minor flooding all over the base, he explained, and the security force’s vehicles were out trying to keep traffic moving. Spain, 31, tried to sound nonchalant, but the crew-cut father of three knew how treacherous a typhoon’s wake could be. He radioed an alert to his scattered troops and waited with growing anxiety as 15 minutes ticked by.

When a Humvee returned to headquarters, Spain gathered a few defenders (as security personnel are called) and jumped behind the wheel. The base’s perimeter road was impassable, so he navigated a muddy hillside, picking up his fellow flight chief—M.Sgt. Brad Reeves, who’d been trying to reach the shack on foot—along the way. Around seven, they arrived at the first of two gates separating the main base from the munitions dump.

One of Kadena’s fire trucks was already there. But the gate was locked, and no one had the key. To their horror, the defenders saw that the guard shack, down the hill, was almost submerged. Just then, a call came in from the operations center: The video screen monitoring the area had gone blank. Spain realized that water had engulfed the camera, which hung from the eaves of the shack. If the team couldn’t get in quickly, it would be fishing out a couple of corpses.

While they waited for help, Miles and Jones switched off the shack’s circuit breaker to avoid being electrocuted. Outside, the flood surged above the windowsills; inside, it rose to their shins. Jones crouched on the desk and Miles perched on a stool, but the water soon crept to their waists. The men’s hopes lifted as they watched the rescuers’ vehicles pull to a halt. Then the water outside reached the top of the window, and they could see nothing—except for small fish swimming through the murk.

Jones radioed for permission to shoot out the glass. “Denied,” Master Sergeant Reeves responded. “It’s bulletproof. A ricochet could kill you.”

By now, the water inside the shack was just a few feet from the ceiling. The two men struggled to stay calm. They told each other jokes, not all of them printable. When a spider skittered across the surface, Jones flicked it toward Miles, for the fun of watching his arachnophobic buddy flinch. But it was becoming harder to distract themselves from the seriousness of their plight. Jones felt a need to take some sort of action. “There’s too much water in here for a bullet to ricochet,” he told Reeves. “At least let me try it.” The flight chief relented, and Jones fired 15 shots from his 9 mm pistol. The slugs barely dented the pane before sinking away.

After a firefighter severed the padlock with a bolt cutter, the vehicles splashed across a waterlogged highway and drove downhill toward the second gate, which barely rose above the flood. Spain swam to it, clambered over the barbed wire, and plunged underwater to slice through the lock. He and Airman First Class Cody Watson then swam to the guard shack, whose gently curved roof was its only visible feature. They dove again and again, feeling along the walls for a way in, but the effort was futile.

The firefighters—some of them Air Force, others Japanese civilians—rigged a rope line from their truck to the shack and began ferrying tools and rescuers along it. Soon there were seven or eight men on the roof, hacking at the foot-thick concrete with axes and sledgehammers. They worked in shifts as the rain pelted down. But the shack had been built to resist grenades, and the furious pounding left it virtually unscathed.

Inside, Jones and Miles were treading water, with inches of breathing room left. To keep their hands free, they’d dropped the radio. Now the only sounds in the shack were their rapid breathing, the sloshing of the flood, and the muffled blows of the rescuers’ tools. Both men were praying for themselves and their families. Miles, who was raised by a single mother, repeated silently, “Please don’t do this to my mom.”

Outside, a second fire truck pulled up at the gate, delivering a K-12 rotary saw—specially designed for first responders. Around the same time, Jones bumped his head against the ceiling and dislodged a gypsum tile. Pushing it aside, he discovered another two feet of space between the ceiling and the roof. Suddenly, both men were energized. Jones began tearing at the web of metal struts from which the ceiling hung. Miles, who’d worked in construction as a teenager, found the latches that held the system in place. The struts fell away, giving him and Jones precious headroom.

An instant later, they heard the saw’s motor roar to life, followed by the snarl of its blade biting into concrete. The trapped airmen cheered and pounded on the underside of the roof. Within minutes, two 18-inch slits had appeared above them, slashes of brightness piercing the gloom. The smell of exhaust filled the air, and grit sprayed their faces. Then came a grating sound, followed by silence. “Keep going!” the men yelled.

On the roof, the rescuers groaned: The saw had jammed. They returned to their sledgehammers, abetted this time by chisels and crowbars. Chunks of concrete showered Miles and Jones as the slits widened and merged. But the rescuers soon faced another obstacle: layers of inch-thick rebar, arranged in tight grids. They used an ax and the bolt cutter to chew through the iron rods. The water kept rising. Once again, the trapped men had only inches left.

Finally, the opening formed a rough square. A hand reached down, and Miles grasped it. Jones watched his friend rise to freedom. When his turn came, however, his shoulders wouldn’t fit. As the rescuers frantically expanded the hole, a firefighter offered to escort Miles to a waiting ambulance. “I’m not leaving until my wingman does,” Miles answered.

At 7:30—an hour after he’d radioed for help—Jones emerged, gasping for breath. The rescuers whooped and hugged. At that moment, the rain stopped.

Although Miles and Jones were physically unharmed by their ordeal, they were changed in other ways. Both discovered that they’d lost the sense of immortality that buoys most young men. “It made me more introspective,” Miles says now. “For the first time, I actually value my life.” Jones suddenly awakened to the transience of time: “Before I die,” he declares, “I want to do something in my career to leave an impression.”

The guard shack, too, underwent a major alteration—its roof was fitted with an escape hatch. And 17 responders received Air Force commendation medals for their courage in the flood. “They were there for us all the way,” says Jones. “They were willing to do whatever it took to get us out.”

The Easiest, No-Fail Way to Tell If Eggs Are Still Good
This Woman Was Trapped in Her Car on an Embankment for Days Before Concerned Neighbors Found Her
This Man Broke 15 Bones When He Fell into a Glacier—Here’s How He Survived