This citrusy solution gets rid of all sorts of stinky situations.

If you’ve got pets of any kind at home, this Angry Orange Pet Odor Eliminator is the viral cleaning sensation you’re going to wish you knew about sooner. It handles pet odor removal so well that it has quickly become an Amazon bestseller with over 70,000 ratings and a devoted customer base that calls it “magic” for getting pet urine out of carpets. I was skeptical that it could handle the constant odors from my cat’s litter box, but boy, was I happy to be wrong.

This ready-to-use pet odor eliminator comes in a neon orange spray bottle that’s easy to spot in your cleaning supplies cabinet. It boasts a full 24 ounces of cleaning solution that works both as an air and surface deodorizer. The product’s clever use of concentrated orange oils actually helps clean, disinfect, and deodorize flooring of all types, which means you can also use it for removing pet stains. The enzyme-based formula breaks down messes and odors almost instantly without damaging fabrics or floors, and doesn’t rely on heavily irritating synthetic chemicals to get the job done.

How to use Angry Orange Pet Odor Eliminator

If your pet smells have reached critical levels, you’ll be tempted to fill the air with this super strong citrus scent, but a little goes a long way. For fabric surfaces such as carpet, lightly spraying Angry Orange onto the affected area and blotting dry is usually enough to remove both the stain and the stink. If the mess still lingers, repeat the process and allow Angry Orange to soak in before running a carpet cleaning machine over the affected areas.

Shoppers are enthusiastic about Angry Orange Pet Odor Eliminator‘s mostly natural essential oil and enzymatic formula, which sets it apart from typical mass-market cleaning products. Other spot carpet cleaners are effective, but have a medicinal or bleachy scent that’s not very pleasant. While very strong (again, use it sparingly!), Angry Orange really does smell like citrus and leaves me wondering if that cat poop smell was ever there at all.

How I tested Angry Orange

Odor elimination is my biggest concern as a cat mom. Though I’m a lucky to not have to deal with cat pee in the carpet, even the best litter doesn’t stop cat urine smell from wafting through the house, and poop odors are even worse. I didn’t have to wait long after receiving this product to spray it around the litter box and test whether it could truly zap those offensive smells. To my delight, after one or two spritzes, the whole litter area (and the hallway leading to it) smelled like a fresh, orangey breeze. The effect was instantaneous. I even dared to lean close to the litter box to really test Angry Orange’s effectiveness, and it held up impressively.

Sometimes my cat vomits if he eats too fast, and after one such instance on the carpet, I had occasion to try out Angry Orange as a stain remover as well. I cleaned the, erm, chunky parts away, but there was still a dark spot on the carpet. Two sprays of Angry Orange and a little help from my trusty Bissell Pet Hair Eraser handheld vacuum worked like a charm. But probably any good pet hair vacuum would work.

This mighty odor eliminator stops smells of every kind before they can spread. Not only is it effective for cat odors, but I also use it near the kitchen trash when things get smelly there, and as a go-to spot carpet cleaner. For dog owners, I’d recommend it for getting rid of dog smell and helping clean dog poop from the carpet. If I had more than two thumbs up to give it, I would. Run, don’t walk to this purchase!

What I liked about Angry Orange:

What to consider about Angry Orange:

Other reviewers say they use bottles of Angry Orange pet odor eliminator spray on everything from litter boxes to kennels, chicken coops to cat carriers, and even car upholstery that is used to having a pet passenger or two.

“A product that reliably eliminates cat urine is basically magic,” writes verified Amazon purchaser Lacy. “Cat urine used to be a death sentence to any item. Now I won’t use anything other than Angry Orange. My cat chooses a rug to pee on a few times a year, and this product saves the rug every time. I’ve also successfully used it on bathroom tile and grout.” Lacy continues, “The product itself smells very strongly, though pleasantly, and fades over a few days. It doesn’t just cover up the urine smell, though, it really does get rid of it.”

Megan W., another verified Amazon purchaser, writes of the medical reason her dog smelled bad and left awful odors behind: “My 100-pound Northern Inuit got a stomach bug a few days before Thanksgiving and woke me up at three in the morning to the sound of liquid hell breaking loose on my bedroom carpet. I have a 20-year-old carpet. I have bedroom windows that won’t open. I thought I was going to suffocate because of the smell. My existing cleaner did the best it could, but the weird licorice smell combined with—well, you know—didn’t improve matters much. So I ordered Angry Orange and I swear on my dog and two cats, you can’t even tell the accident was ever there. I can’t believe it got rid of the lingering sour smell even without proper ventilation. Now my dog is better and I can sleep in my own bedroom again. Life saver.”

The best place to buy Angry Orange pet odor eliminator is Amazon, where a 24-ounce bottle sells for $29.99. The brand also offers a bundle with a UV light for just a couple extra bucks that serves as a pet urine detector so you can check to see if your pet stains were really eliminated. But really, if you save even one rug with a bottle of Angry Orange, it’s paid for itself.

Want more deals and product picks sent directly to your inbox? Sign up for the Stuff We Love newsletter.

20 Best Dog Beds for Every Type of Dog

65 Best Gifts for Cat Lovers and All Feline Fans

8 of the Best Toothbrushes for Dogs, According to Vets 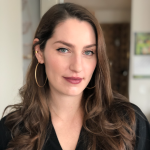 Reina Glenn
Reina is a senior editor with Reader’s Digest. A generalist by trade, she’s produced stories on everything from food to finance and has worked with national brands like Kroger and Canon. She also runs the newsletter for Reader’s Digest and leads most of the product and purchasing content you see here.

The Best Pet Stroller on Amazon, According to our Pet Expert