12 Signs Your Back Pain Is Actually Ankylosing Spondylitis

Ankylosing spondylitis may be the most common disease you've never heard of—not to mention the true cause of your low-back pain. 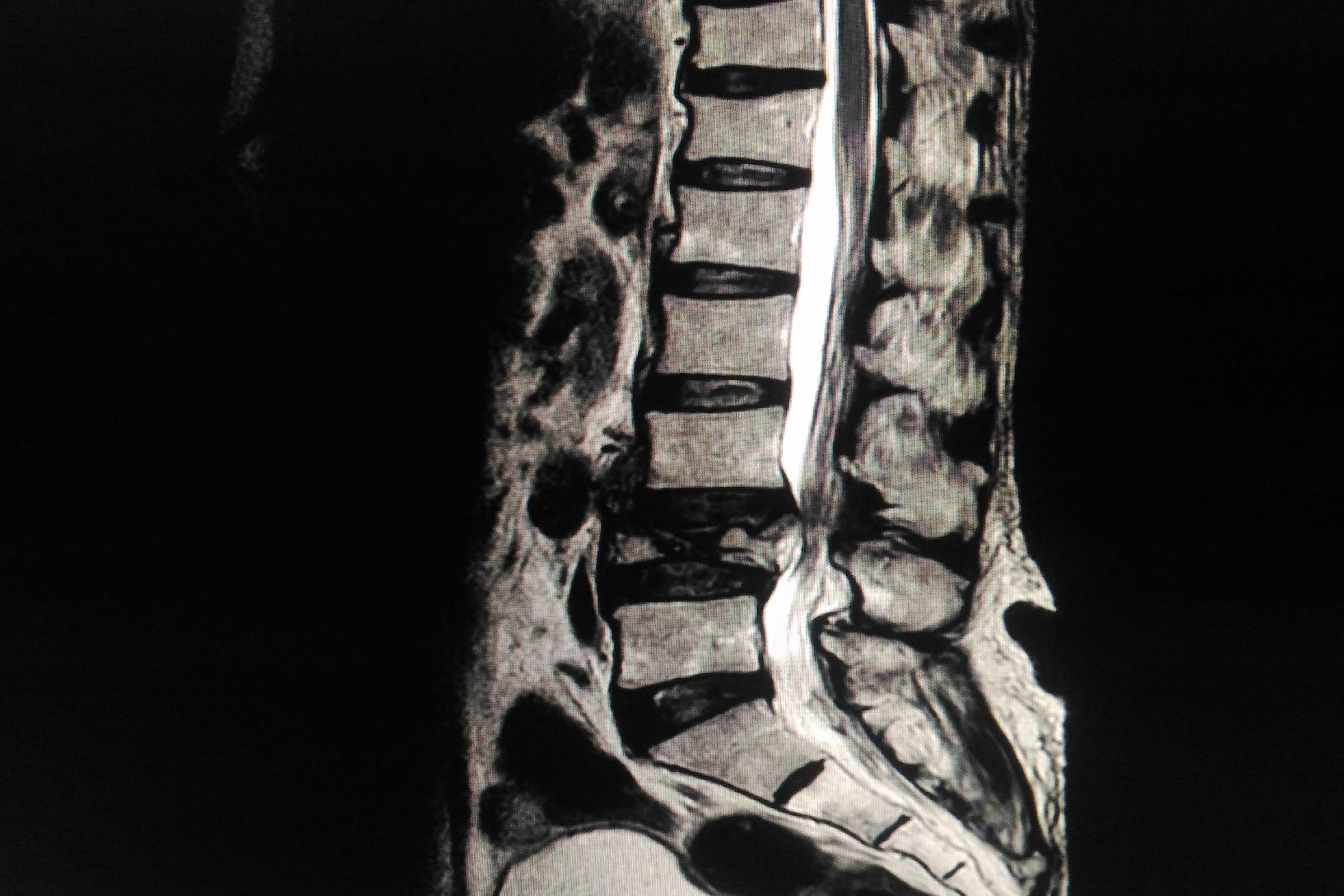 More than 2.7 million people—including Dan Reynolds, a multi-platinum, Grammy Award-winning recording artist and lead singer of Imagine Dragons—live with the pain and stiffness of an inflammatory form of arthritis in the spine. It’s called ankylosing spondylitis or AS (pronounced ank-kih-low-sing spon-dill-eye-tiss), and it’s an autoimmune disease: This means that your own immune system attacks healthy tissues; in the case of AS, the target is your lower spine. Low back pain and stiffness are the hallmarks of AS, but they may not be the first or the only symptoms you experience. “AS is not an easy diagnosis in many patients since the onset can be gradual and symptoms subtle,” says David Stephen Pisetsky, MD, PhD, a professor of Medicine, Rheumatology, and Immunology at Duke University Medical Center in Durham, North Carolina. “The diagnosis is often missed and symptoms ascribed to other causes.” There are clues that can help you and your doctor make an AS diagnosis. They include:

When you overdo it at the gym and pull a muscle, your back will usually complain and remain stiff for a few days or a week before clearing up on its own. That’s not the case with AS. The pain tends to involve the sacroiliac (SI) joints at the base of your spine (where your spine meets your pelvis) and usually lasts for at least three months, according to the Spondylitis Association of America. There may be quiet periods with little to no pain that are followed by flares when AS symptoms get more intense and new problems appear.

People with AS are extremely stiff like the Tin Man in the Wizard of Oz, explains Suleman Bhana, MD, a rheumatologist in Middletown, New York. For the launch of a new AS awareness campaign, Monster Pain in the AS, Dr. Bhana also pointed out that the stiffness usually starts in the lower back and buttocks and can spread up the spine and into the neck. “Stiffness is usually worse during the morning,” he says.

Your spine isn’t the only joint AS will target: Other joints such as your hips, ankles, elbows, knees, shoulders, fingers, and even jaw may suffer. “With AS, the joint involvement is not symmetrical like it is with rheumatoid arthritis and lupus,” he says. “It may be one ankle and not the other, or two fingers on one hand and none on your other hand,” Dr. Bhana explains. Not all types of arthritis are alike. Here are 10 types of arthritis you could have—and how to tell the difference.

AS can force your spine to fuse into a fixed, hunched position. “One of the first things a rheumatologist will do is measure your spine and neck to better track the disease process,” Dr. Bhana says. Early diagnosis and treatment can hopefully prevent this fusion from occurring in the first place.

AS is an inflammatory disease so if you have it, you’ll likely have markers of inflammation in your blood. These include C-reactive protein (CRP) and erythrocyte sedimentation rate (ESR). If these markers are elevated it tells your doctor that your body is fighting inflammation, but it doesn’t provide much more detail. There are many non-AS related reasons for high CRP or ESR. But “if there is no measurable inflammation in your blood, your back pain is likely not a result of AS,” Dr. Bhana says. 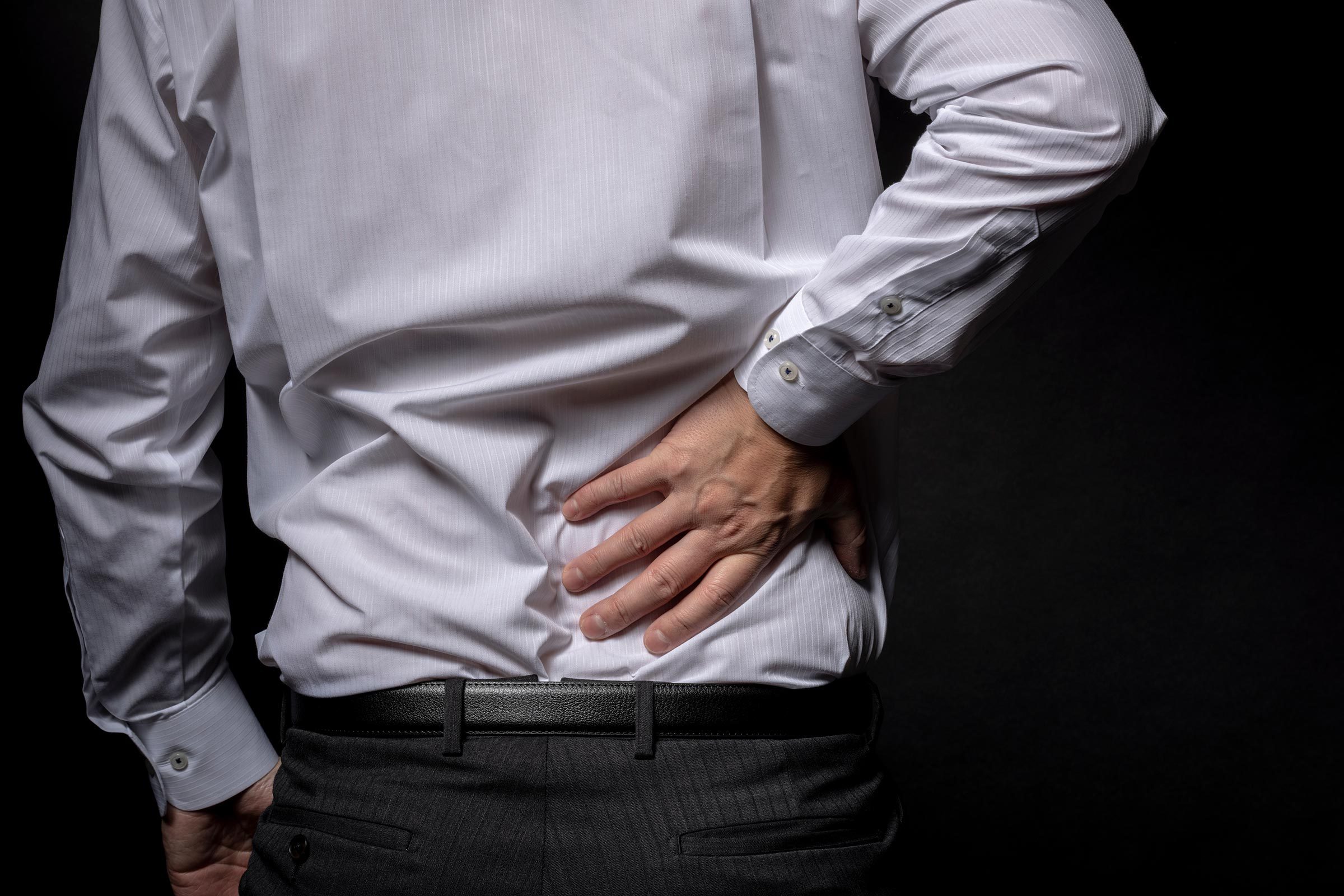 AS does have a genetic link—possibly due to the presence of the human leukocyte antigen B27 (HLA–B27) gene. If you test positive for HLA-B27, you may develop an autoimmune disease like AS—but this is not written in stone. Many people have the HLA-B27 gene and don’t have AS. It’s just another clue that points toward a possible diagnosis.

It’s not only draining to live with AS, but the pain also interferes with your sleep, Dr. Bhana says. There’s actually a long list of diseases that are linked to poor sleep, including chronic pain disorders like AS. “The inflammation can also cause fatigue as your body must use energy to try and fight the inflammation,” he explains.

AS strikes men and women between the ages of 17 and 45, according to the Spondylitis Association of America. “Things that raise concerns about AS include back pain and stiffness in the morning with no injury history, especially when stiffness lasts for 45 to 60 minutes or more in a person younger than 40,” says Eric Matteson, MD, MPH, Emeritus Chair of the Division of Rheumatology at Mayo Clinic in Rochester, MN.

Unlike traditional back pain—such as that from a bulging disc or a muscle pull—AS-related back pain feels better when you move around and worse with rest. “It’s called the gelling phenomenon,” Dr. Bhana says. “Activity gets your joints loosened up, kind of like antifreeze does for your car’s radiator.”

As many as 40 percent of people with AS may experience inflammation of the eye, according to the Spondylitis Association of America. Other eye symptoms may include painful, watery eyes, blurred vision, and sensitivity to bright lights. “This is sometimes the symptom that leads to an AS diagnosis,” Dr. Bhana says.

Inflammatory diseases tend to travel together, Dr. Pisetsky says. Many people with AS may also develop symptoms of inflammatory bowel disease such as Crohn’s or ulcerative colitis. The connection could be due to the underlying inflammation or the IBD could be a side effect of the nonsteroidal anti-inflammatory drugs (NSAIDS) that many people take to treat AS pain and inflammation, he explains. Besides inflammatory bowel disease, a history of the skin disease psoriasis could also raise suspicion that your back pain is caused by AS, he says. (Autoimmune diseases are on the rise, and young women are most at risk.)

With AS, there can be pain and tenderness in areas of the body where soft tissue meets bone, such as the Achilles tendon at the back of the heel and the plantar fascia at the base of the heel, Dr. Pisetsky explains. The medical term for this is enthesitis, and it could tip doctors off that your back pain is related to AS, he says.

If these signs have you worried you may have AS, the best and only way to know for sure is to schedule a visit with a rheumatologist. Your doctor will do a thorough physical examination of your joints and spine, and order imaging tests and blood tests; this information will help make a definitive diagnosis. In general, treatment involves medication to reduce pain and stiffness, including NSAIDS. Sometimes, biologic drugs that can stop the inflammatory cascade will be an option. Regular exercise, clean eating, stress reduction, and getting good sleep can also make a big difference in your pain and stiffness. Just be sure to watch for 7 signs that your back pain is actually an emergency.