Are Sleepy Pilots Risking Your Life?

The last thing any traveler wants to imagine is an exhausted pilot at the helm of their plane at 50,000 feet.

However, more than two dozen accidents and over 250 fatalities have been chalked up to pilot fatigue in the past 20 years, according to the National Transportation Safety Board. Recent ABC News investigations showed current and former pilots missed radio calls, entered incorrect readings in instruments, and even fell asleep in mid-flight.

The NSF survey results come about two months after the Federal Aviation Administration issued an overhaul of rules to ensure that pilots are well rested. Under the old guidelines, pilots could work 16-hour days or longer and had only eight hours off between shifts (which included time to get to a hotel, sleep, eat, dress, and return to work), according to USA Today. The new rules require 10 hours off between shifts, which must be 14 hours or less, with actual flight time limited to eight or nine hours.

However, the new FAA rules don’t go into effect until January 2014, meaning there’s still potential issue with sleepy pilots. Also, critics of the new guidelines claim that they fail to address the controversial subject of pilots’ commutes to work—a significant potential contributor to their fatigue. According to USA Today, long commutes are often an economic necessity for pilots because low salaries make it difficult to live near big commuter-hub cities.

A Look at Your Risk on the Road

You may not be able to do much about sleepy pilots, or bus or truck drivers, but you can watch your own drowsy driving habits. Every year 1.9 million drivers have a fatigue-related crash or near-miss, according to Mark Rosekind, PhD, member of the National Transportation Safety Board—which can be as lethal a habit as driving while intoxicated. Tips to keep alert:

Get enough sleep before you drive. Data from the University of North Carolina Highway Safety Research Center found that sleep-related crashes were more likely among those who get less than six hours of sleep each night.

Watch for these warning signs: Difficulty focusing, frequent blinking/heavy eyelids; trouble keeping your head up; drifting from your lane; inability to remember the last miles you drove; yawning repeatedly; and feeling restless, irritable, or aggressive.

Plan for driving breaks (every two hours or 100 miles). Even if you don’t feel tired, take a nap or guzzle some coffee. Keep in mind it takes 20 minutes for caffeine to jumpstart your system.

Don’t count on music or fresh air to wake you up. Rolling down the window or cranking up the radio help, but only for 10 minutes.

Don’t go it alone. Drive with someone else for long distances so you can trade places behind the wheel, and catch each other if you’re drifting off. 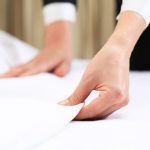 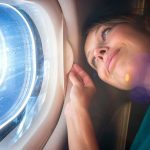