The government didn't even acknowledge it until a few years ago.

From the outside of Area 51, security doesn’t look as tough, but the site is such a well-kept secret that the government didn’t even admit it existed until 2013, when 1992 documents about the U-2 reconnaissance program were released. The mystery around the Nevada military base has sparked rumors that the government uses the remote desert area to house crashed UFOs and do lab tests on aliens. (Check out these 6 chilling stories from celebrities who claimed to see UFOs.)

Of course, it’s all just speculation, because the site is extremely restricted, and the lucky few who have stepped foot inside promise not to share any secrets. But what we do know about this location does give us some insight on how badly the military want (or need) to keep their goings-on under wraps.

Approaching Area 51, you’ll see ominous signs warning uninvited guests that trespassing could lead to a $5,000 fine and six months in prison. Photos aren’t allowed on the site either, and even airspace is restricted except for Area 51 aircraft. 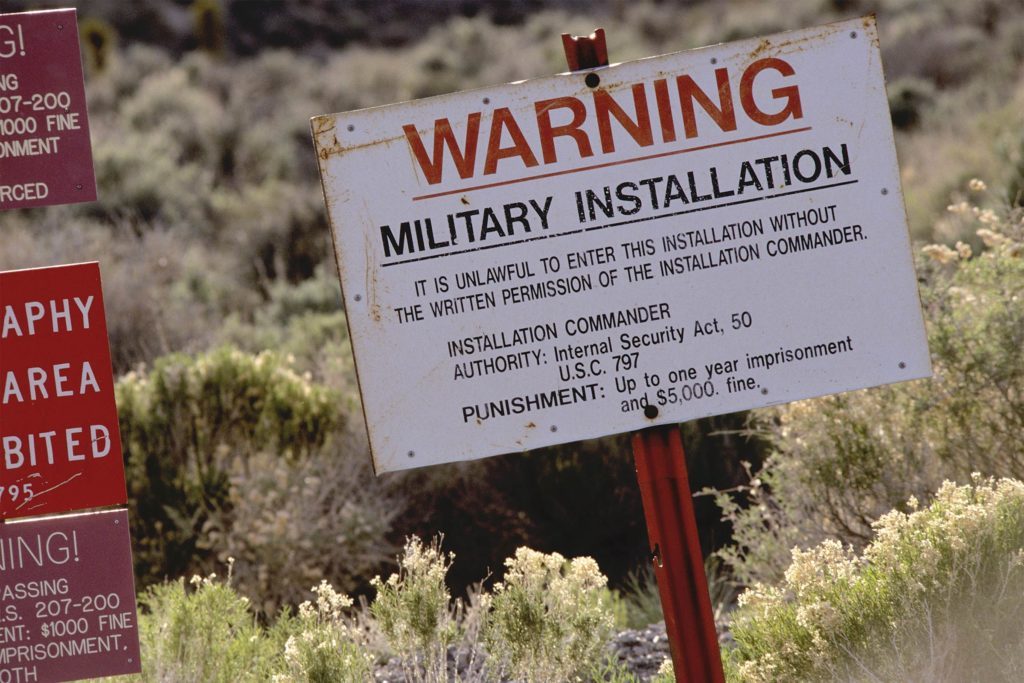 The CIA even refused to release pictures of the base astronauts inadvertently took from space in 1974, stating there were “specific instructions not to,” according to documents released later. Public satellite images—like ones from Google Maps, which allows you to zoom—can give a surprisingly close look at Area 51, though they won’t give much insight about what’s going on behind closed doors. (We wonder if it could have anything to do with the star sending radio waves to Earth that’s confusing scientists.)

Other than the warning signs, you actually wouldn’t notice much guarding the base, just a chain link fence and a boom barrier, according to Popular Mechanics. Most of Area 51’s protection comes from the sheer vastness of the desert surrounding the base. The restricted area is 4,687 square miles, making it three times bigger than Rhode Island, according to NPR.

Still, cameras keep an eye on every visitor, and local legend says sensors in the ground are sensitive enough to know the difference between an animal and a trespassing human. Meanwhile, Atlas Obscura reports that armed guards patrol the area in pickups.

Even for the lucky guests who do get invited to Area 51, heavy security clearances don’t mean they get an unbridled view of the grounds (likely including anyone with this real NASA job that protects Earth from aliens). Most visitors arrive on “Janet Airlines” that fly in from Las Vegas. The window curtains of the unmarked planes are drawn when they arrive, according to Annie Johnson in Area 51: An Uncensored History of America’s Top Secret Military Base. Talk about keeping secret. (Whether you’re in a Janet or a regular flight, don’t miss these 18 things you should never do in an airplane.)

With all the hush-hush, it’s easy to see why rumors of aliens and other outlandish lab stories suddenly seem convincing. After all, a surprising number of Americans believe in aliens. UFOs or not, the secret just makes us more curious about what Area 51 is hiding.

Disclosure: This post is brought to you by Reader’s Digest editors, who aim to highlight products and services you might find interesting. If you buy them, we may get a small share of revenue from our partners, such as Amazon Services LLC Associates Program. We frequently receive products free of charge from manufacturers to test. This does not drive our decision as to whether or not a product is featured or recommended. We welcome your feedback. Have something you think we should know about? Email us at [email protected].