When Their Baby Chickens Were Stuck in a Snow Storm, This Mom Came to the Rescue in the Most Heroic Way

Kids cheer on their hero mom as she saves the family's chickens from a blizzard.

The saving of Miss Penni, our beloved hen, took place many years ago, but sometimes it seems like yesterday.

It was a cold winter. The wind howled wildly all night across the back 40. The snow was blinding, and we couldn’t see much from the house as we looked toward the fenced-in pasture. When morning came, my three small children and I got up and donned warm socks, slippers, robes, long-sleeved shirts, blankets and whatnot and made our way to the windows facing north. The wind blew hard from the west, and the snow made it hard for us to see the henhouse.

As we peered out the window, narrowing our eyes and adjusting to the whiteout, we saw that the henhouse was gone. Miss Penni and her two friends had been blown away by the cold northwest wind that still rattled our old farmhouse.

I let my imagination race for a moment. It felt as though we’d traveled back in time to the early 1800s, and a great storm had upset our delicate balance in the dead of an Illinois winter. We would need to go outside, pump the water, slop the hogs (we didn’t have any), or make a trek out to the famed outhouses of long ago. I shook the fantasy off and came back to reality. I looked at the emptiness outside to make sure I wasn’t missing something.

Then I saw it. No, I saw them — all three chickens — perched around the rim of a white 5-gallon bucket. I couldn’t believe my eyes! How was this whipping, violent wind not dashing them into the field beyond? A miracle, I thought.

I threw open the back room closet door and pulled on my husband’s long snow pants and heavy winter coat. I pulled the hood up, wrapped a yellow-and-black scarf around my neck and stuck my feet into Roger’s very large boots.

I hollered at the northwest wind as it swept across my beloved land. I was the spirit of Little House on the Prairie, and Pa wasn’t with me! I was alone, save for my children. They stared out the north window into the vast white sea of snow, their eyes peeled for any sign of movement.

Outside I heard the crunching of my boots as I walked against the wind. This wind was raw, as Grandpa always described it in the winter. Pushing my way forward to the white, almost invisible bucket was difficult.

As the snow swirled around me, I steadily made my way to the soft cluck-cluck-cluck sound my hens always made. When I reached them, I saw that their little feet were firmly clutching the rim of the bucket, heads bent forward and away from the paralyzing wind.

Absent was their usual fluttering of wings and their fear of man, beast or any other creature. They were hanging on for dear life, and fear didn’t matter anymore. It was trust me or freeze to death. I quickly unzipped Roger’s heavy coat, gently lifted each hen and stuffed it carefully into the warm inside. I tried not to squash them. They cooed softly. After I had all three warming up inside my coat, I began the freezing walk back to the small shed directly behind our house.

The doors to the shed were difficult to open, but somehow I managed to pull them apart. One by one I laid my chickens on the cold floor, and they began to cluck softly. I found straw and scattered it inside the shed. My hens were going to make it!

As I shut the shed doors, my eyes went directly to the window where my children were watching. They jumped up and down, cheering for me. If Roger’s coat had had buttons, every one of them would have popped off simultaneously at that moment. As my children whooped it up inside, I whooped it up outside!

I wasn’t some dragon slayer from a fairy tale. I was simply a mom, but the look on my children’s faces told me that they thought I was a hero mom. 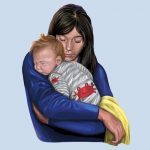 A 4-Week-Old Baby Was in Desperate Need of a Home. The Couple That Took Him in Knew He Was Meant to Be Theirs.