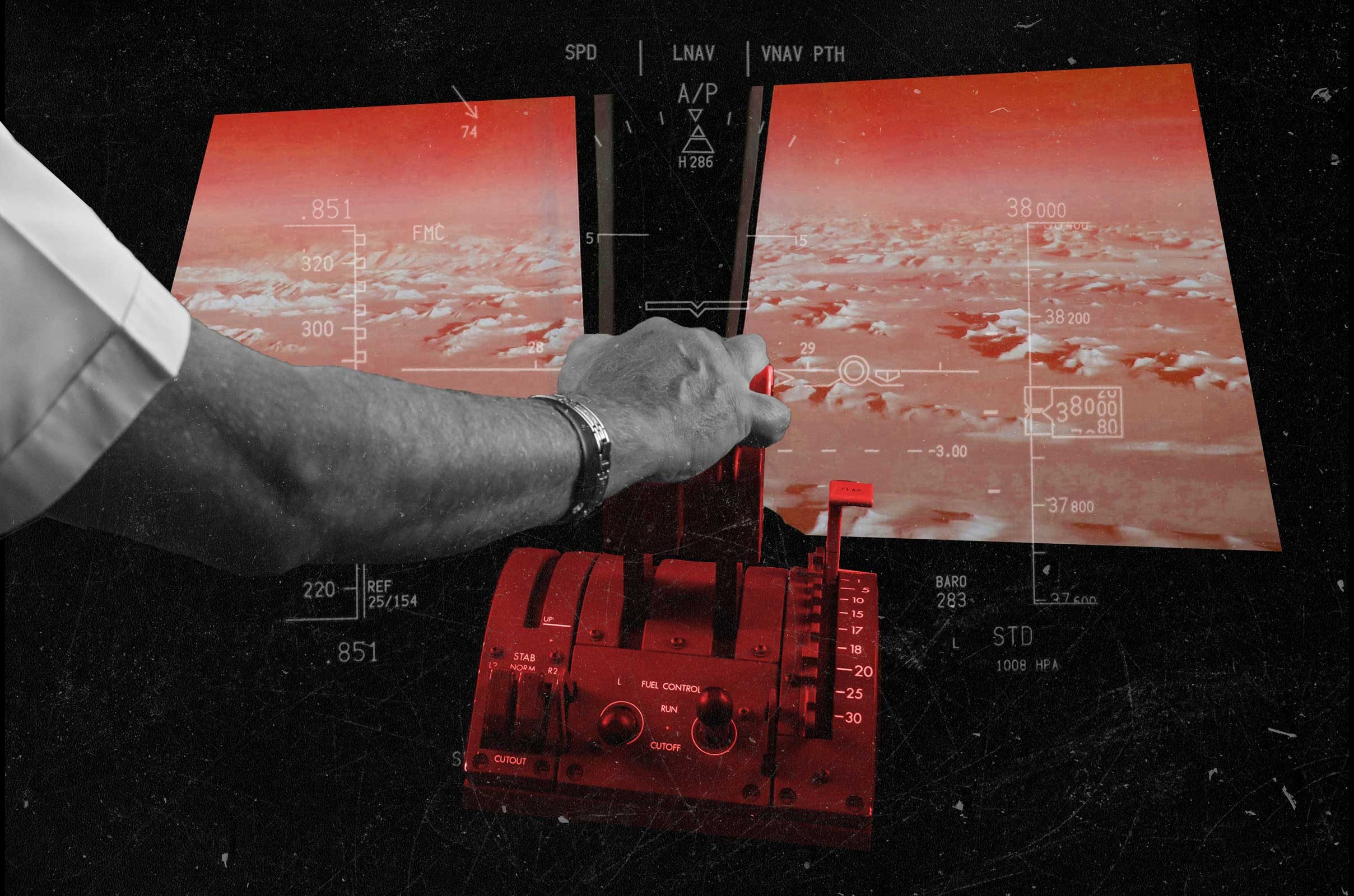 The pilot faced a desperate choice: stay with his crippled jet and die-or get out and turn loose a flying bomb.

One by one, out of a high blue Colo­rado sky, the four A7 jet attack­ fighters came in for their final strafing run last August 28. Leveling off 100 feet above ground, they thundered down the Fort Carson bombing range with cannons blasting.

Maj. Thomas Goyette, 38, piloting the fourth of the swept-wing jets, squeezed off his remaining 50 rounds, then pulled up into a steep left climb to rejoin his flight.

“Thirty-one hits for you, number four,” a tower controller reported on the radio. It was good shooting, appropriate to the renowned marksmanship of the “Red­ eyes,” the 120th Tactical Fighter Squad­ron of the Colorado Air National Guard. Goyette smiled.

At 2,500 feet, he tightened his right hand on the control stick and tried to push it forward to get the plane’s nose down. The stick wouldn’t budge. With both hands, he pushed harder. Still no response. The A7 was now bolting skyward at 350 m.p.h.

“Hey, I’ve got a flight-control prob­lem,” Goyette announced over the radio. The other pilots, all majors in their late 30s, turned in their cockpits for a visual check. Flight leader David Gaw and his wingman Scott Ralston be­gan to circle at a distance. John Pratt, Goyette’s wingman, edged in tight for a closer look. Here’s how to survive a plane crash, according to science.

Goyette suspected a malfunction in the automatic flight-control sys­tem. No problem. He would han­dle the plane manually. “Ease back, John-boy,” he warned Pratt as he flipped the automatic flight-control switch to disconnect the system. The A7 immediately pitched vio­lently upward to the right, then went into a barrel roll with the plane, almost upside down, diving toward the ground. Thrust back in his seat by gravity, straining to move the stick, Goyette flicked the microphone switch. “Stick’s fro­zen!” he called.

Gaw watched in alarm as the aircraft plunged into the purple shadow of the mountains. Diving in hot pursuit, Pratt shouted, “Bail out, Tommy! Eject!”

The words cut into Goyette’s brain. But his altimeter needle was registering below 1000 feet. Too late! If he ejected now, the rocket release would drive him into the ground. I’m going to die, he thought.

In a desperate, last-second reflex, Goyette pushed in full right rudder and watched in near disbelief as his plane rolled around and the ground began to give way to sky. Miracu­lously, his plane was upright again, and climbing. Goyette felt the knot of terror case in his stomach as he re-engaged the flight-control switch and continued in a rapid ascent.

The pilots talked back and forth, trying to figure out what was wrong. They were an impressive group: Davey Lee Gaw, a high­ ranking engineer for a defense contractor in civilian life; Scott Ralston, a Vietnam combat veter­ an and investment banker; John Pratt, a dentist; Tommy Goyette, a Boeing 727 captain for Continental Airlines. Though each had flown turbofan-jet A7s for more than ten years, and Goyette himself had been an instructor in the plane, no one had any solid answers. Perhaps the plane had been damaged by a ricocheting shell from the strafing run. But Pratt, bearing in once again, reported no sign of bullet holes.

Now at 10,000 feet, the aircraft continued in its relentless climb. Goyette tried once more to turn off the flight-control switch and achieve manual control. Again, the aircraft snapped to the right, rolled on its back, and twisted into a dive. But the earlier experience had taught Goyette to use the rudders, and he was able to regain some control well clear of the ground.

Because landing a plane in this condition seemed out of the ques­tion, Gaw and the others expected Goyette to eject at the right mo­ment. But Goyette himself was thinking that to eject would be to turn loose a flying bomb. The A7 would eventually crash some­ where, perhaps in a playground or on a home. Never could he live with that on his conscience. His thoughts went to his wife, Jan, and their three young children. I’ll stay with the aircraft, he resolved. No­body goes with me.

His one thin hope was a retractable, horseshoe-shaped hook at the back underside of the aircraft. By rolling level near the ground and dropping the hook, he could at­tempt to snag a runway barrier cable in the same way that landing planes are “caught” on aircraft car­riers. Most military fields had such cables at the ends of runways for emergencies.

When Goyette told Gaw that he would try for a barrier landing, the flight leader reminded him that the nearest cable was back at their home base, Denver’s Buckley Field, 8o miles away. The three sound A7s then began shepherding the crippled plane northeastward, away from the heavily traveled in­terstate and the cluster of towns in the lee of the Rocky Mountains. These are things your pilot won’t tell you.

With the A7 lurching this way and that, Goyette struggled toward Denver for 20 minutes, banking and rolling between 3,000 and 7,000 feet. On the way, he tested his wing flaps, landing gear, and cable hook. All worked.

The A7’s normal touchdown speed is 150 m.p.h. The trouble, Goyette had discovered, was that he couldn’t decelerate under 200 m.p.h. without the jet tossing out of control. Cable or not, Goyette’s comrades thought he had scant hope of landing the wildly erratic craft.

The supervisor drove a radio­ equipped truck to the south end of the runway, then Goyette briefed him. “Let’s try one approach, Gor­do,” the pilot suggested. “If it doesn’t work, we’ll figure out what to do next.”

Goyette, fearing a crash might close down the airfield, directed Gaw, Ralston, and Pratt to land first. Then Goyette came straight at the south end of the runway, hook trailing and wings waggling. Three­ quarters of a mile from the cable, which was strung three inches above the concrete, the pilot ma­neuvered down to 300 feet and throttled back to 200 m.p.h. For a moment, Gordon thought it might be a good catch. But suddenly the plane floated up. It was over-shoot­ing. “Go around!” Gordon snapped into the radio.

Goyette pushed the throttle to full power. The A7 went berserk. The nose kicked aloft, slicing around to the right. Rolling over, the plane charged at the cluster of jet fighters by the control tower.

Barely breathing, his throat con­stricted, Goyette jammed his boot hard on the left rudder. The plane flipped left and headed toward the huge dark mouth of a hangar. It flashed through Goyette’s mind that he was a split-second away from death. But there was no paral­ysis in the terror. His feet played the rudders; his hand was lightning quick on the throttle. Gordon in his truck and the pilots in their parked planes watched in horror as Goyette’s fighter screamed across the field, 100 feet high, landing gear pointing toward the sky. You’ve just killed yourself, Tommy, thought Ralston.

Short of the hangar, Goyette rolled the aircraft right and went into a long, shallow run for the ground. Here’s what happened when a lone survivor of a plane crash found himself lost in the freezing Alaskan woods.

“Enough, brother, blow it!” Ral­ston yelled into the radio. The watchers prayed for the canopy to shoot off. With the plane at 50 feet, Gordon thought, It’s all over.

Desperately, Goyette stomped on the rudder. The wings and nose responded and he was up and away, banking around to the cast, climb­ing to 2,000 feet.

“I’m going to have to come in at over 200 knots (230 m.p.h.),” Goyette announced. His voice was calm and he felt a surprising strength in his muscles. For nearly 40 minutes now he had been riding this unguided missile. Although professional judgment told him he could not get the plane down safely, an unreasoned, almost spiritual conviction welled inside him. “I’d get everyone out of the tower,” he radioed, worried that the jet might swerve to the right again. “I don’t think this thing is going to land.”

The pilots taxied their fighters to the other side of the airfield. The controllers took cover behind walls at the foot of the tower.

Goyette remembered his life in­surance was paid up, and his will was written. At peace, prepared to face death, he committed to his final approach. He would either land the plane or crash it where it would not harm anybody else.

“I’m coming around again and I’ll be hotter than fire,” he called to Gordon.

The jet came through the twi­light as if caught in a buffeting gale, the nose bobbing up and down, the wings rocking. But the effect of the higher speed with wheels and flaps down had overcome the pitching and yawing. At 100 feet, the plane rolled left, then right. At Goyette’s rudder correction, the wings snapped level and the wheels came down on the runway. Too fast! Goyette knew. The plane bounced back into the air.

When the wheels hit a second time, Goyette danced his feet on the rudder pedals; keeping the A7 straight, aiming it down the 10,000-foot runway: 180 m.p.h…170…160… At 130, his wheels bumped over a heavy steel cable. Instantly, he was thrown forward in his seat. He had a catch! The restraining cable whirled off the drums behind him. Now, running out of concrete, he jumped on the brakes.

As the plane stopped on the last yard of runway, a fire truck screeched alongside. The radio was a hubbub of voices. Ralston’s was unmistakable. “Neatest flying I’ve ever seen!”

Goyette shut down the engine and raised the canopy. Slowly, white-faced and trembling, he climbed down to the ground.

“Dear God, Gordo, what a ride,” he croaked as his flight supervisor ran up.

After a debriefing, Davey Gaw followed Goyette home and went inside to make sure he would be all right. Cori, 10, his older daughter, was waiting in her pajamas at the bottom of the stairs. Wordlessly, the father enveloped her in his arms and held on, his face pressed into her neck and his tears dampening her hair. Now read this story about a man who survived 438 days stranded at sea.

Air Force mechanics later discovered that a thumb-size, metal electrical connector had broken away from the center beacon light on the backbone of Goyette’s aircraft. The device lodged between bolt heads of the rods linking the control-stick assembly to the tail section, jamming the linkage. A ”high accident potential” report was circu­lated to all Air National Guard wings, and repairs were made on many A7 beacon lights as a result.

In tribute to Goyette’s skill and heroism, his squadron nominated him for the Distinguished Flying Cross.

This article originally ran in February 1987 of Reader’s Digest. 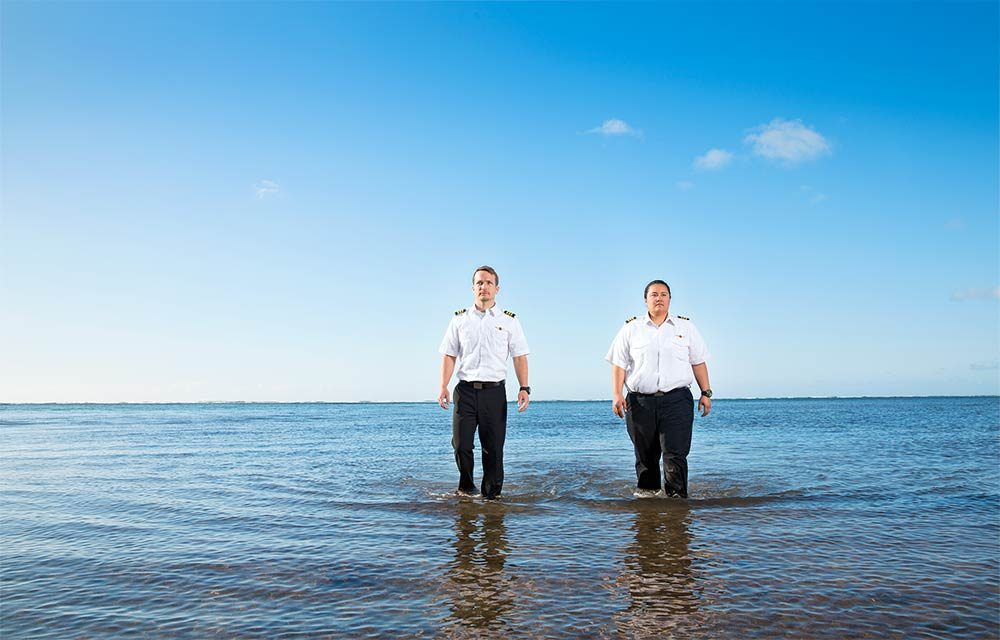 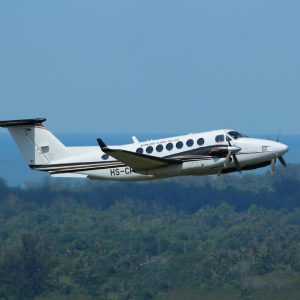 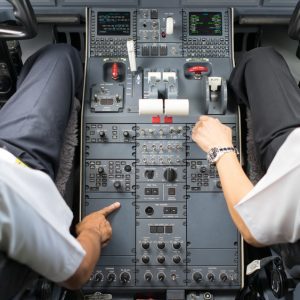 Scariest Moments Pilots Have Experienced on the Job 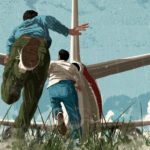 Alone on the Top of a Mountain, This Wife Had to Carry Her Injured Husband Back to Safety After a Serious Fall