Out of 7 Frozen Pizza Brands, This Is the Best One 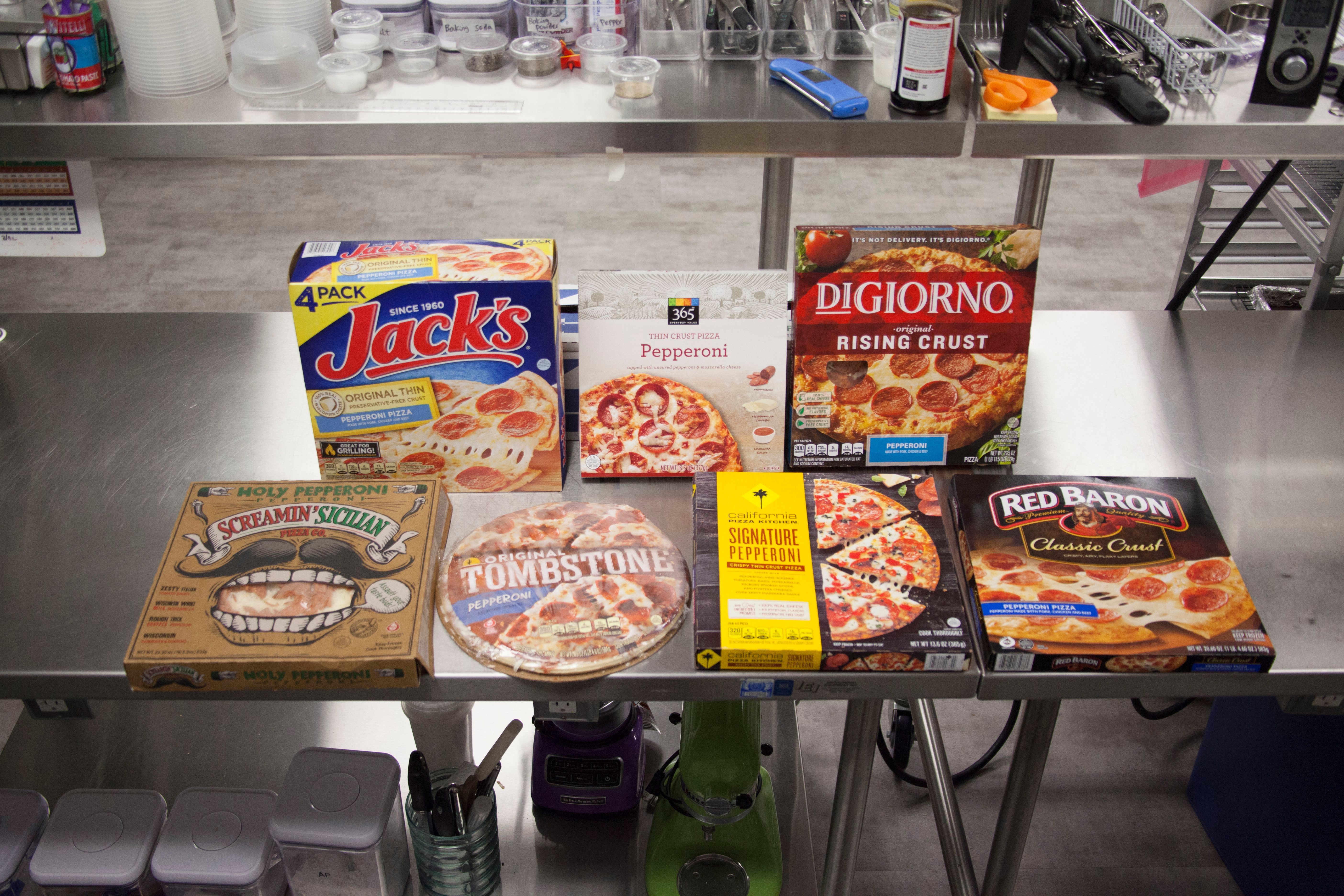 On a busy night, there’s nothing easier than popping a frozen pizza in the oven. Crispy, cheesy and packed with pepperoni, you can’t go wrong. I mean, you know the saying: There’s no such thing as bad pizza.

Or is there? Taste of Home, a sister brand of Reader’s Digest, recruited a handful of taste-testers for the difficult task of sampling a pizzeria’s worth of pepperoni pies. While they acknowledged that these wouldn’t live up to the homemade variety, they also knew that a frozen pizza after a long day (or night) can really hit the spot. So they grabbed seven different brands to try. Would the usual suspects—Tombstone, Red Baron, and DiGiorno—prevail, or would choice options like California Pizza Kitchen or new-comer Screamin’ Sicilian be worth the premium price? Read on to see which pizza had them going for an extra slice. If you’re up for making your own, here are the top 10 pizza recipes you should try.

At the very bottom of the list was a pepperoni pie from California Pizza Kitchen. Taste of Home had high hopes for this brand since many of their taste-testers were fans of the restaurant, but it didn’t quite live up to its name.

Out of the oven, you could tell straight away that the pizza was different than the rest: Diced tomatoes and generous flecks of basil dotted the pizza in addition to the pepperoni. The testers all agreed that this pizza looked the most appetizing, but once they dug in they were disappointed by the taste. The crust was overly thin, there wasn’t enough pepperoni to satisfy appetites, and the sauce was bland and ketchup-y. As for those pretty tomatoes and basil? They didn’t taste fresh and the testers all agreed that these additions took away from the overall flavor. If you do opt for delivery, here are 27 things your pizza guy won’t tell you.

Jack’s ranked slightly better than California Pizza Kitchen. This frozen pizza was a slumber party classic for many testers, but ultimately it didn’t taste as great as everyone remembered. While the tangy sauce was notable, the cracker-like crust and greasy pepperoni didn’t earn any pizza any points. The testers agreed: This was the quintessential cheap, frozen pizza.

“This is nothing special.”

Scoring fifth in the test was the classic Tombstone pizza. This pizza looked a little more substantial than our lower-ranked slices, and it had the perfect sauce-to-crust ratio. But the thick crust was almost too thick. Testers compared it to chunky cardboard. And the pepperoni, which had a distinct caraway flavor, left us longing for even more spice. If you’re bored of pepperoni, here are 11 new crazy pizza toppings you won’t be able to resist.

“This is a typical frozen pizza.”

Barely nudging out Screamin’ Sicilian for the number three spot was Red Baron’s classic thin crust pizza. Many of the reviewers remarked that this is exactly what they expect from a frozen pizza, though that didn’t mean the pie was a favorite. The crust was fairly bland (though it crisped up nicely in the oven) and it was topped with an ordinary, under-seasoned red sauce. The pie’s saving grace was its tasty and spicy pepperoni—the reviewers just wished there was more.

“This tastes like bowling alley pizza, which is fine … if you’re bowling.”

Coming in right in the middle was Screamin’ Sicilian’s pepperoni-packed pizza. The box boasted zesty tomato sauce, thick-chopped pepperoni, and real Wisconsin cheeses. It had to be good, right?

Well, the testers definitely noticed the bold tomato sauce laced with a light Italian seasoning blend. And when it came to the pepperoni, we were thoroughly impressed. This pizza piled on more toppings than any other we tried, and we all loved how the chopped pepperoni slices crisped up in the oven. But what about this brand’s third claim to fame, the cheese? That’s where this pizza fell flat. They found the cheese to be bland and the overabundance made the pizza a bit greasy. Here are 36 other frozen foods to go with your meal.

“For a thick crust pizza, it’s not dense at all.”

Second place goes to DiGiorno Original. This delivery-style pizza was the only rising-crust option and it definitely rose above most other brands we tried. Immediately the crew of taste-testers made note of the thick, chewy crust. While the crust looked doughy and heavy, they were pleasantly surprised at how light it was. The only drawback was that the crust had a bit of a sweet flavor, which wasn’t well-received.

When it came to toppings, the cheese, sauce, and pepperoni all got good marks for taste, but they felt there wasn’t enough of them to balance out the thicker crust. A side of marinara for dipping would have made this pizza perfect.

“I’d be the spokesperson for this pizza.”

At the top of our list: Whole Foods 365 Everyday Value pizza. Our testers were shocked when this store-brand pie was unveiled. How could generic taste so good?

What set this pizza apart? It’s perfectly seasoned. The sauce was blended with oregano, garlic, and basil. As one tester put it, “There’s a lot more going on here than pepperoni.” But what really pushed this pizza to the No. 1 spot was its irresistible crust. Crispy, golden, and just a little thicker than a normal thin crust, it tasted like it had been brushed with garlic butter. This added another dimension to an already flavor-packed pizza. When it came to this one, there were no leftovers.

To recap, here were the rankings, from the favorites on down: Whole Foods 365 Everyday Value, DiGiorno, Screamin’ Sicilian, Red Baron, Tombstone, Jack’s and California Pizza Kitchen. Take your frozen pizza to the next level with these 10 incredible frozen pizza upgrades.

Make Your Frozen Pizza Even Better

When the results of this blind taste test were unveiled, everyone was stunned. A premium brand at the bottom? A store brand at the top? Classic, budget, and choice brands mixed in the middle? There was no correlation between taste and price or brand recognition. This makes for an unpredictable pizza-buying experience, but that’s why we’re here to help! Here are 10 frozen food myths you need to stop believing.

It’s all about the ratio

Pizza after pizza, one piece of judging criteria became critical: the ratio of crust to sauce to cheese to toppings. When it came to the lowest-scoring pizzas, the too-thin crust was an issue for the testers. How could a cracker support all the other ingredients? And when it came to DiGiorno, our number two pick, the lack of cheese and sauce is what cost it the crown.

It’s not the real deal

Although we definitely found some new favorite brands for busy nights, we all agreed that none of these pies lived up to our perfect-pizza expectations. Any way you slice it, a frozen pizza is a frozen pizza—it will never taste like delivery. Next, check out these healthy pizza toppings to try for your next pizza night.

78 of the Best 4th of July Sales You Won’t Want to Miss
33 Smart Ways to Slash Your Home Energy Bills
I Changed 3 Grocery Shopping Habits and Saved $4,800