Drilling for Laughs: Billy Crystal Goes to the Dentist

The comedian puts some teeth into a rant about oral hygiene.

I shouldn’t complain so much. Life at 65 is good. I have had one house, one wife, my real nose, my real name, and most of my teeth. And the last part is a major reason why life is pretty good. Because when you hit your mid-60s, you have to take care of your teeth. It’s a generational thing—I learned it from my 86-year-old grandmother.

Susie Gabler had perfect teeth. White beauties with no cavities. She took great care of them—always kept them by her bedside in a glass of water. The first time I saw them come out of her mouth, she was in bed, and I was sitting next to her. In the middle of saying how proud she was of me, she suddenly reached into her mouth and pulled out her entire set of uppers and lowers. Splash, into the glass of water they went, and suddenly my beloved grandma looked like an 86-year-old hockey player.

“Take care of your teeth, Billy. Take care of your teeth.” I think that’s what she said, because with her lips flapping in the breeze, she could have said, “Pass me the marble cake.” I was shocked—and slightly nauseous. It was a terrible thing for a grandson to see, even though I was 32 years old.

She lost her teeth because she never went to the dentist. Mainly because the Cossacks had killed him. None of my grandparents had good teeth. Sometimes when my grandfather was eating the Thanksgiving brisket, his dentures would be hurting so much he’d remove them at the table, keep them in his hand, and manually chew the rubbery meat until it was ground down enough to swallow. While we all watched in horror, he’d take the “chewed” meat, dip it in horseradish, put it in his mouth, and swallow it with a great sigh of satisfaction. He’d then say something inaudible, and Grandma would reply, “Don’t talk with your hand full.”

Take care of your teeth! It’s why we baby boomers should floss, it’s why we should brush, and it’s why we should go to the dentist, because we know dentists are important people, even though they weren’t smart enough to get into medical school. It’s sad; dentists don’t get the respect they deserve. You never hear, “Is there a dentist in the house?”

You would think that taking care of our teeth in 2013 would be easier than it was in 1963, but it’s not, and that’s because the whole dental experience has changed. Back then, a dentist was a one-man show. He would clean your teeth, show you how to brush, do bridges, take X-rays, pull teeth, fill cavities, drill root canals, make appointments, validate parking, and rub your leg when he thought you were under anesthesia. The only specialist in 1963 was the orthodontist, who thought his job was to ruin your puberty. Now it’s all about the specialists.

When I turned 65, I decided to celebrate by making an appointment for my cleaning. I showed up on time and read the Sports Illustrated from 2010 until the maître d’ (it’s L.A., don’t ask) escorted me to my examining room.

I’m lucky. I go to a very prominent dentist. My dentist is the fifth guy. You know when they say, “Four out of five dentists prefer” whatever it is they prefer? Mine’s the one who doesn’t. When people find out he’s the fifth guy, they go crazy. “He’s the fifth guy? What’s he like? You gotta get me an appointment!”

When the dentist came in, he asked if I’d been flossing, and, like we all do, I lied. Then he pulled a chunk of lobster meat from between my

molars. As the jazz trio played him off and he left the room, the parade of specialists began.

First it was the cleaning expert—the hygienist. She came in looking like one of the riot police in South Korea. On some people, a large Plexiglas face mask isn’t flattering. You can’t imagine the noise the tool made as she chiseled that stuff off my bottom teeth. I don’t have tartar; I have coral. That’s why dentists’ offices always have fish tanks. You could sculpt Michelangelo’s “David” out of my plaque.

Next came the X-ray technician, because God forbid the hygienist should have to do two things. The technician put a heavy lead blanket over my goodie basket and sprinted out of the room. That’s comforting. I figure with 60-plus years of X-rays, my family jewels have been covered with more lead than a kid’s toy from China.

Then the dentist came back in after looking at the X-rays, meaning that he would be charging me for a second visit. He said, “Billy, you need a root canal.”

“Oh, I don’t do them—you’ve got to see Dr. Jack Wu for that. He can see you in about three weeks.” 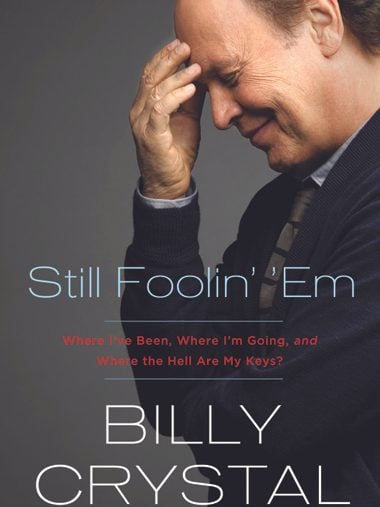 Henry Holt and Co.As soon as he’d said that I needed the root canal, my tooth started to hurt. “Three weeks of this kind of pain?” I asked.

“No, not this kind of pain—tomorrow you’ll have a worse kind of pain. I’ll give you these pills I got in Mexico. They may constipate you, and if they do, call Dr. Ari Weitzman.”

“How about my wisdom teeth?”

“Right now, they’re fine, but if you want them extracted, Dr. Abrams does uppers, and Dr. Hunter does lowers.”

“So what exactly do you do?” I asked.

“Oh, I do fillings and crowns and sit by the pool you paid for.”

I currently have six dental specialists. My dentist farms out everything. I’m looking at the pictures on his desk, and I say, “Are those your kids?”

He says, “Technically no, I didn’t handle that. I sent my wife to Dr. Feldman.”

This Dog Food Brand Sold Out Twice in Its First Month