There’s no question that the morning ritual of brewing and sipping a fresh cup of coffee is one of the small joys of life. I mean, even the process of deciding which kind to buy can be fun. But have you ever wondered what happens to your body when you drink coffee every day? Between anxiety, jitters, afternoon crashes, and a potential caffeine dependency, java can leave you feeling a whole lot of not-so-great ways. If only there were a natural coffee alternative that wouldn’t have such unpleasant side effects.

Plot twist: There is, and it’s called brewed cacao (not to be confused with cocoa, which is sweeter and usually used in baking). I was tired of all the anxiety, weird eye twitches, and sleeplessness that often followed my morning cup o’ joe, so I traded in my daily caffeine fix for Crio Bru’s brewed cacao—and I’ll never go back. If you haven’t tried it, here’s a spoiler: It tastes like rich, dark-chocolatey goodness, except it wakes you up (sans caffeine) and it’s full of antioxidants, so it’s actually better for you.

Before we get into all of the benefits of drinking cacao, we should probably give credit where credit is due. The process of brewing, roasting, and grinding cacao beans for consumption is believed to date back to the Olmecs of southern Mexico in 1500 BC. However, since there isn’t much written history on the Olmecs (besides ancient pottery featuring cacao), most of what we know about its origins comes from the Mayan and Aztec empires. The Mayans are credited with the process of fermenting, drying, roasting, and grinding the cacao beans. As cacao grew in popularity, people began treating it as a sacred beverage by drinking it as part of celebrations, offering it as dowry in marriages, and praising it as a sign of prestige.

When the Aztecs received cacao from the Mayans, they treated it with the same—if not more—respect. In fact, cacao beans ended up being one of their primary forms of currency, offered to deities, used in funerary rites, and distributed to the Aztec militia for an extra boost of energy.

So, what makes this stuff so great? Unlike coffee, which constricts blood vessels and raises your heart rate to increase blood flow, cacao is 99.9 percent caffeine-free. Instead of caffeine, cacao contains something called theobromine, which translates as “food of the gods” in Greek. Theobromine is a naturally occurring stimulant that dilates blood vessels (instead of constricting them) to increase blood flow, which gives you the same boost of energy that coffee does—except it lasts longer and doesn’t have all the nasty side effects.

Plus, it’s packed with polyphenol antioxidants and flavonoids (one of the highest concentrations in any food in the world), magnesium, and mood enhancers that promote focus, reduce stress, and improve sleep. In addition to boosting your immune system and being a natural remedy for coughs, cacao helps to lower blood pressure, prevent strokes, promote overall heart health, aid in digestion, and build strong bones.

It can improve your mood and help you lose weight

Let’s circle back around to those mood enhancers. Cacao boasts its fair share of phenylethylamine, aka the “love drug.” In other words, it contains the same chemical our bodies release when we fall in love, which improves moods and increases focus and alertness. Cacao’s naturally occurring mood enhancers don’t stop there, though. It also contains anandamide, serotonin, and tryptophan (the “bliss” chemical in our bodies, the “feel-good” chemical in our brains, and a natural antidepressant amino acid).

Still not sold? What if we told you that it can help you lose weight, too? A cup of brewed cacao can help naturally suppress your appetite and promote weight loss. (Bonus points for it being low in carbs, calories, and fat!) Plus, you don’t have to worry about it being as acidic and harsh on your digestive system as coffee is; its pH level is usually between 6.4 and 6.8 (7 is neutral).

So, we know that brewed cacao is made from, well, cacao, and not cocoa—but if cocoa is the sweet stuff, what does cacao taste like? If you’ve ever had a dark chocolate bar with a high percentage of cacao (let’s say, 55 to 80 percent), just imagine that bar melted down and mixed with some hot water (not so much that it makes it super watery, though, just enough to make its dark chocolate flavor a little less intense). Sounds pretty darn good, right?

If you’re not a fan of dark chocolate and instead tend to reach for milk chocolate in the candy aisle, you can recreate that flavor by adding milk and sugar to your brewed cacao. What makes brewed cacao so great is that you can pretty much add anything to it (hello, whipped cream!) and it’ll still taste delicious. Consider this the excuse you’ve been looking for since childhood to indulge in dessert for breakfast—if you’re into sweet things, that is. If not, skip the sugar and whipped cream and enjoy the savory dark chocolate flavor on its own or with light milk. My personal favorite way to enjoy it? Keeping it simple with a splash of oat milk.

Basically, what we’re saying is that brewed cacao is the solution to most of your problems (maybe). Even if your diet consists of keto, paleo, Whole30, non-GMO, or kosher foods, if you’re drinking 100 percent pure ground cacao beans, it’s totally compliant with each of those. Some more perks: It can be served hot or iced, and since it brews just like coffee, you won’t need to go out and buy any special equipment to enjoy a cup of this. Brewed cacao is even healthy and safe for kids to drink, especially if you purchase it from an organic brand like Crio Bru.

Oh, and if you don’t want to give up your perfectly roasted and/or flavored java, Crio Bru offers a variety of roasts and seasonal flavors like peppermint mocha, cinnamon, caramel, double chocolate, hazelnut, and pumpkin spice. Feeling overwhelmed? Don’t worry—there’s a starter kit for that! 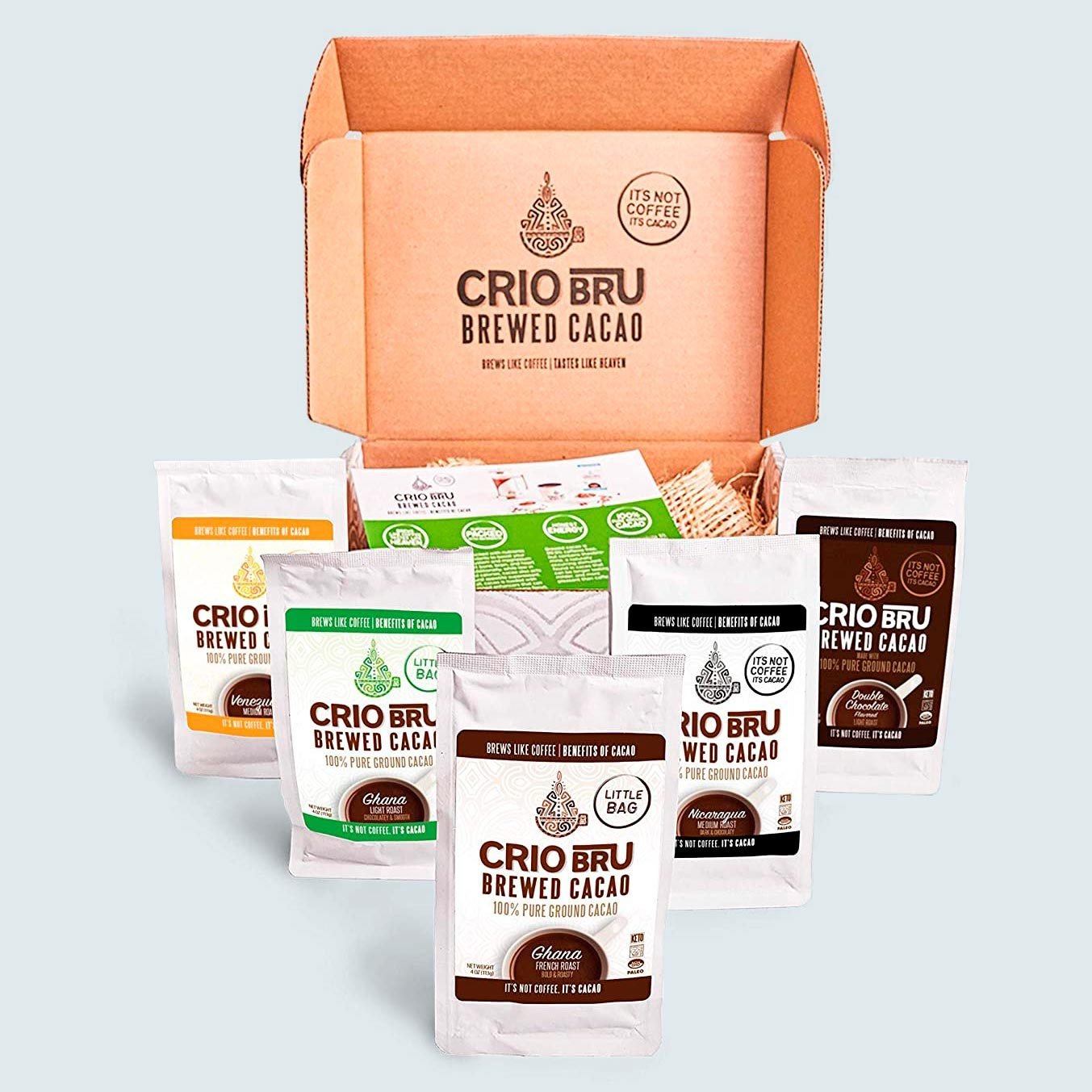 Food Gifts Everyone Will Love

The Best Gifts for Coffee Lovers

Brittany Gibson
Brittany Gibson is a regular contributor to RD.com’s culture, food, health, and travel sections. She was previously an editorial intern for RD.com and Westchester Magazine. Her articles have appeared on Buzzfeed, Business Insider, AOL, Yahoo, and MSN, among other sites. She earned a BA in English from the University of Connecticut.