This cause is simply too important to just "agree to disagree," even to keep an old friendship.

“Sweet” is one of the first words people often use to describe Nancy. Indeed, her kindness was one of the first things that drew me to her when we first met in middle school. As we grew up, she continued to be ultra nice and generous, even going so far as to start a charity when we were in college. So I was surprised when she recently began posting violently ignorant messages on social media amidst the most recent Black Lives Matter protests. In hindsight, I shouldn’t have been surprised. The signs had been there all along; I just hadn’t wanted to see them. It was easier to “let things go” or chalk up snide remarks to a “misunderstanding” than it was to recognize that my best friend since childhood had become a bigot.

Instead of discussing her true feelings, Nancy opted to avoid confrontation, allowing me to assume she agreed with me when she really didn’t. For instance, when I came out as gay about a year ago and introduced her to my partner, who is trans and had worked for Planned Parenthood, she seemed positive and I took that as support. I had been worried about what she would think; she comes from a conservative family and has never really left our hometown, so she hasn’t been exposed to many people who are very different from her. But she didn’t say anything negative, and I was grateful she was on my side.

Not long after that, though, I noticed an anti-choice post on her Facebook page that was opposed to everything my partner and I stood for. I was shocked since she’d never expressed those views to me, but I soon realized it was a pattern: She would be silent to my face, then post what she really thought online. (Experts say that avoiding confrontation is toxic behavior.)

I knew I couldn’t stay silent any longer

When Black Lives Matter exploded in late May, I immediately became involved in the protests and fundraising efforts. You don’t need to be Black or to have experienced racism personally to be horrified and angered by its pervasiveness and life-threatening effects. In my own small ways and sphere of influence, I wanted to help change things for the better, including having some difficult conversations with friends and family regarding racial justice. I knew I needed to start with Nancy.

She is currently in a relationship with her childhood friend, Steve, an ex-marine who now works as a state trooper. So, as Black Lives Matter took center stage, Nancy’s social media was filled with angry posts about “all lives matter” and pro-police, anti-BLM propaganda. She was sharing and liking posts that made cops the real victims, rather than people of color, saying things like, “The same people who are being disrespected in New York City right now are the same people who were helping those on 9/11.” Eventually, after a Black mutual friend expressed how much what she was posting hurt him, I decided I needed to say something. Perhaps she just didn’t know? Nancy always had such a kind heart, so maybe she would listen.

At the beginning of June, I sent her a breezy text, simply asking if we could talk about some of the stuff she’d been posting. I told her I was deeply concerned by her posts but that even though we obviously had different viewpoints, I didn’t want to assume anything and just wanted to explore different ideas with her. Before I could go any further, she cut me off. “No. You’re the one who is wrong—you’re the one who is being offensive,” she told me. “I have all the facts, and you’re supporting a cause that is causing more violence and mass killings than the one instance of George Floyd.” It only deteriorated from there.

She flooded my inbox with data cherry-picked to support her narrow view. Instead of being interested in how many Black people had been killed by police, she only wanted to talk about how many New York City cops had been injured on the job. I finally had to just say that we were clearly getting our “facts” from different sources (to put it nicely), so there wasn’t any point in arguing.

Instead of arguing about numbers, I decided to try a more personal approach. I asked her: If Steve is really a “good cop,” then why is he complicit in racially profiling and silently standing by after those who wear the same uniform as him have killed members of the Black community? Instead of answering, she accused me of supporting violence against small-business owners and innocent police officers (I don’t) and even implied that I was endangering her boyfriend with my stance and social media posts (I definitely wasn’t).

Then she brought my partner into it, noting, “Imagine Jonah, the love of your life, being targeted because of everyone else’s opinions, leaving them feeling scared to live their life and go to work every day because they might get hurt.” Jonah is autistic and trans and had often felt exactly that way, and I was shocked she would discount the years of discrimination and fear they had faced. The truth is, Jonah has only felt safe coming out publicly in their profession in the past month because of the Supreme Court’s recent decision saying people cannot be fired due to their sexual orientation and/or gender identity. It was clear to me then that Nancy was unable to find empathy or kindness for anyone who didn’t fit inside her little bubble.

I’d had enough. “You aren’t listening to me at all,” I said. “This is really important to me! Would you have preferred I just stay silent so we could remain friends?”

She replied, “Yes. You started this for no reason.”

“I will not live quietly, and I absolutely refuse to have a friend so ignorant,” I answered.

There was a pause and then, simply, “Goodbye.”

That was it. I’d just broken up with my best friend of 12 years. I waited for the tears to come, but all I felt was relief. I realized then how many things I’d let slide over the years because I wanted to believe she was still the sweet, kind Nancy I’d first met. I’d been holding in a lot of anger and resentment, and it felt good to finally have it all out there. This cause is simply too important to just “agree to disagree,” even to keep an old friendship.

Black Lives Matter is really about everything important in our lives 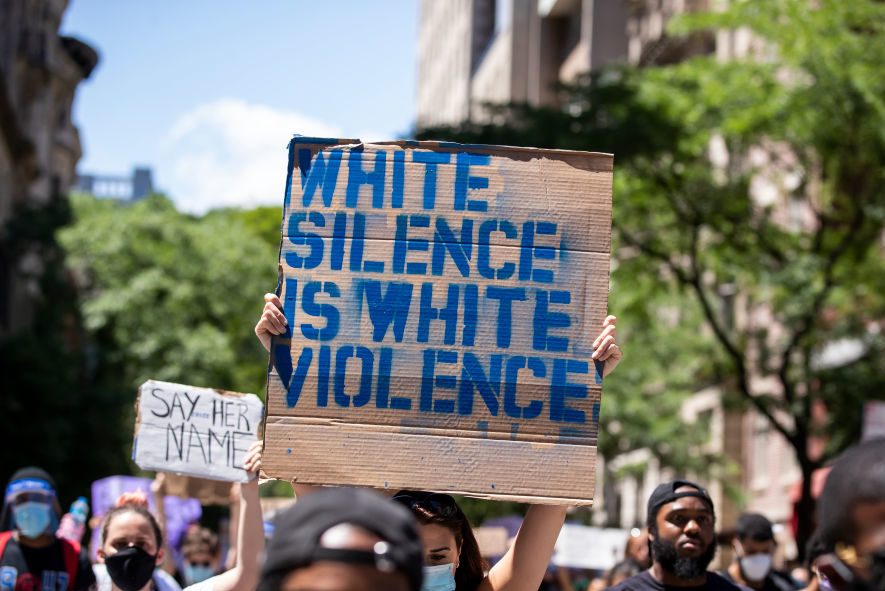 I understand that Nancy is partially acting out of fear because she’s scared for Steve, but this is about so much more than “not all cops are bad” and policing issues. This is about the systematic oppression the government and corporations have ingrained and enforced at every level—from education and health care to housing, beauty standards, and everything in between.

It’s not political; it’s moral. It’s about basic humanity, and I’m scared that Nancy can’t see beyond her own limited experiences. I’m scared it might even make her dangerous. She just got a job as a nurse at a major heart hospital, and I’m concerned that her inherent racism and skewed life view will lead her to not give people of color the standard of health care they deserve at a point when they are most vulnerable. People of color already have a much harder time getting effective treatment.

Nancy and I haven’t spoken since that day, and I don’t think we will ever be friends again, but I don’t regret speaking my mind. My willingness to talk to her inspired several of our other friends to talk to her as well. I’m glad that she got to hear different perspectives, even if her stance hasn’t changed. Perhaps someday that small ripple will become a wave and she’ll be open to hearing more.

Isabella M. is a senior publicist and lives with her partner in New York. To help further equality and justice in America, she asks that you please consider donating to the NAACP Legal Defense and Educational Fund. Or you can donate to one of these 14 charities and organizations dedicated to helping the Black Lives Matter movement.

What It Really Means to Be an Ally

Your Guide to a Tail of the Dragon Road Trip
My Best Friend Scammed Me Out of $92,000, Forcing Me into Bankruptcy
A Kidnapped Cab Driver Fought for His Life—and Ended Up with an Unexpected Friendship Instead