My Dad Helped Carve Mount Rushmore, and His Photos of the Project Are Kind of Amazing

My father told me he worked on the eyes of Thomas Jefferson and on the facial features of Abraham Lincoln. He even gave George Washington a haircut.

In 1935, my father became a part of history carving Mount Rushmore in the Black Hills of South Dakota.

The Bell Telephone Co. in Rapid City had just laid off my dad, George Rumple, when a miner friend asked him if he’d be interested in working on the Mount Rushmore monument. It was the Great Depression, and my father, who had a wife and three kids to support, jumped at the chance.

When I was just 4 years old, in 1936, I heard my parents talk about the more than 750 stairs the workers had to climb. I recall going with my mother, Gladys, to take lunch to my dad on the top of Mount Rushmore. We’d sometimes walk up the many steps or ride up in a hoist “bucket.”

I also met the two Native Americans who smoked a peace pipe at the top of the mountain to ensure no harm would come to the almost 400 workers involved with the project. They let me try the peace pipe, although I didn’t actually smoke it! No one died during the 14-year project, which ran from 1927 to 1941.

My father told me he worked on the eyes of Thomas Jefferson and on the facial features of Abraham Lincoln. He even gave George Washington a haircut.

After dynamiting strategic spots, the workers used drills and jackhammers to create holes in the granite for easier carving. I remember hearing the explosions and seeing the white clouds of dust from the blasts.

I also recall President Franklin D. Roosevelt coming to see the mountain in 1936 for the dedication of the Thomas Jefferson head.

Nearby Keystone is where my brothers, Glen and Lyle, and I attended school. When work ended on the project in 1941, we moved to the state of Washington and then to California.

Standing on the top of Mount Rushmore is still an awesome memory for me, and Dad always referred to the Mount Rushmore memorial as the “No. 1 won­der of the world.”

This Insanely Complicated Overpass Is Blowing the Internet’s Mind 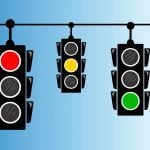 This Is Why Traffic Lights Are Red, Yellow, and Green