The Case of the Prohibited Pooch

Should a tenant with a disability be allowed to break a ban on animals? You be the judge.

By November 2000, six months after Joyce Grad had moved into Royalwood Cooperative Apartments in Royal Oak, Michigan, she was getting anxious about her seasonal descent into depression. “It always gets worse in winter,” says the now-64-year-old, who describes her feelings at that time as “suicidal.” She adds, “I was watching the leaves fall and thinking, I don’t think I can do this.”

Grad had been living alone on Social Security disability for years due to bipolar disorder, causing severe depression that prevented her from working. Sometimes it was so bad, she could barely get out of bed. Worried about her inactivity, she reasoned, If I had a dog, I would have to go outside for walks. But the co-op board had a no-pet policy.

Grad wrote to the board, asking it to waive the policy and allow her to have a small dog. Grad stated that according to the Fair Housing Act, “it is unlawful discrimination to deny a person with a disability ‘a reasonable accommodation of an existing building rule or policy if such accommodation may be necessary to afford such person full enjoyment of the premises.’”

She included letters from her psychiatrist and psychologist stating that a dog would help with her “debilitating depressive disorder.”

But the board rejected Grad’s request.

Two months later, Grad moved to an apartment in a building a few miles from Royalwood that allowed pets, and she acquired a ten-pound gray poodle from a family in the neighborhood. Grad named the dog Lady and trained the poodle to coax her out of bed in the morning and to take her home if she was out and experienced a panic attack.

About ten months after leaving Royalwood, Grad filed a complaint against the apartment complex with the U.S. Department of Housing and Urban Development (HUD). HUD investigated and, in August 2003, filed a civil complaint against Royalwood, claiming that it had, in fact, discriminated against Grad and violated the Fair Housing Act.

“The legal question was whether the requested accommodation would have lessened the effect of the disability,” explains Grad’s attorney, Gabrielle Frampton. “Would the dog have helped? Or would it have just been a pet?”

Did Royalwood Cooperative Apartments discriminate against Joyce Grad by not waiving its no-pet policy? You be the judge.

Instead of having HUD settle the matter, Royalwood opted to let a federal jury decide. In February 2005, in the U.S. District Court in Detroit, Royalwood’s attorney, Patrick Rode, argued that the defendants didn’t “believe” Grad was disabled. One co-op board member testified, “We all observed her walking around the property happy as a lark, very friendly, very gregarious. What disability?” The defendants also claimed there wasn’t enough evidence to prove that a service animal would lessen the impact of Grad’s alleged disability, as it would for, say, a blind person. “The dog is nothing more than a pet that need not be accommodated,” explained Rode.

“They were so completely rigid,” says Frampton, Grad’s attorney. “It was mind-boggling.” In the end, the jury ruled for Grad—the first federal verdict that recognized mental illness as a disability under the Fair Housing Act. Grad was awarded $14,209 in actual damages and settled with the defendants for additional punitive damages.

Was justice served? Does Grad deserve compensation from Royalwood? Let us know in the comments. 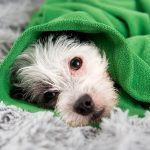