This Dad Surprised His Kids By Building the Ultimate Playhouse, and It Is AMAZING

Thirty years later, he built his grandkids an awe-inspiring playhouse too. 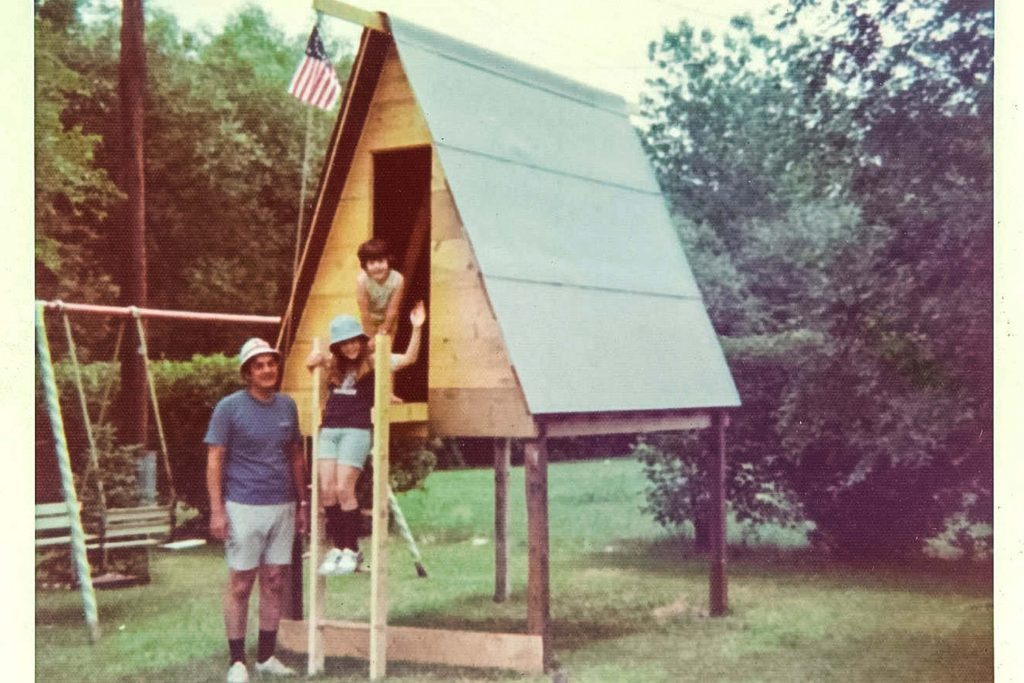 Summer at my house in the 1970s was a time for creativity, relaxation, and lots of fun. I was that lucky kid, the one who had the awesome playhouse. Believe me, though I was only 10, I realized and appreciated how special it was. The playhouse became my retreat.

Here’s how it began. At the start of summer vacation, my little sister, Colleen, Mom and I went to visit my grandparents in Canada for three weeks. My dad, Bill, couldn’t get time off work, so he stayed home.

What we didn’t know was that he was working all day on his job at the steel mill and then all night in the backyard on a masterpiece. The looks on our faces when we got home and saw the playhouse must have been worth all the hours he worked, because he was beaming. It was a complete surprise to us, and we were amazed it was all ours.

The playhouse had six wooden stairs leading to a door that locked. It had one pulley used to hoist the ¬American flag (Dad was a Vietnam War ¬veteran, so the flag was a must) and another to open the window. Later, Colleen and I helped Dad add a sandbox to the playhouse. He wanted us to have a hand in it, too. 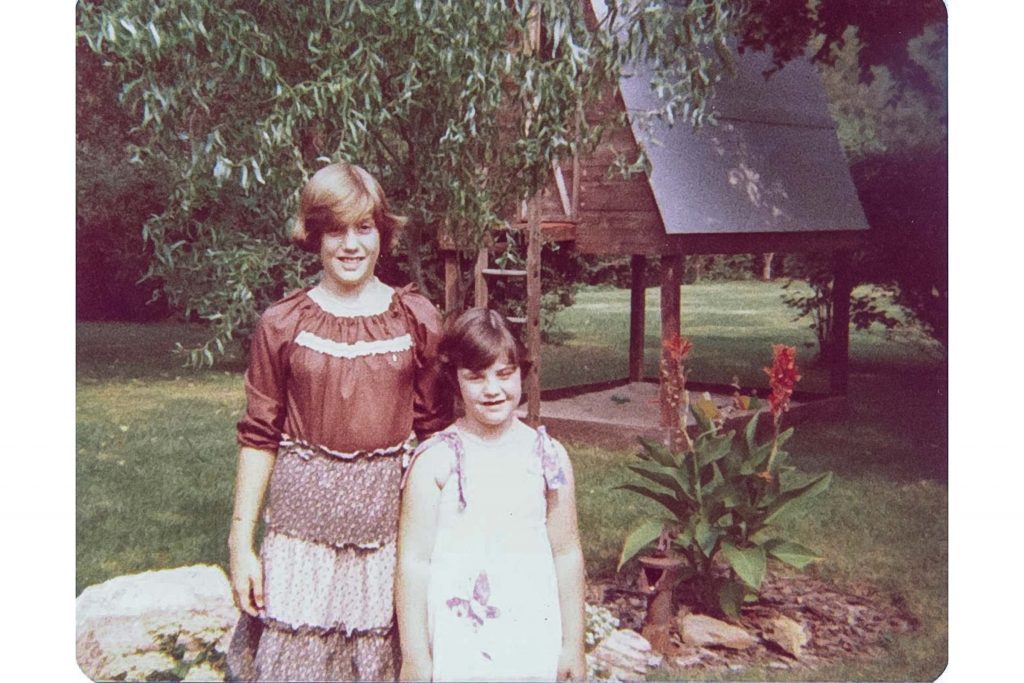 I already knew I wanted to be a writer, so I brought to the A-frame a typewriter with all my stationery supplies and wrote a book based on my favorite novel, A Wrinkle in Time. My pen pal letters to England all were written from the wooden floor of that space. The playhouse became my summer home. I would take my breakfast up there and spend all day writing, napping and daydreaming. This was where I read Black Beauty, Mandy and any book by Beverly Cleary available at the local library. There were many sleepovers, although the mosquitoes kept us from sleeping the whole night out in the backyard. 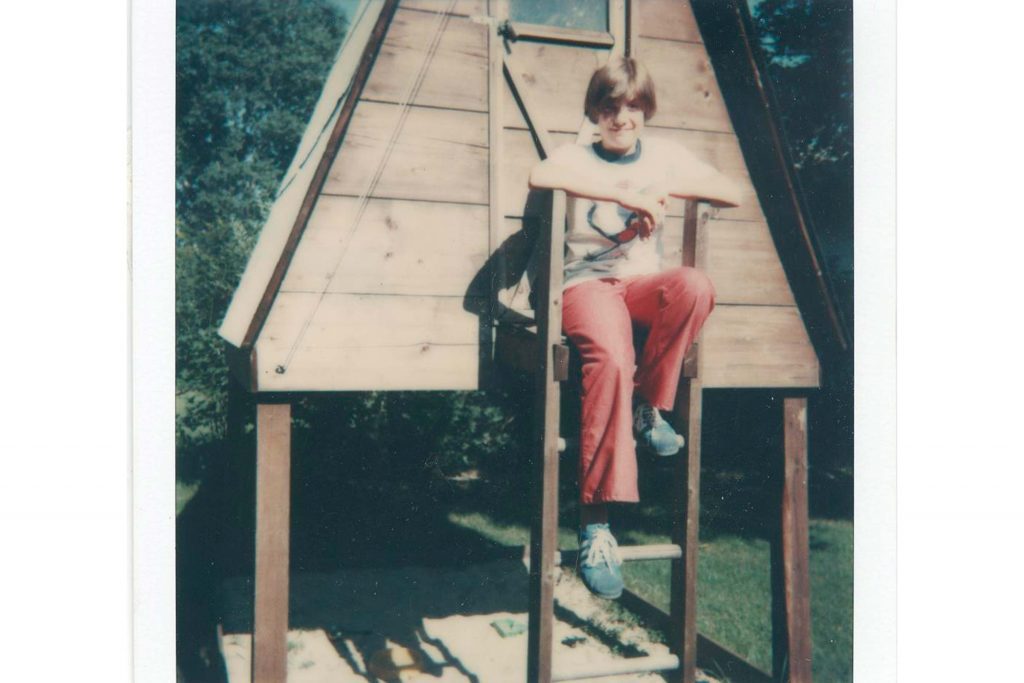 Because I was spending so much time there, I asked my mother if the postman could deliver my personal mail to the playhouse. She was too kind to tell me you needed a real address to have mail delivered, so she brought books, pen pal letters, junk mail, and Highlights magazines out to the playhouse herself.

Fast forward 30 years. Dad, my kids and I are in the backyard, basking in the beauty of a calm, quiet summer evening.

“Do you think the kids would like a playhouse?” he wondered aloud.

After hearing a resounding “yes” from all of us, my dad bought all the necessary materials. The kids were involved in the building process from the start. Of course, Dad didn’t let the kids do anything dangerous, such as use the nail gun. Instead, they dug holes for the posts, learned how to use a level and even placed the cedar shingles themselves. We encouraged Dylan, my 8-year-old son, to be creative and design the interior. His plan included a large window with a window seat, a rope swing and a desk.

Per my children’s requests, Dad screwed a large pretzel container into the ceiling so snacks could be kept safe from the wildlife. And he even ran an electrical cord from our sunroom to the playhouse so the kids and their friends could have a small refrigerator to store cold beverages. Hookups for technology were installed. Steel roofing would keep the rain out while giving my kids the pleasure of hearing the sound of rain on a metal roof. 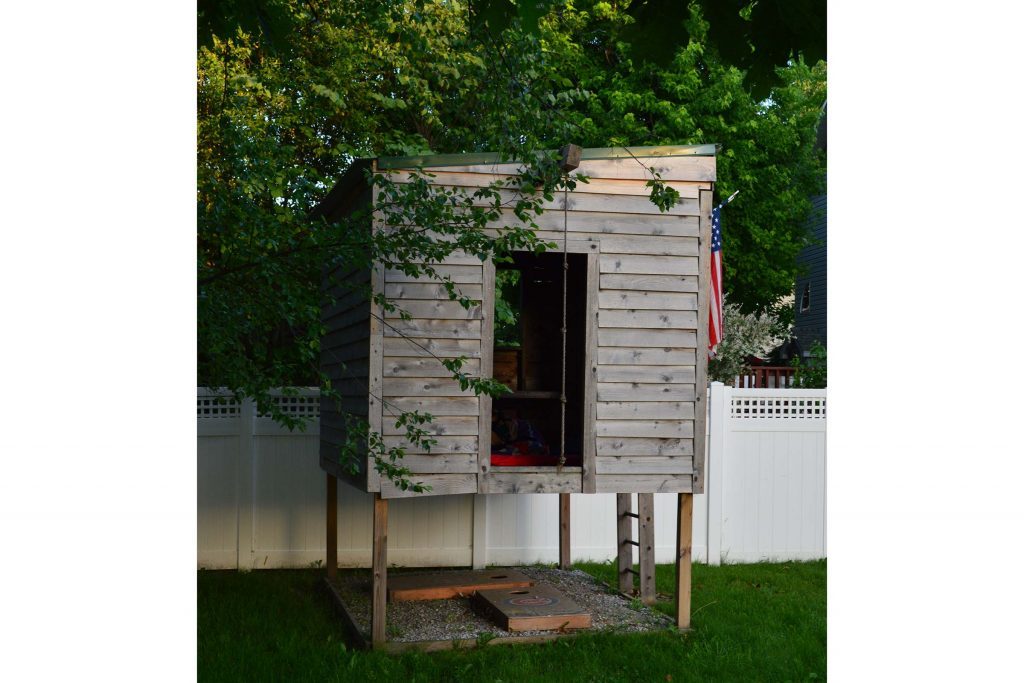 In addition to all these aesthetic updates in the playhouse, times had changed in our town since the 1970s. We got a stern notice from the town code enforcer that our structure required a permit. After paying the $130, my dad and his grandchildren were able to complete their masterpiece.

So I have a playhouse again, and my children share it with me. It’s an amazing writer’s retreat—private and quiet except for some birds and the occasional squirrel. We’ve had sleepovers inside it (cedar keeps out the bugs, mostly), played endless games of Apples to Apples and enjoyed the view of our fire pit from the playhouse. I see my children creating memories that they will treasure for the rest of their lives.

Best of all is the rope to climb down so that as we leave we can all be carefree kids. 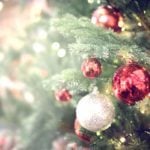 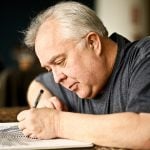