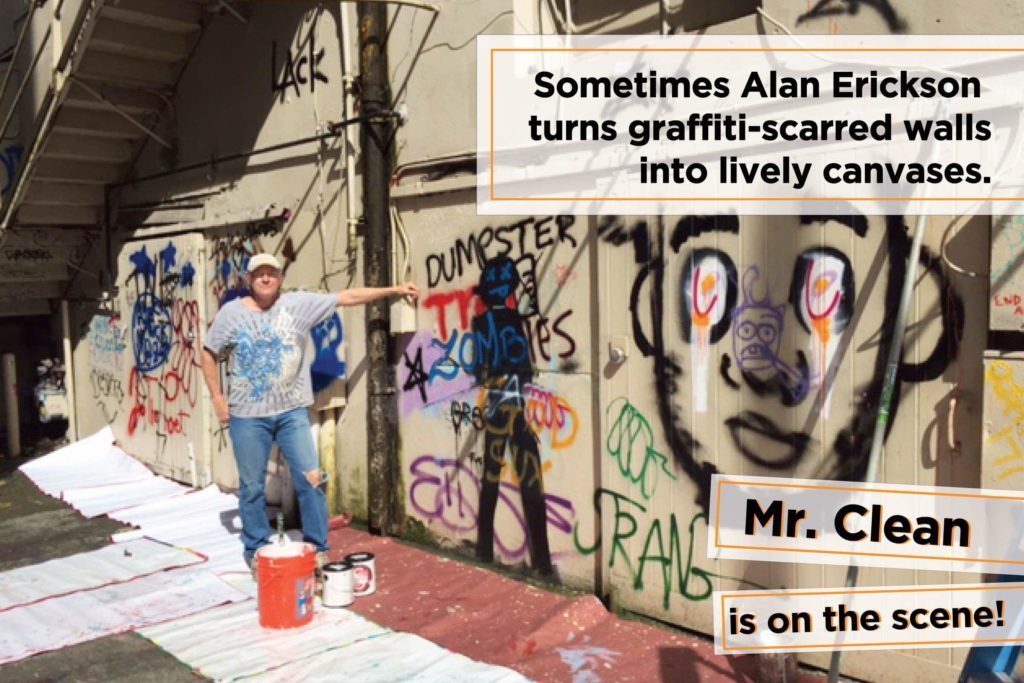 It’s a clear April morning in Olympia, Washington, when Alan  Erickson, 63, spots an eyesore on the side of the road. Blotches of black spray paint mar a sign identifying a local forest, and Erickson wants the graffiti gone. “It disheartened me that you could barely read it,” he says of the sign. Fortunately, Erickson had all the supplies he needed in the bed of his truck to clean the mess: paper towels, steel wool, rubber gloves, spray bottles of water, and graffiti remover. After 15 minutes of spraying and scrubbing, the sign was pristine. “I go by there every now and then and am so proud because it stands out in such a beautiful way,” he says.

As you’ve probably guessed, that purifying pit stop wasn’t a one-off for Erickson, a semiretired real estate business owner. He has made it his mission to wipe out graffiti for the past 30 years. He started in El Paso, Texas, where he would paint over graffiti that would show up on properties he owned through his business, and he continued when he and his wife moved to Olympia in 2011. Erick­son tackles roughly two graffiti sites a week on his own in addition to assisting city organizations with their efforts. “Anytime I can stop and spend a few minutes getting rid of something, I do it,” he says.

One project Erickson has planned to tackle is the constant vandalism of a home (which was once a grocery store) on a busy Olympia road. “I told them I’d paint the house all one color for free, and if they get any graffiti, I’ll have it covered by the end of the day,” he says. “Fighting graffiti is a small price to pay to live here. I go home content that I’ve changed the look of a beautiful town.”