Heads up, true believers: A partnership between Marvel Entertainment and Susan G. Komen for the Cure launches next week as 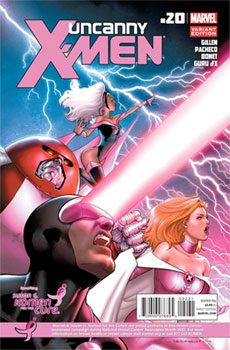 Heads up, true believers: A partnership between Marvel Entertainment and Susan G. Komen for the Cure launches next week as part of “National Breast Cancer Awareness Month.”

Six of Marvel’s best-known comic books—from the Avengers to Wolverine—will ship with Komen-branded, pink covers this month, in addition to a full page advertorial that aims to spread knowledge about the disease.

A PR rep for Komen told me that the initiative is “for education purposes only,” so no financial proceeds from sale of the books will make it to the cancer-fighting organization. But the special comics can still do some good. In a 2011 survey conducted with ACNielsen, DC Comics, Marvel’s primary rival, found that its audience skewed heavily male: 93 percent of respondents were guys. Marvel’s gender breakdown isn’t as clear, but it seems safe to assume it’s similar, making this a unique opportunity to inspire positive action from a demographic that might otherwise have a less obvious connection to the cause—the advertorial is even about male breast cancer.

Interested? You can view the advertorial on Marvel’s website in addition to each cover. To buy the books, check the shelves of your local comics shop on Wednesdays starting next week for Avengers #31, Captain America #18, Captain Marvel #5, Fantastic Four #611, Invincible Iron Man #526, Mighty Thor #21, Uncanny X-Men #20, and Wolverine #315.

My recommendation: Give ’em to a kid that wants to make a difference someday.