A horse shunned by his herd gets rescued by a woman who understands his pain. Then they live, play, and—ultimately—grieve together.

Katrina Andrews is a science teacher, and she’s the kind of teacher who makes you wish she had been your teacher.

“Geodes are my favorite,” she says. “I have a whole collection and I take the better ones to school to have my students look at them. The backside just looks like a rock. It’s unremarkable. But it has all these beautiful crystals inside. Unless it gets broken, you can’t see the beauty.”

It’s a message Andrews says her middle school students understand, though it’s one she had to experience herself.

Several years ago, Andrews moved away from Ritchie County, West Virginia, where she had grown up and lived nearly all of her life. But she soon found herself ostracized by many around her. So, in 2018, when she saw that a couple of acres of land were for sale just over the mountain ridge from where she was from, she decided to buy them and move back home.

She also decided to rescue a horse, and when a friend told her about one called Pretzel Twist (Twister for short), Andrews knew that it was the horse for her. Twister was being similarly ostracized—by his own herd. They pushed him around and left him the scraps of the food.

“He was at the bottom of the pecking order,” says Andrews. “And I truly believe it’s because he has such a kind heart.”

So, Andrews took him in. No longer the target of more aggressive horses, Twister got up to a healthy weight, and his coat began to shine. “When his summer coat comes in, it shines in the sun like a copper penny,” Andrews says. “And he just didn’t seem like a Twister. So, he’s been Copper ever since.”

Copper loves to sit and lay in the sun, and sometimes Andrews lays with him. Like dogs, horses lick to show that they’re happy. One day, while they were out sunning themselves, Copper licked Andrews’ leg. 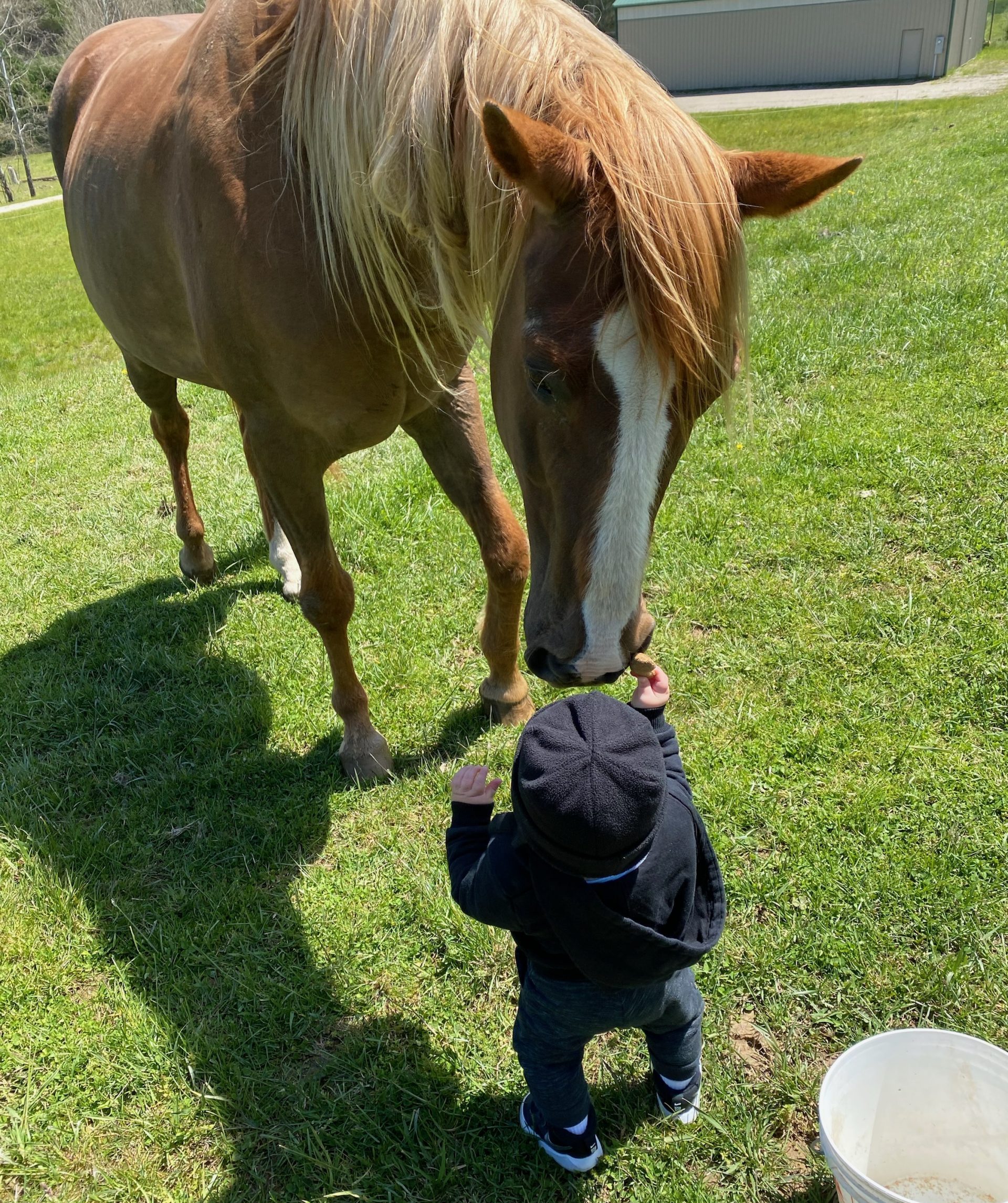 A herd of their own

Andrews tried putting Copper with other horses, but Andrews could tell that it was stressful for Copper to be around them. It actually made him depressed. “I know some people will say, How can you tell the horse is depressed?” she says. “Well, when you’re a horse person, you can tell.”

Copper’s chosen herd was simple: himself, Andrews, and her dog. That is, until Copper met Joe.

Joe lived on the other side of the river from Andrews, but she could see his house from hers. She had also known Joe for 30+ years, but he was not the same Joe as before. He had developed Atypical Parkinsonism, characterized by stiffening muscles and the inability to move his feet the way he wanted to. Andrews had known Joe as a clog dancer, and a good one, at that. “To see somebody who could do that kind of stuff not even be able to walk to the bathroom was very difficult,” she says.

Andrews chose to do something about it. “I made the commitment that I was going to take care of Joe,” she says. Andrews stopped by his house every morning on her way to school and again on her way home. Here are other amazing caregiver stories.

Andrews has a side-by-side buggy car, and she often put Joe in the passenger seat and drove over to her house so that Joe could see Copper. “As soon as I came up over the hill,” she says, “Copper could see him.” She used to drive the buggy straight into the field where Copper would stick his head into the vehicle to greet Joe with some licks.

“Copper is a 1200-pound horse,” Andrews says. “He could have easily injured Joe. But I didn’t have to worry or stand there holding Copper back.” That’s because Copper was always gentle with Joe and loved the attention that Joe gave him. “If he wasn’t getting enough, he would gently pull on Joe’s arm,” Andrews says. “Joe was his human. Period.”

One day, Andrews handed Joe a brush so he could groom Copper, an activity they both enjoyed very much. Eventually, though, Joe couldn’t move the brush. But all he had to do was hold it, because Copper would do the rest, moving back and forth, rubbing himself against the brush so that Joe could still groom him.

Over time, Andrews saw Joe’s condition deteriorate. “When Joe got really bad,” she says, “his family wanted to put him in assisted living. But he didn’t want to go. I was determined that if I could do anything about it, he wasn’t going to have to.” Along with a friend, Andrews got certified to be an in-home caretaker. She took care of Joe until he passed. He died at home, as was his wish.

“When Joe passed,” Andrews says, “Copper grieved.” Every time Andrews drove the buggy home, Copper would come out to greet it. “And, of course,” Andrews says, “Joe wasn’t there. How do you explain to a horse that his friend is gone?”

The answer is you can’t. But now, several months later, Copper seems to understand. The pain is still there, but he and Andrews are back to doing the normal things that they always do.

“I’m a firm believer that God gives you what you need,” Andrews says. “And God gave me Copper and Joe. And when the two of them came together, it was quite magical.”

Just like her geodes, Katrina Andrews’ heart is broken. But more than anything, it is beautiful.

Next, read true stories that prove animals feel the same emotions we do.

ⓘ
Now Trending
What’s Ahead for Bridgerton in Season 2?
This Veterinarian Helps Pets of Homeless People Out of His Own Pocket
After a Woman Rescued an Injured Swan, Strangers Helped Her Get the Bird Across the City to a Rehab Center