Are You a Creative Creature or the Village Videot?

Living is more than watching and listening. It is doing. (This Reader's Digest classic short story was originally published in 1949 as "Open Every Door.") 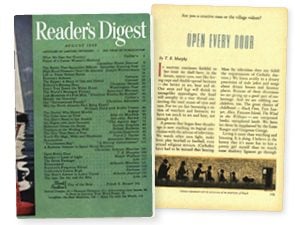 If nature continues faithful to her trust we shall have, in the future, saucer eyes, ears like lov­ing cups and double-spread bottoms—the better to see, hear and sit. Our arms and legs will shrink to sausage-like appendages; the head will atrophy to a tiny thread con­necting the used senses of eyes and ears. For we are fast becoming a na­tion of watchers and listeners; we have too much to see and hear, not enough to do.

A process that began four decades ago is now reaching its logical con­clusion with the advent of television. We watch other men fight, make love, play baseball or football, even attend religious services. (Catholics have had to be warned that hearing Mass by television does not fulfill the requirements of Catholic doc­trine.) We listen avidly to a dreary procession of stale jokes and songs about dream houses and faraway places. Because of these diversions we are giving up a good part of our heritage. And we are robbing our children, too. The great classics of childhood—Huck Finn, Tom Sawyer, Alice, Treasure Island, The Wind in the Willows—are unopened books, unexplored lands. We have let them be supplanted by the Lone Ranger and Gorgeous George.

Living is more than watching and listening. It is doing. I believe in the heresy that it’s more fun to kiss a pretty girl myself than to watch some shadowy figment go through the motion on a screen. I would rather bat a ball to a bunch of kids than watch Joe DiMaggio hit a homer. Evenings, I would rather paint a picture or bake a cherry pie than to sit on my calluses listening to timeworn allusions to Al Jolson’s age, Jack Benny’s miserliness, Bob Hope’s nose.

Oh, I don’t dislike spectator sports. Some of my best friends are spectators. In the course of a year I’m likely to see a couple of fights, some baseball and college football. I like them all in small doses. I refuse to let them dominate my life.

A few years ago I walked into the office of a distinguished elderly law­yer and found him reading a book of verse by an obscure 19th ­century poet. Behind him were volumes on astronomy, botany and geology. When I expressed surprise at the range of his reading, he said: “Life is a corridor with many doors. I am hurrying to open as many as I can before the ultimate one is opened.”

I thought of that next day when I tried in vain to hire a carpenter to screen a porch. At the library I got a book telling how to do it, and for the first time in my life I built some­ thing with my own hands. It wasn’t an expert job. But I learned the thrill of doing something I’d always thought beyond me. It was a small door I opened then, but it was the first of many.

An important thing to remember is that, no matter what strange new door we plan to open, there are ex­perts to guide us—for free. Want to paint a picture? There are hun­dreds of books to tell you how—books in which the great masters have spread out their own hard­ earned knowledge. Want to build a swimming pool or a kitchen table? Want to be a sculptor in your spare time? Want to learn French or Italian? You can learn if you have enough curiosity to open a door.

One of my favorite doors opens into the world of gardening. A lot of jokes have been told about the “book” farmer. I’m a book farmer and don’t care who knows it.

A neighbor of mine who had planted the same strain of corn for 50 years was inclined to look down his nose at book farmers. One day I gave him a handful of hybrid seed.

A few weeks later I stopped by. “It’s the only corn that’s any danged good,” said my friend. Then, in reluctant capitulation, “I’d like to learn some more about them seeds.”

Some people are timid about try­ing new things. I know one chap who’d been taking photographs for 20 years. One day, after a big local event, I asked him how his pictures came out. He looked surprised. “I won’t have them back for a couple of days.”

“Do you mean you don’t develop and print your own pictures?”

He shook his head. “I’m afraid that’s a little too technical for me.”

I led him to the nearest drugstore. “Look at the label on this developer can.” I said. “You can read, can’t you? The manufacturer has been writing all these things for you.” He took the plunge and is now an excellent all­-round photographer.

A woman I know was discouraged by the high prices of clothing during the war years. A complete novice at sewing, she found all the information she needed in manuals and pattern guides. Today, though dresses are cheaper, she continues to make her own. “Now I’m doing something while I listen to the radio,” she explains.

I believe that doing things for yourself is the vital component for a sound personality and an exciting life. In the past two years I have done 50 or more oil paintings, most of them bad. I have written a little poetry and read a great deal more. I have baked everything from a loaf of bread to a mince pie. I have studied Spanish and geology. And because I have four children I have also fished, skated, played baseball, made snowmen, played badminton. Meanwhile I have held down a full­ time newspaper job.

I believe fervently in the idea that the hallmark distinguishing man from beast is his creative in­stinct. It is one of the anomalies of our civilization that the most inten­sive efforts to satisfy man’s creative needs are made in mental hospitals.

Creative expression is not con­fined to “making” something. I know one middle­-aged woman with a grown family who refurnished her cellar as a club for teen­agers. In a few years thousands of young boys and girls had come under her warm and pleasurable influence. Another middle­-aged childless couple acted as foster parents to state wards. They kept none of the board money but put it aside for the education of these homeless waifs. They’ve raised dozens of children and had fun doing it.

An industrialist friend of mine started out as a song writer and then went into a factory. He has made a lot of machinery and some money. But only when he organized a neighborhood singing club did he fulfill his ambitions. “Sometimes,” he says proudly, “they even sing some of the songs I wrote.”

These are doors to new worlds. They are tiny declarations of inde­pendence against being made into the faceless mass man who sits, listens and watches.

A philosopher once observed that man lives in a prison cell lined with mirrors. Today that prison cell is lined with loudspeakers and screens. All very fine, to a degree. But for a really full life we’ve got to burst out of the cell—and our children with us. For them the danger of growing into a race of super-robots is greater because the conditioning has begun earlier.

Teach them, by example, to open doors. Show them the value of a wide range of interests in contrast with the narrowly grooved life, the difference between apathetic accept­ance of things as they are and in­quiry. The result? It is the difference between man the intelligent, creative creature and man the village videot. 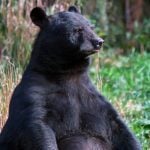