After being obese for years, this woman's scary diagnosis led her to find a diet that helped her shed the weight and reverse her condition. 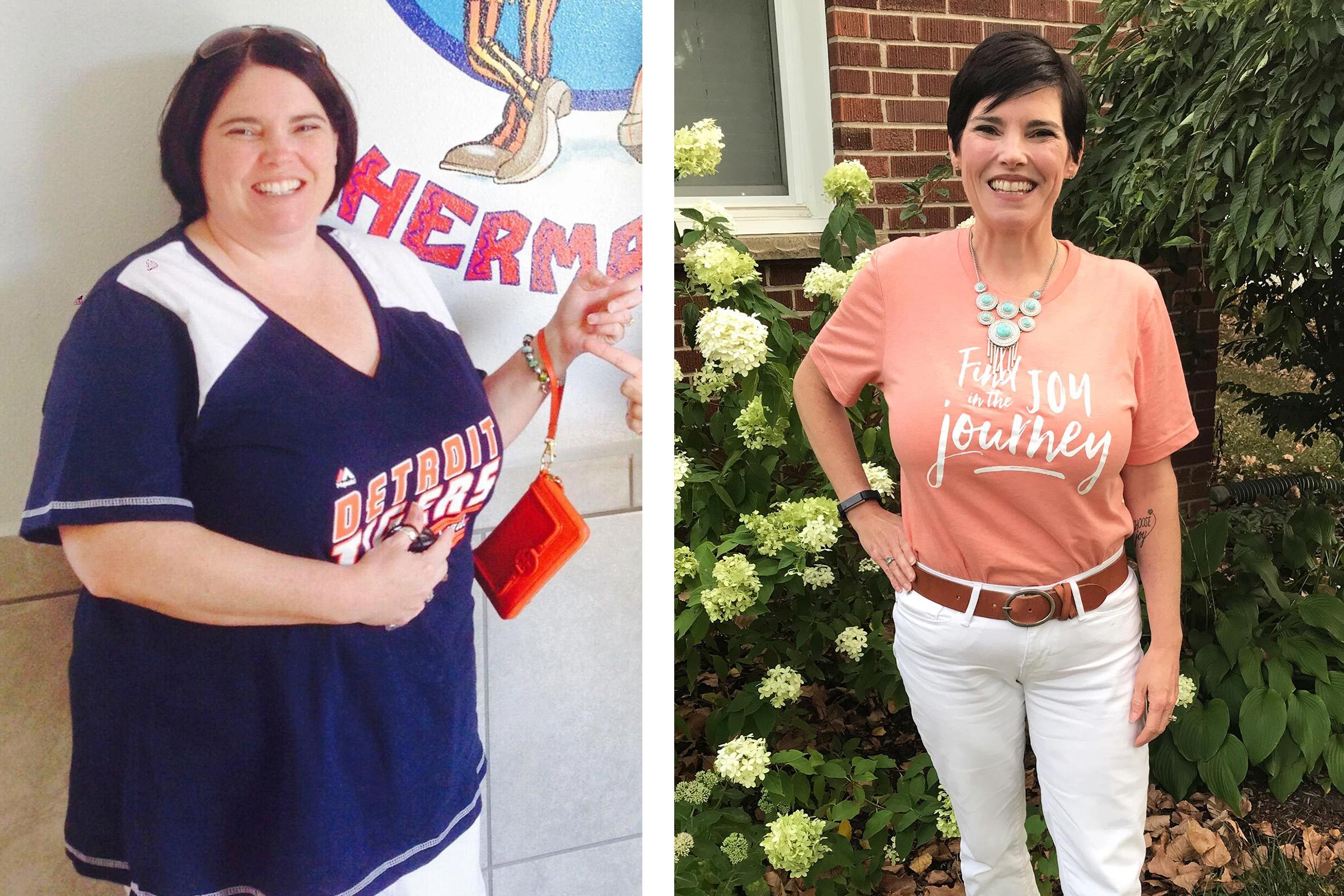 Overweight since college, 52-year-old Christine Trimpe of Berkley, Michigan, had tried everything to get her weight under control. Weight Watchers, the South Beach diet, even a medical weight loss program that limited her to 800 calories a day—nothing worked for Trimpe long-term. Right around the time her health and hope had reached their lowest points, Trimpe discovered a solution that ended up saving her life—and she wants to share it with the world.

As her weight kept creeping up, Trimpe’s health was in steep decline. She was battling extreme fatigue, brain fog, knee pain, and swollen hands; eventually, depression set in. “I spent a lot of time laying on the couch, napping, or avoiding life,” Trimpe said. Two years ago, she was diagnosed with obstructive sleep apnea (she stopped breathing numerous times during the night) and she started experiencing severe menstrual cramping.

Her gynecologist ordered pelvic and abdominal ultrasounds. While the scans revealed that Trimpe had ovarian cysts, her doctor diagnosed her with something even more serious: Non-alcoholic fatty liver disease (NAFLD), a condition in which fat accumulates on the liver. It’s the most common type of liver disease, and about a third of Americans have it, according to the National Insitute of Diabetes and Digestive and Kidney Diseases (NIDDK), and it’s on the rise.

“The numbers have absolutely skyrocketed,” says Jason Fung, MD, a nephrologist in Toronto. “If you look at the causes of liver failure, it’s actually becoming one of the top causes in North America.” Doctors can use blood tests, imaging tests, or a liver biopsy to diagnose NAFLD, but because it doesn’t have obvious symptoms, it’s often caught late when the liver has already suffered lasting damage—that’s why it’s known as a silent killer. Left untreated, NAFLD can lead to cirrhosis of the liver and liver failure; a liver transplant may be necessary, reports the NIDDK. Keep an eye out for these 9 fatty liver symptoms.

Being obese or having type 2 diabetes raises your risk—between 70 and 90 percent of people with these conditions have NAFLD. Eating a diet loaded with sugar and refined carbohydrates seems to aggravate NAFLD, says Dr. Fung. The body transports excess blood sugar to the liver where it’s turned into fat—and it can accumulate on the organ. Dietary fat, on the other hand, is put to use or stored with other fat cells, he explains.

When Trimpe started to do her own research, she became intrigued by the ketogenic diet—an extremely low-carb approach that forces the body to burn fat instead of sugar for energy. Some experts are wary of the eating plan, but early research suggests it could help people like Trimpe: A small study published in the journal Cell Metabolism suggests swapping carbs for protein can reduce fat in the liver within two weeks—regardless of how many calories a person eats or how much weight they lose. “The proof is going to take some time,” says Dr. Fung, “but on the other hand, a simple intervention like cutting down on sugar is something everyone can agree on.” Here are 9 easy habits that can reduce your risk for liver disease. 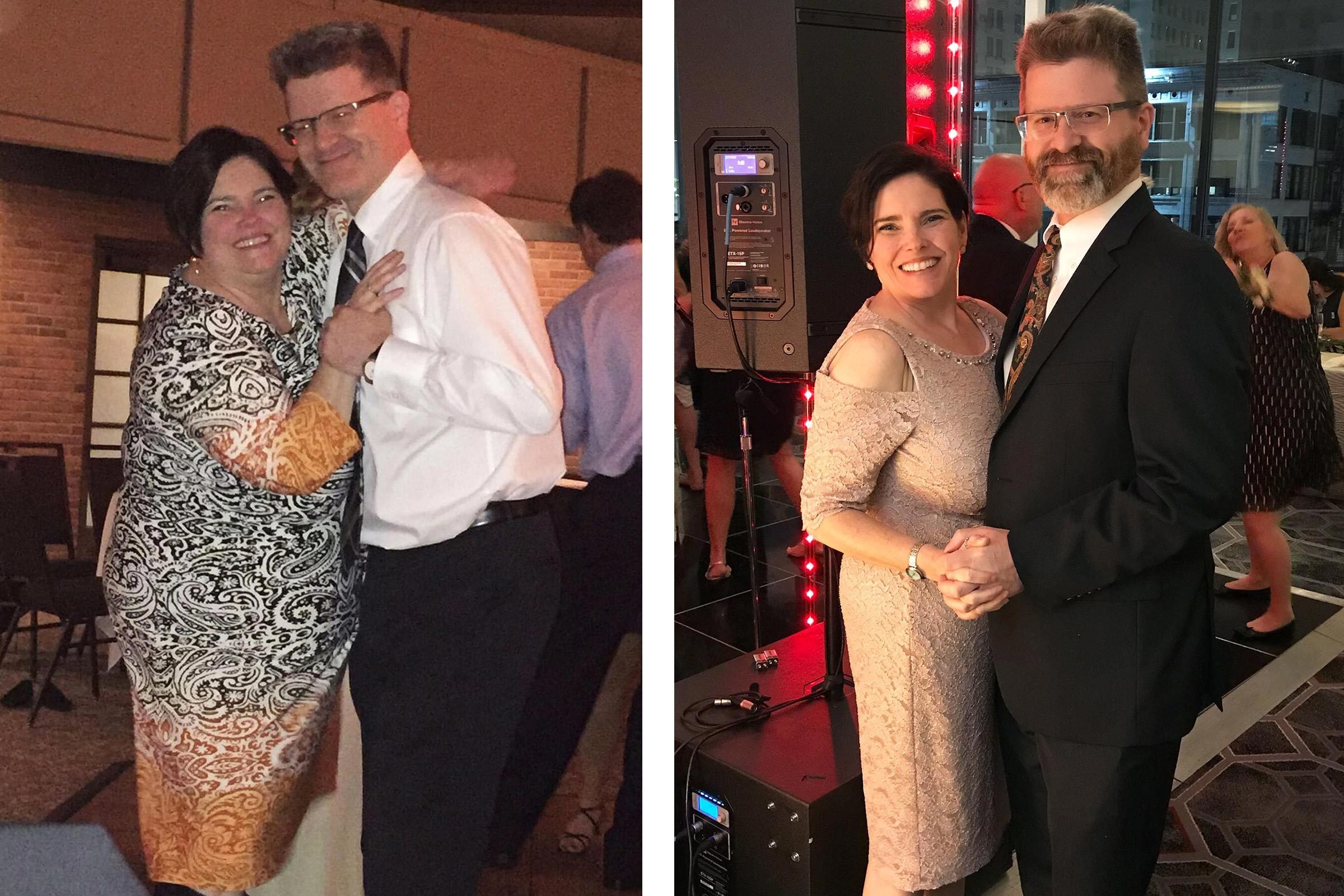 Trimpe decided to dive in: Using the apps like LoseIt and Carb Manager to track her food, she followed a plan that was 5 percent carbohydrates, 20-25 percent proteins, and 70 to 75 percent healthy fats; she was eating fewer than 20 grams of carbohydrates a day (the equivalent of five teaspoons of sugar).

Making sure her food sources were clean, Trimpe filled her plate with eggs, grass-fed beef and chicken, and healthy fats like avocado, coconut oil, and grass-fed butter. She says she couldn’t believe how full she felt on the plan—suddenly, she could go for hours without thinking about food. Within the first month alone, she lost 13 pounds.

“When the weight started melting off—pretty much almost immediately—I knew this was the lifestyle that was going to work for me,” Trimpe says. Within a year, she had lost 100 pounds, her symptoms had cleared up, and she had much more energy. When she returned for a follow-up ultrasound, her ovarian cysts were gone and she no longer had fatty liver disease.

With a new lease on life, Trimpe hopes to inspire others struggling with obesity and chronic health conditions. “I’m really determined to make the best of this gift that God has given me to go forward with this lifestyle and teach people what I can,” she said. Check out 13 things doctors want you to know about the ketogenic diet.

Julie Revelant
Julie Revelant is a health journalist, content marketing writer, copywriter and founder of Revelant Writing and JulieRevelant.com, where she teaches parents how to raise healthy kids who crave healthy foods. Julie has written hundreds of stories for print and digital outlets including RD.com, FIRST for Women, Woman’s World, Esperanza, EverydayHealth.com, WhatToExpect.com, theBump.com, and Babble.com. For nearly 6 years, Julie wrote Healthy Mama, a column for FoxNews.com where she covered pregnancy, postpartum, maternal and children’s health and nutrition.