How A Deejay For the Developmentally Disabled Became a Community Hero

A deejay takes the stage to lift the spirits of a community in need.

It’s 6:30 p.m., and Angela Fox is early. Although the klieg lights at the Mt. Scott Community Center in Portland, Oregon, have already been dimmed, the dance has yet to begin. Fox stands shyly by the coat-check table, awaiting familiar faces.

At 43, her voice is soft, and her sentences are limited to a handful of words. When she spots a friend standing across the room, she smiles, threads her way through the throng, and taps him on the shoulder. He turns, and she wraps him in a hug. Soon, more friends cluster around them, eager for the night to begin.

On the first Friday evening of each month, about 175 people—most of them 25 to 55 years old, with a smattering of teens and elderly folks—gather at the large auditorium to socialize, laugh, and dance. This is not your typical community event. Fox and her friends are developmentally disabled. Some are profoundly so; others are able to take the bus alone or shop for groceries. Many of them still live with their parents or in group homes.

[pullquote] “Not a dance goes by that I don’t have tears in my eyes.” [/pullquote]

The deejay, Tom Farley, 68, kicks off the dance with a crowd-pleaser, Bob Seger’s “Old Time Rock and Roll,” and follows it up with Taio Cruz’s “Dynamite.” Then he spins Joan Jett’s “I Love Rock ’n’ Roll.” The dancers move enthusiastically to the beat. 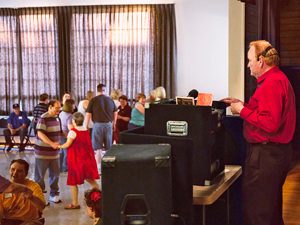 “There’s a spiritual component to this,” says Farley, a former Catholic priest better known here as Hey, Deejay. “I believe I enrich their lives.” He’s as passionate about the relationships that he has formed here during his 28 years as a deejay as he is about spinning discs. (By day, Farley is an administrator at an engineering firm.)

At first, he wasn’t confident about his music choices or his onstage banter. But the group proved more appreciative than he’d expected. “When they hear a song they really like, they pack the floor and cheer,” he says. “Even when they’re not fond of my choice, they stay on the floor.” The highlight of every dance is the Village People’s “Y.M.C.A.”

The monthly dance was started when parents became increasingly aware of the social isolation their disabled children experienced after graduating from high school. “All people have a need to feel self-worth,” says Nancy Kannard, whose 43-year-old son, David, has Down syndrome and attends the dance. “That’s a big part of this. Go meet your friends and have fun.”

Over the decades, Farley’s son, Byron, and daughter, Paige, often joined him at the event. As a six-year-old, Paige would seek out a woman in her 20s who wore a princess costume and tiara. Farley attests that Paige, now 30, believed the woman was the real Cinderella.

As his own children grew up, so did a generation of dancers. Farley chokes up whenever he learns that one of his regulars has moved or passed away. “It leaves a hole in my life,” he says.

Now Farley cues up the next tune. Michael Jackson’s “Billie Jean” fills the room. One middle-aged man approaches a woman in the center of the dance floor and silently extends his hand. She grasps it, and he draws her close. Soon they’re dancing together, gazing into each other’s eyes, and smiling.

Farley waves to the crowd and acknowledges the shouts of “Hey, Deejay!” The music swells, and the dance floor fills.

“Every time I’m here, I see something that touches my heart,” he says. “Not a dance goes by that I don’t have tears in my eyes.”