What’s the Difference Between CBD Oil vs. Hemp Oil?

CBD oil and hemp oil are both derived from the cannabis plant and can be used topically or ingested, yet there are key differences.

It can be hard to understand the difference between the two since they’re often used interchangeably. Yes, they both come from the Cannabis sativa plant. And, yes, they both can be used topically or ingested.

But there are key differences between these two oils and how they may impact your overall health.

The difference between hemp oil and hemp seed oil

To know the difference between CBD and hemp oil, you first need to know exactly what hemp oil is. While “hemp oil” may be used as a shorthand for hemp seed oil, they are actually not the same thing.

Hemp seed oil comes from the seeds of the hemp plant. While marijuana and hemp are both Cannabis sativa plants, they are different varieties.

Hemp plants contain little or no delta-9-tetrahydrocannabinol, or THC, the main active ingredient in marijuana. (In fact, hemp plants must contain 0.3 percent or less THC to be grown legally, while marijuana plants in states with legal marijuana can have 12 to 25 percent or more.)

The seeds of the hemp plant don’t naturally contain either THC or CBD, although they sometimes can become contaminated by trace amounts during processing. Therefore hemp seed oil doesn’t contain THC or CBD, and is valued more for its nutrients and moisturizing properties.

It’s often used in food and beauty products, but don’t look to hemp seed oil for the cannabinoids found in the rest of the plant, which are thought to be useful for treating certain conditions.  (Here’s what you need to know about CBD vs THC.)

On the other hand, hemp oil is extracted from the stems, leaves, and flowers of the hemp plant, which do contain CBD and sometimes small amounts of THC. Hemp oil would be considered a full-spectrum oil—it contains all the compounds found in the plant—and may be higher or lower in CBD, depending on the source of the product.

CBD oil, on the other hand, is specifically meant to contain the compound that’s been found to be useful as a remedy for seizures, pain, anxiety, and other health problems. (And to make it even more confusing, CBD oil can be derived from either marijuana or hemp plants.)

Don’t let misinformation keep you from improving your well-being! Learn the science behind CBD with expert facts and first-hand accounts inside the all-new book, The Essential Guide to CBD.

Hemp seed oil has a grassy smell and taste, and a greenish hue. Hemp seeds and hemp seed oil are nutrition powerhouses chock-full of inflammation-fighting omega-3 and omega-6 fatty acids and antioxidants. (Here’s the difference between hemp hearts and hemp seeds as well as five other tiny superseeds you should know.)

Because it’s packed with healthy fats, hemp seed oil is often added to food and even used as a cooking oil. Hemp seeds, which have a mild nutty taste, can be added to food for a nutritional boost, as well. Hemp oil is also a popular ingredient in skin-care products.

People rarely use hemp seed oil for recreational or healing purposes because it has little to no CBD or THC.

In addition to omega-3 and omega-6 fatty acids, hemp oil contains gamma-linoleic acid (GLA). All of these “good fats” have an array of proven and potential benefits.

For example, omega-3s have been linked to better heart health. They can also help control symptoms in people with eczema, lupus, and rheumatoid arthritis, and may even help ward off vision loss and dementia, according to the National Institutes of Health.

Hemp seeds are also a rich source of protein and magnesium. Thanks to their fiber content, they also promote digestive health.

How does hemp seed oil interact with the body?

The fats in hemp oil have a variety of effects on the body. They are key components of cell membranes and hormones, and also have anti-inflammatory effects.

Side effects of hemp seed oil

Consuming hemp seed oil or hemp seeds may cause digestive issues like diarrhea, but it is generally considered safe. 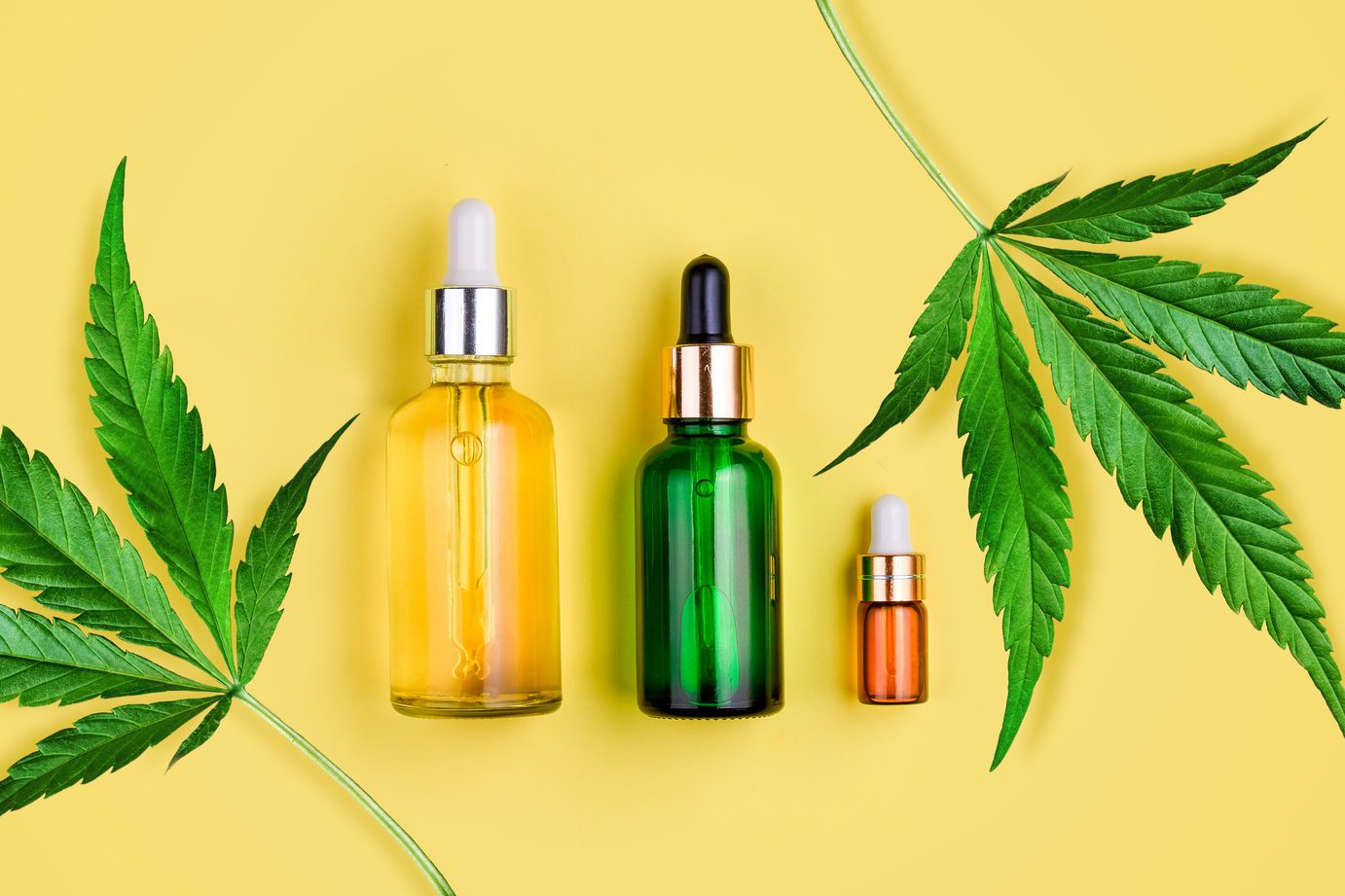 CBD oil can be derived or extracted from hemp plants. It can also be produced from higher-THC marijuana plants in states where the plants are legal. But it’s produced using the flowers, leaves, and stems of the plant, not the seeds.

The surface of the plants are studded with trichomes—tiny hair-like projections that produce varying quantities of CBD, THC, and more than 100 other cannabinoids—as well as other beneficial (and non-intoxicating) chemicals to protect the plant from pests and ultraviolet rays. Don’t miss how this 16-year-old found relief for his arthritis pain by using CBD oil.

The benefits of CBD oil are still being investigated. But there’s tantalizing evidence (most from studies in laboratory dishes and mice, as opposed to humans) to suggest that the cannabinoid may help with sleep, anxiety, and pain.

Raw CBD oil hasn’t been processed after extraction from the plant. It may contain the CBD precursor, CBD-acid (CBDA), which some research suggests may have its own health benefits.

CBD-infused oil includes CBD concentrates. This category can also refer to an oil to which CBD isolate (a super-concentrated, near-pure CBD product) has been added.

How does CBD oil interact with the body?

The effects of CBD in the body and brain is still not fully understood, but it appears to reinforce and support the endocannabinoid system (ECS), says Greg Gerdeman, PhD, a cannabis neuroscientist and educator.

The ECS is made up of cannabinoid-like chemicals naturally produced by the body called endocannabinoids, the cell surface receptors that interact with them, and the enzymes that break them down. It’s critical to maintaining homeostasis, or balance, in the body, Gerdeman says. “There’s a lot of basic science to show that the endocannabinoid system is a buffer against stress.”

In addition to supporting the ECS, he adds, CBD is also an antioxidant, and animal studies suggest it has neuroprotective effects.

What are the side effects of CBD oil?

CBD oil is generally considered to be safe. But it can react with many medications, making them more or less effective.

“Even though it doesn’t get you high, it can interact with a lot of drugs, and that can be a potentially helpful thing or it can be very dangerous,” says Martin A. Lee, co-founder and director of Project CBD, a California non-profit that promotes CBD research. Find out more about why CBD doesn’t get you high.

One of the safest methods for extracting CBD from plants is with supercritical carbon dioxide, which yields a golden, waxy oil.

Ethanol can also be used to make tinctures of cannabis, an old-school remedy that the U.S. Pharmacopeia recommended for nerve pain, depression, and muscle spasms in the 19th century. A drawback of alcohol tinctures is that they may contain chlorophyll, lending an unpleasant taste.

Another method, hydrocarbon extraction, uses butane and other extremely flammable solvents, which can leave a toxic residue in the extract.

If you’re concerned about a positive drug test for marijuana but still want to use CBD, your best bet is to find it in isolate form, so there’s very little chance you’ll be exposed to enough THC to flunk a drug test.

But consumers who want to use CBD oil need to do their own due diligence to ensure that the product they buy contains what the label says it does. The CBD boom—along with spotty regulation—has led to multiple dubious products finding their way to drugstore and gas station shelves.

In a study published in 2020 in the Journal of Dietary Supplements, researchers found that only three of the 25 hemp oil products they purchased in Mississippi contained an amount of CBD within 20 percent of the amount claimed on the label. Fifteen had much less CBD than they claimed. And two had over 50 percent more. (Five products did not make any CBD content claims.)

Three products they tested contained THC in excess of the legal 0.3 percent limit, while four contained synthetic cannabinoids—lab-produced substances with cannabis-like properties (such as K2 and Spice) that can cause seizures, psychosis, and even death, according to the Centers for Disease Control and Prevention.

Third-party-tested CBD is your best bet

If you live in a state with legal marijuana, you may have access to state-licensed dispensaries, which are required to test the potency and purity of their CBD products.

If you don’t, you can still make sure that the CBD products you buy have been independently tested. The manufacturer should have a Certificate of Analysis from a third party available for the product that confirms its claimed CBD content, and shows that it’s been tested for contaminants like heavy metals and mold. Some products even have a QR code on the label so you can download the COA and peruse it before purchase. Next, see if it’s safe to give CBD to your dog.

Everything You Need to Know About CBD Edibles

CBD vs. THC: What’s the Difference?

Why Do Dogs Lick Their Paws? 7 Common Reasons
The Best Memorial Day Mattress Sales of 2022
Here’s What Virology Experts Think About Dropped Masks on Public Transport as New Variants Spread