A soldier forms a special bond with his canine partner. 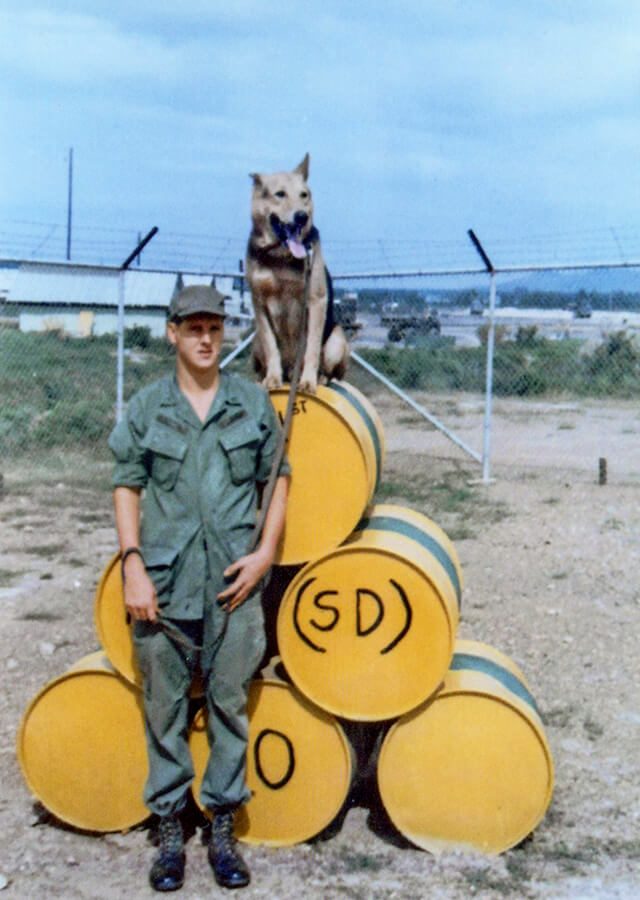 Courtesy Michael ColburnDuke, my four-legged pal and member of the K-9 unit in Okinawa, Japan, was introduced to me in April 1970. He had been an Army sentry dog for five years and had five tours of Vietnam behind him. With that much service time, Duke was well-seasoned.

During our first field training session, explosions were ignited all around us. My job was to hit the ground, and cover and protect Duke’s eyes and ears with my left arm. My thinking was a bit slow that day. Maybe it was the Japanese beer from the night before, but when the explosions went off, I froze. Duke, on the other hand, lay down and waited for me to cover his head with my arm. My training slowly kicked in and when I looked down at him, he was staring at me with his big brown eyes as if to say, Get your behind down and cover my face.

When I finally made it to the ground and covered Duke’s head, I lifted my arm to peek into his eyes. They seemed to say, “Boy, I sure got myself a real winner this time. He’s going to need some work.” (Have a new puppy? Here’s how to train it properly.)

Given Duke’s experience, the eight weeks of training went fast and easy.

Near the end of my service, I received a birthday card from my folks. It read, “We miss you! Happy 20th birthday! We hope to see you soon!” Tucked inside the card was a small note telling me that my grandmother had passed away that week. I was so sad after reading the note that I didn’t feel like doing anything. But I had to go out on patrol that night with Duke.

While on patrol, Duke did something I had never seen him do before. He dropped his head and lowered his eyes, and I could tell that he was sensing my grief. Tears ran down my face, knowing that this canine pal of mine shared my pain.

25 Best Valentine’s Day Flowers to Wow the People You Love
After Surviving a Bullet, This Police Dog Changed the Law