If You’re Stuck on a Tough Problem, Drink Some Wine—Science Says So!

Pass the Pinot! It could do wonders for your brain.

Nothing is more frustrating than the ever-elusive solution that always seems just beyond your mental grasp. Quit banging your head against your keyboard, and grab some alcohol instead. And no, we’re not telling you to drink all your problems away. Rather than clouding your thoughts, alcohol could actually boost your brainpower—seriously.

Austrian researchers call this technique “creativity on tap,” and it’s about to blow your mind. According to their study, alcohol can improve, not impair, your creativity and problem-solving skills. (Here’s what happens when you drink a glass of wine every night.)

In the study, which was published in the journal Consciousness and Cognition, participants in one group drank a small pint of beer, while the control group drank a non-alcoholic, placebo beverage. Then, the researchers showed each of them a set of unrelated words and asked the participants to make connections between them. Those in the first group scored higher on this creative problem-solving test than their sober counterparts.

Other tests revealed similar results. Only during one test, in which the participants had to come up with creative uses for common objects, did the two groups earn a similar score. But even then, the alcohol certainly didn’t hurt, either. You can also try any of these proven ways to boost your creativity.

Anyone who’s experienced a boozy night on the town has an intuitive sense of how this works. For one, “when you are really focusing on solving a problem, you can become fixated so that your mind gets stuck on one way of addressing it,” lead author Dr Mathias Benedek told the Independent. “Alcohol makes it more difficult to keep all the parameters of the task in mind, but that can also help you come at it from another direction.”

Moreover, “alcohol, which is distracting from the central task, allows you to tap into your unconscious mind and find alternative solutions,” Dr. Benedek said.

Full disclaimer, for all you winos out there: These results aren’t a free pass to chug an entire bottle every night. You should still keep in mind that this is the safest amount of alcohol to drink. Everything in moderation… right? 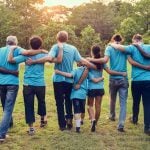 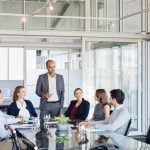