Never mind the World Series, how about a championship devoted to the best facial hair? The 2012 European Beard and Mustache 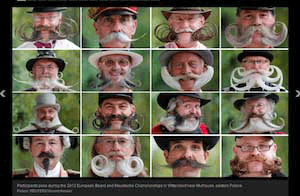 Never mind the World Series, how about a championship devoted to the best facial hair?

The 2012 European Beard and Mustache Championships recently wrapped up in France, where 100 hairy competitors put their follicular adornments to the test. There were curled beards, mustaches molded to perfect spiky points and an array of other elaborate ‘stache-styles that put this famous soup-strainer to shame. Contestants in the decades-old event competed in more than 20 categories, including Imperial and Freestyle.

Check out some of the best here. These guys can do more with their facial hair then I’ve ever been able to do to the hair on my head! (And that’s saying something, because I have a lot to work with.)

Plus, stay tuned for the U.S.’s own version of the event. Beard Team USA, a group that “promotes the appreciation of facial hair nationwide,” will host the 2012 National Beard and Mustache Championships in Las Vegas this November, which coincides with “Movember,” when men worldwide grow beards to raise awareness and funds for men’s health issues.