Can Eating Too Many Carrots Really Turn You Orange?

The "just carrots diet" will give your skin that gorgeous summer glow you’ve always wanted. 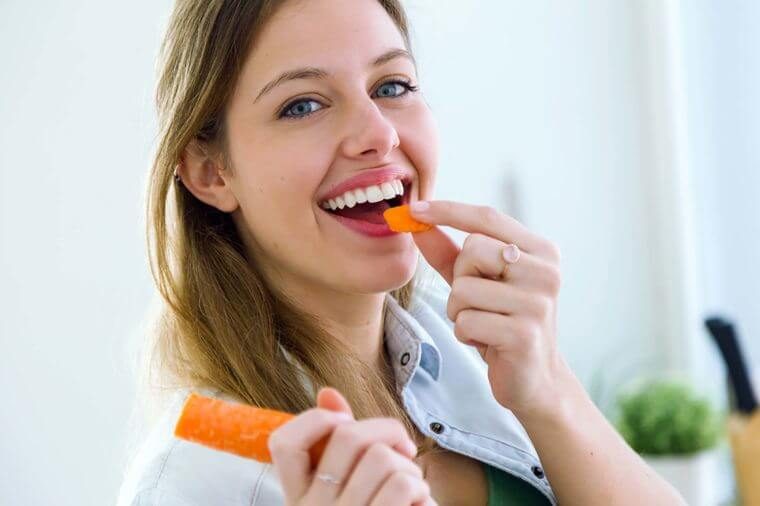 nenetus/ShutterstockIt seems that any diet is believable nowadays. In 2017, some people believe that you can subsist on a diet of just air and be fine, so it might come as no surprise that Livestrong (like the bracelets!) has a page dedicated to the “Carrot Diet.” It’s more of a fast than anything, and it seems like people swear by it—after all, eating carrots does offer a host of health benefits. But there is one key flaw in the fast, and it all has to do with your skin’s hue.

If you eat too many carrots, will your skin turn orange? Stories of turning a tangerine tone seem like the makings of an old wive’s tale, but according to Encyclopedia Britannica, they are grounded in reality. It is very much possible to see your skin color change due to excessive carrot consumption.

The science behind it is simple. It all starts with a beta-carotene, a carotenoid pigment which is rich in carrots and other orange fruits and vegetables (which is why carrots are one of a handful of carbs that you should never cut from your diet). When you digest carrots, the small intestine is tasked with converting the beta-carotene into Vitamin A, but when you overload on carrots, not all of the pigment is properly processed.

When this happens, the excess beta-carotene is spat back out into the bloodstream and then eventually permeates its way to the skin. If the excess is enough, this can lead to carotenemia, a form of artificial jaundice which causes certain parts of the skin to take on an orange glow. The most common place that carotenemia will show up is in the palms of the hands, the soles of the feet and the nose.

The condition, however, unlike regular jaundice, is harmless. According to a 1981 review of the condition, there is no link between carotenemia and Vitamin A poisoning, because the small intestine isn’t processing enough of the beta-carotene to cause a massive influx of the nutrient into the body.  The review also mentions that carrots aren’t always the culprit in cases of carotenemia; “many other yellow vegetables, as well as some green vegetables” can also change your tone.

The review also mentions a similar disorder, lycopenemia, an orange-yellow skin pigmentation which occurs as the result of consuming too many tomatoes. (Did you know that tomato juice tastes better on planes? Believe it.)